It’s an amazingly clear morning today. So clear that I suspect I saw part of the outline of Catalina Island off in the distance, between trees and buildings, on the drive to work. So clear that I decided to drive up to the park at Quail Hill in Irvine where I once spotted what I thought was Downtown Los Angeles at a distance of ~40 miles (same as the “contrast” shot in last year’s Spring Haze post). And this time, I had a better camera.

First, here’s the view from the camera, at 3x optical zoom, to give you some context.  This is looking northwest from the park.  (It occurs to me I could probably have checked the direction with my phone’s GPS info.) 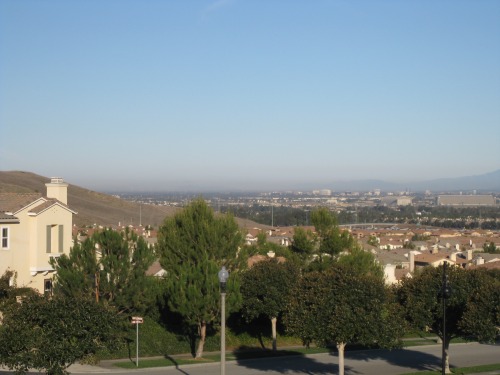 Everything’s flattened out near the horizon.  Near the right you can see the MCAS Tustin blimp hangars, with Santa Ana beyond them. The area I’m looking at is too small to see at web size, on the left side right near where the hill cuts in front of the horizon.

Here it is zoomed in and enhanced. 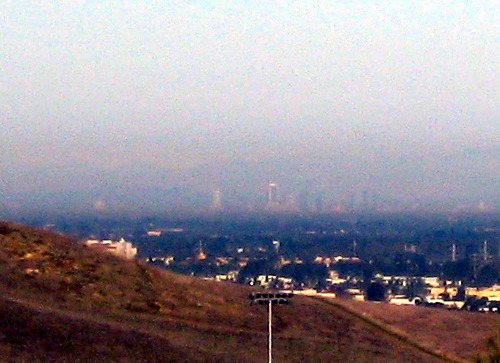 I gave it a shot with the digital zoom out to 12x, but it was way too fuzzy.  It worked out better just to crop the file and look at its native resolution.  Someday I’ll save up and get a nifty digital SLR that will save raw images instead of JPEGs, and let me swap out lenses for serious telephoto work, but for now, this is what I’ve got.

Actually, looking at the picture, I’m no longer convinced that it’s actually downtown Los Angeles.  What I can see doesn’t look clustered enough, and the buildings look shorter than I’d expect.  But I can’t think what else has a bunch of buildings tall enough to see at that distance and in that direction.

It could be that only the tops of the building are visible, in which case that black rectangle bordered in white, roughly in line with the top of the light pole, could be the top section of the Aon Center, the second-tallest building in the city and the one that’s mostly black with white corners and white around the top. But in that case the US Bank Tower (the tall round one) must be completely faded into the haze.

Or it could be Century City, which is a few miles to the west of Downtown LA, and has a couple of similar buildings (black with white outlines).  If that’s the case, though, downtown should be somewhere to the right and taller, and I just don’t see it.  And Century City would be closer to 45 miles, rather than 40.  Maybe the smog’s just thicker around downtown? Edit: This does seem more likely (see comments).

Anyway, I took some more pictures to make a panorama, which I’ll stitch together at home when I have a chance and see if it’s worth posting.

4 thoughts on “Seeing LA From Irvine?”