One of the events I made sure to hit at Comic-Con was the Flash Forward panel. Flash Forward is a new series launching on ABC this fall — you’ve probably seen ads for it — about what happens when everyone in the entire world blacks out for two minutes and has a vision of what they will be doing at a specific time in the future. This incident has two major consequences:

It’s based on the novel Flashforward by Robert J Sawyer, which I reviewed at Speed Force last December. It’s a great book, and I highly recommend it. The focus seems to be different, though: the book follows the scientists whose experiment accidentally triggered the event, in which everyone sees visions of 21 years in the future. The TV show is following, to start with anyway, an FBI agent investigating the event.

So where the book is mostly philosophical science fiction, the show looks like a mix of action, mystery and drama.

Both have, as their major theme, a single question: If you knew what your future was going to be, what would you do? Would you try to change it? Would you try to make it happen? If you saw a future you wanted, would you slack off, confident that things would work out in the end, or would you put in extra effort knowing you’d succeed?

To start with, they brought out the producers of the show, had some discussion, then ran the first two acts of the pilot episode.

Read on for a write-up and photos from the panel.

I’ll try to keep this as minimally spoilery as possible.

It starts out with Joseph Fiennes’ character crawling out of a multi-car pileup, trying to make his way through the chaos, then jumps back to “four hours earlier.” It introduces a number of characters: Fiennes’ FBI agent. His wife, a surgeon (Sonya Walger). One of her colleagues. Their daughter, the daughter’s babysitter, and the babysitter’s boyfriend. Fiennes’ AA sponsor, and finally his FBI partner (John Cho) and boss (Courtney B. Vance).

It follows each character through the morning – tailing a terrorism suspect, prepping for surgery, climbing up onto a utility pole, and in one case going out to the pier to shoot himself. Then the flashforward hits, you see Fiennes’ vision (a big bulletin board with case notes, drinking, some sort of shoot-out in the office), and then he’s back at the multi-car pileup.

From there the chaos just sort of expands — you see their immediate location, with Fiennes and Cho trying to figure out what the heck is going on, and it pulls out to bigger and bigger pictures. The show checks in with the other characters…like the surgeons who all blacked out during surgery. There’s a stunning shot of downtown Los Angeles. Let’s just say…imagine what the freeway would look like if every driver on the road blacked out at the same moment. 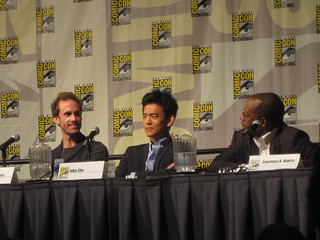 The cast came out next – Joseph Fiennes, John Cho, Courtney B. Vance, and Christine Woods, and the panel turned into a discussion followed by a question and answer session.

The first season is working up to the day of the visions: April 29, 2010. At that time we’ll see the context of what’s really going on, how people ended up in very different places from the beginning of the show, and whether the future can be changed. (That last is a huge question in the book.) They are hoping to air the first part of that story on the actual date! (Babylon 5 had a couple of good examples of how a vision of the future can be perfectly accurate, but misleading. The best is Londo’s vision of how he’ll die, in what appears to be mortal combat with G’Kar.)

They do have plans for where to go after they catch up to the visions, so future seasons won’t just be flailing around for ideas. Someone mentioned the 21-year timespan of the book, and Courtney B. Vance kept joking about how he planned to be on this show for 21 years.

There is a “game changing” moment around episode 7 or so. My guess: either that’s the point where they find out what caused the blackout, or they find out conclusively whether the future is or is not mutable.

One of the main characters did not have a vision, implying that he’ll be dead by the end of the season unless they can change the future.

Even though they’re writing a completely different story around the novel’s central concept, Robert J. Sawyer has been involved in the show and will be writing an episode.

They kept giving Joseph Fiennes grief over the fact that he wasn’t wearing baggy shirts and riding a horse.

At the end of the panel, they ran a short video montage introduced by Sonya Walger, sitting on a director’s chair in a living room wearing a bathrobe. Walger explained that she had two choices this weekend: get married, or go to Comic-Con. She made some remarks about the spandex quotient (though all the while people dressed as Spider-Man and other super-heroes were wandering around in the background) and not having to answer questions about Penny on Lost, and told us to enjoy the clip. Then she stopped talking to the camera, stepped off the chair, dropped the bathrobe to reveal a Wonder Woman costume, and shouted, “All right! Where’s my *bleep* tiara!” 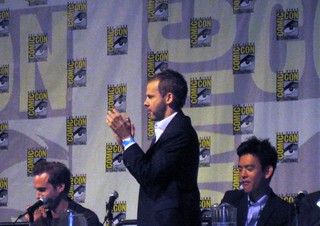 The clips hinted at what other characters had seen in the future, including one who didn’t see anything, and finished with Fiennes threatening Jack Davenport, who appeared to know something about what actually happened, who then said something about his partner…at which point Dominic Monaghan (long rumored, but not up to this point confirmed) stepped into view. What he said was lost in the general squee, but that was the end of the clip–

–And then Dominic Monaghan walked into the room. To more squeeing. Unfortunately they were running a bit over, and he was only there for about a minute before they had to end the panel. Long enough for him to sit down and say, “I play Simon.” and that was about it.