Finally got out to see Terminator: Salvation at the second-run theater. It was a passable action flick, though a bit overblown and tedious at times. I thought it was better than T3: Rise of the Machines, at least. T3 was too caught up in repeating the first two movies (a Terminator is sent back in time to kill John Connor, a guardian is sent back in time to protect him, they spend the whole time running from the Terminator, and they repeat the same stunts with bigger vehicles and explosions) and showing the origins of what we’d seen before.

While Terminator: Salvation also has the unenviable task of being both a sequel and a prequel at the same time, it manages to at least distinguish itself by going off in a new direction in terms of story. Yes, it’s the story of a prototype Terminator, how John Connor met Kyle Reese, and how John Connor became leader of the resistance, but it takes those elements as starting points and tells a story, rather than following a connect-the-dots path. (Though they did repeat a few stunts, and there are plot holes you could fly an H-K through.)

That, and T3 really annoyed me because it rejected the core theme of T2: “The future is not set. There is no fate but what we make for ourselves.” Whether that theme is actually supportable in the first two movies is debatable (especially considering that the first film appears to present a stable time loop), but this complete reversal is a bit of a slap in the face.*

I actually don’t know much about Surrogates other than the fact that it’s based on a comic book, but I saw this poster the other day and was instantly reminded of the original posters advertising Terminator: The Sarah Connor Chronicles. 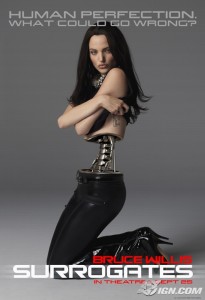 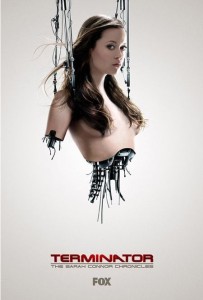 It’s not a direct reference, of course, simply a similar concept — and the image of a partially-assembled Cameron (Summer Glau) was clearly inspired by the first appearance of the Borg Queen (Alice Krige) in Star Trek: First Contact. 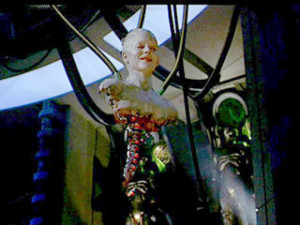 Of course, as I was reminded while looking for pictures, the Borg Queen had her own antecedents as well.

Back to the Surrogates poster, it turns out that Bleeding Cool spotted a much closer reference in the form of an entry in a Celebrity Cyborgs photo alteration contest, featuring model Kate Moss. 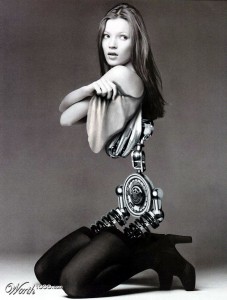 Appropriately enough, the entry was apparently inspired by an article that mentioned an upcoming movie adaptation of Surrogates…

*Regarding the “slap in the face” — that’s not really the phrase I want to use, since it implies deliberate offense and is really overused in entitled fandom. What I’m getting at is that it’s sudden and shocking, like preparing to wade out slowly into a very cold pool, then getting pushed in and doing a belly flop.

One thought on “Cyborgs: Terminator Salvation and Surrogates”