I finally made it to a Westercon! It’s been years since I’ve been to a general science-fiction/fantasy convention. The last one was WorldCon/LACon IV in 2006, but I was distracted by a summer cold and lots of DayQuil. Before that was the last Loscon I attended in 2002. So while I remembered how this sort of event is usually run, I wasn’t sure what to expect.

A Bit of Background

Westercon is a fan-run convention that travels around the western United States and Canada, similar to WorldCon on a smaller scale. It’s usually held during the Fourth of July weekend. This year it was held in Pasadena, California, and combined with the filk convention ConChord 23 to form WesterChord, Westerconchord, or simply Confirmation.

I’ve been to a couple of Westercons, but not anything you’d call recent. I remember attending one in San Diego and one in Anaheim, having a dinosaur-themed T-shirt from one year, and picking up a particular issue of The New Teen Titans in San Diego, so I think the two I attended were San Diego in 1986 and “Conosaurus” in Anaheim in 1989. Yes, it’s been twenty years since my last Westercon!

I had no trouble finding the Pasadena Hilton, but getting inside was a little tricky. The entryway was under construction, so they were routing people through one of the ballrooms, which had been set up for some sort of banquet. (More about that later.) The hotel was vaguely familiar from my memories of Loscon in the 1980s, but has been remodeled to add a coffee shop and a restaurant in the middle of the conference center. The Starbucks was most welcome, though the con was good at making sure pitchers of water and plastic cups were available in each panel room and the main hall.

Since I was only there for the day, I didn’t explore the area looking for restaurants or other activities. I just relied on Starbucks and the ad-hoc pizza, sandwich, pastry and salad counter that had been set up across the way.

Anyway, I found registration easily, but the onsite sign-up forms were on a table behind a planter. I wasn’t the only one who walked straight past them.

It was a much smaller convention than I’ve become used to in years of attending the big comic-book events like Comic-Con International, WonderCon, and Wizard World. Even Long Beach Comic Con pulled in 6,300 people its first year, but I’d count the attendance here in the hundreds.

Attendees were also older than Comic-Con on average, mostly 50+ rather than mostly around 30. Certainly there were plenty of younger fans at Westercon, and there are plenty of older fans at Comic-Con, but there does seem to be a generation gap of sorts between the two types of conventions, at least in the southern California area. At least this con seemed more alive than the last few Loscons I attended — and a lot less bitter!

Maybe it’s the literary focus. LASFS has always been very book-oriented, and there were a lot of writers among the con guests. One of the book dealers even had an entire shelf set aside for books by authors who were guests at the con.

The dealer’s room was dominated by books. I spent a lot of time looking through the used books and old fanzines, though I walked away having bought only a couple of early Robert J. Sawyer novels. There was also a lot of music, with one booth focused entirely on filk, and a lot of jewelry. 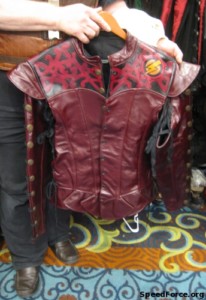 Then there were the costumes, where I discovered a renaissance-style doublet inspired by the Flash. It was way out of my price range, and I’m not sure when I would actually wear it, but it was incredibly cool!

The art show had the usual collection of fantasy– and science-fiction–inspired drawings and paintings, with one wall fully taken up by jewelry & sculpture. I suppose that’s typical, but with the size of the room, it ended up being a larger proportion than usual.

The panel rooms were extremely small, but there were a lot of different tracks of programming. That was in part because some of the panels were really talks by one person.

I ended up catching three panels over the course of the day. First up was “Blurring the Lines of Genre,” focusing on cross-genre works like crime noire/dark fantasy. The panelists were Stephen Blackmoore, Seanan McGuire, Tim Powers and Marv Wolfman. Its stated topic was what makes some genres work well together and others not, but it quickly turned into a discussion of defining genres, and defining mainstream, and the differences between genre fiction and “MFA fiction” (i.e. fiction written by and for people pursuing or holding Masters of Fine Arts degrees). Tim Powers & Seanan McGuire are a lot of fun to listen to. Tim Powers has this dry wit, and Seanan McGuire tends to pull in crazy ideas from all over the place.

Powers’ suggestion of pulling well-known movie titles (regardless of genre) out of a bucket and combining them sounds like it would make a great writing game. “It’s Gone with the Wind meets Psycho!” Come to think of it, choosing good or funny combinations would make a good Twitter game.

I was hoping to catch a panel with Larry Niven and Jerry Pournelle. Unfortunately, the first one they were on, about the basics of writing, was full by the time I got there (I shouldn’t have grabbed lunch when I did). The second was called, “Is there any science in science-fiction?” The title was so loaded I didn’t want to go near it with a ten-foot pole. (Similar panels on the schedule included “Global Warming: I’m skeptical of poor scientific practices, are you?” and “Remakes – are they necessary anymore?”)

The second panel I went to, “When is Perfection OCD?” was supposed to be about figuring out when to stop revising a creative work and just release it into the wild, but it turned into artist Marc Schirmeister’s reminiscences about working in animation: personality conflicts, studio politics, pranks. There were only a dozen people in the audience to start with, and a third of them left once topic drift set in. Two things I took away from that original topic:

I hit the last panel mainly out of curiosity: I wanted to know what Transreal SF was. The short answer is that it’s a way of combining autobiographical concerns and science-fiction tropes, as coined by author Rudy Rucker. I arrived a couple of minutes late, which unfortunately gave me a bad first impression of him because he started the panel by reading from his 1983 Transrealist Manifesto [PDF], which came off as a bit pretentious, but once he finished and started just speaking, he seemed much more personable, and the rest of the talk was very interesting.

Some panels I would have liked to check out on other days covered topics on creating fantasy worlds, past visions of the future, and especially a discussion by Tim Powers and Harry Turtledove on historical fiction. Rudy Rucker also had a talk on Sunday on New Futures in Science-Fiction, which fortunately he’s put up on his blog, so I haven’t completely missed it.

Funny thing: without planning, I ended up attending panels with three of the four guests of honor!

Remember the under-construction entryway? By the time I left around 6:00, it had been finished and re-opened. There were several women and girls in formalwear — by which I mean modern formalwear (historical outfits, especially Victorian, Regency or Renaissance, would definitely have been there for the con) — standing around near the registration area. As soon as I noticed that the hand-drawn exit signs pointing into the ballroom were gone, I realized they must be here for whatever was going on in that ballroom. I wonder what they thought of the T-shirt crowd and the tables promoting lunar exploration?

One thought on “A Day at Westercon 63: Confirmation”