Since speculating idly on replacing roadside and median grass with more drought tolerant landscaping, I’ve started noticing spots around town that have done just that — some of them on my daily commute! An office building here, a mini mall there, an island, or the sidewalk strip in front of a single house. Not a sea change, but a beginning, or at least an experiment.

I’ve also spotted a few more houses that have taken out their lawns in favor of wood chips or rocks and a less-thirsty garden. Maybe it’s the variety, maybe it’s just that the people who’ve put in the effort to convert their lawns have actually, you know, put some effort into it, but they actually look better than a lot of the lawns out there. (As renters, we don’t really have the option of replacing the lawn, but we’re trying to be smarter about our patio and the strip we manage alongside a walkway.)

Spiky shrubs, lavender flowers, agave, and tufts of scrub grass are all common. Some of the roadside strips look like well organized chaparral. Birds of Paradise are common too, but I’m not sure how well they handle low-water conditions.

On the other hand, none of that helps if you keep watering like it’s grass, or use sprinklers that water the street and sidewalk as much as the soil around the plants. Just on my lunchtime walks I’ve found patches of grass where the dirt is always on the verge of becoming mud, and driveways that always seem to have puddles below them. Someone didn’t get the memo.

And then there are the strips of bare dirt that remind me why ground cover of one sort or another is necessary: erosion has left concrete plugs sticking up out of the ground around fence posts, or brick walls leaning out toward the street.

I suppose you could go the route I saw along one street: fill the island with concrete and paint it green. But that’s not only uglier than dirt (literally), it has the critical disadvantage that when it does rain, the water doesn’t even have a chance to sink in. And we desperately need to convert that rain to groundwater instead of flushing it all out to sea. 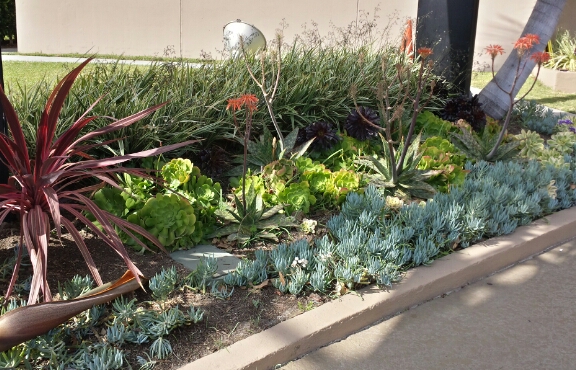