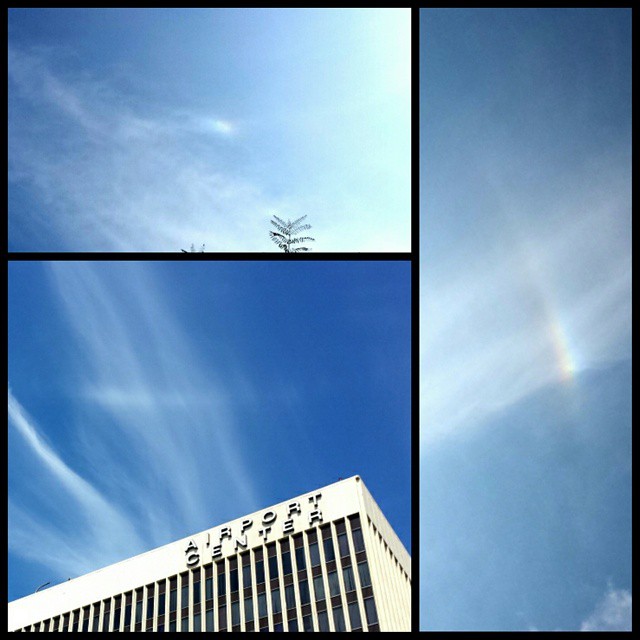 I spotted these just walking to lunch today, shortly after noon (well, DST noon). I wasn’t sure what I was seeing at first with the parhelic circle. It was clearly too smooth and regular to be part of the clouds surrounding it, but I’d never actually seen one before. Sundogs and 22-degree halos are a lot more common, even in the Los Angeles area.

After looking around for other halos, spotting the sundog and the 22°, and checking the height of both the sun and the mystery arc, I realized it was probably part of the parhelic circle, which when complete is a white circle running around the entire sky at the same altitude as the sun.

It wasn’t clear to the eye, but in the (slightly contrast-enhanced) photo of the sundog, it looks like the circle extends through it…which suggests to me that maybe I have seen it before. I’ve seen what I thought were elongated sundogs, but maybe they were sundogs with small fragments of this halo.

Halos like these are caused by reflections of sunlight inside ice crystals, sometimes near the ground and sometimes, as in this case, up in the sky. Different shapes, sizes and arrangements of crystals create different paths to the eye, which make different halos.