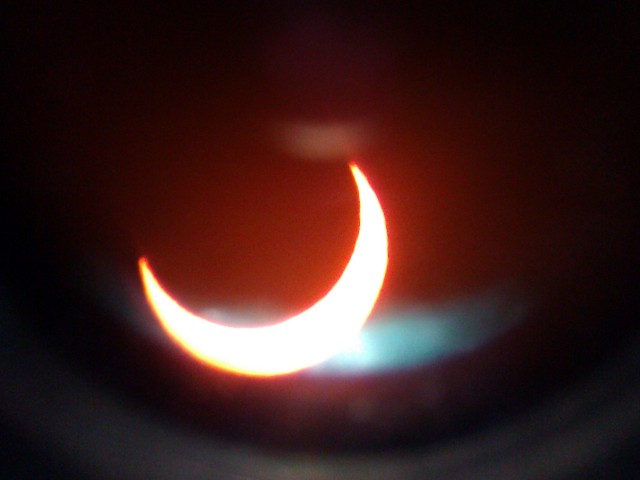 I had several plans for viewing today’s solar eclipse, depending on the weather. As the hour approached and clouds loomed in the west, I decided that my best bet would be to get above the cloud cover, and drove up into the hills to Del Cerro Park at the top of the Palos Verdes peninsula.

I’m glad I did, because a lot of other people had the same idea.

Individuals, couples, families, groups of friends, groups from schools — and everyone had a different way to see the eclipse: pinhole cameras, binoculars projecting on cardboard, welding helmets, “eclipse glasses” and more. There were also people who were just out for a day at the park, and wanted to know what was going on.

If J had been a few years older it would have been a family event for us too, but at a year and a half, I don’t think I would have been able to explain anything beyond “don’t look at the sun.” A partial eclipse is easy to miss if you’re not paying attention. 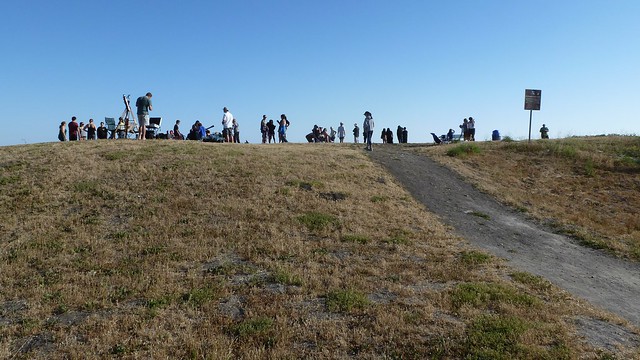 I’d cobbled together a pinhole camera the day before from two Amazon boxes, a sheet of paper, a sheet of aluminum foil, and lots and lots of packing tape. I actually started with just one box and I decided the image wasn’t big enough, so I grafted on a second. Even then it was only about 3/8″ across, but when testing it I could see the edges of clouds drifting across the sun, so I figured it would work. It did. 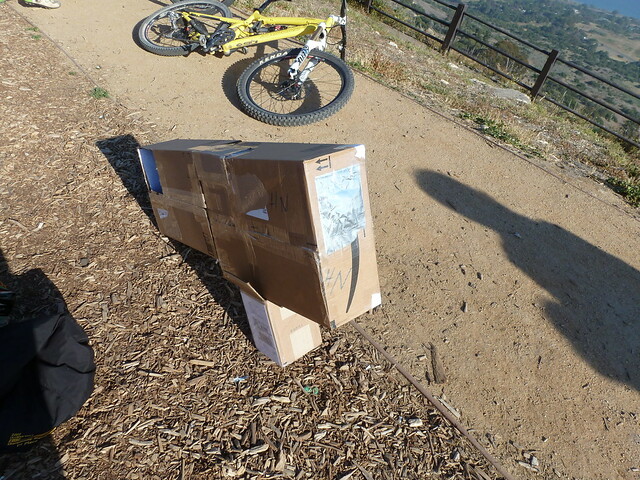 I set up “shop” near a couple who were working on their own pinhole camera, but decided that mine had a better image and used their to prop mine up. It was far from the best view of the sun, but a lot of people stopped to check it out. 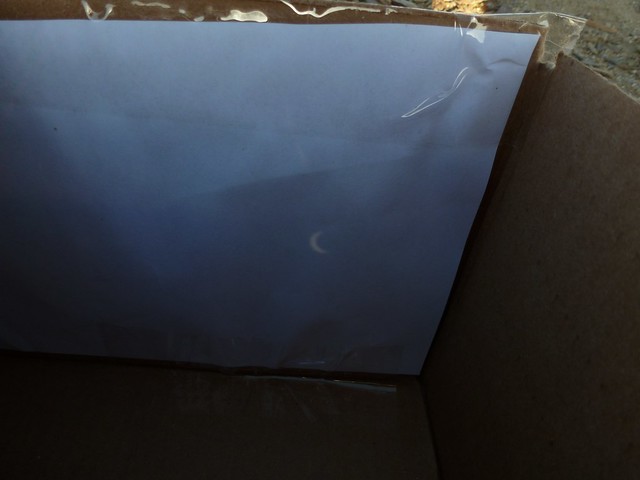 One of the groups with a filtered telescope was letting anyone walk up and take a look. It was a really impressive view: still very bright, but orange, and a lot sharper than anything I could see on the pinhole camera’s screen. I tried putting my camera up to it, but the lens was just too long. My phone, however, was just about perfect. 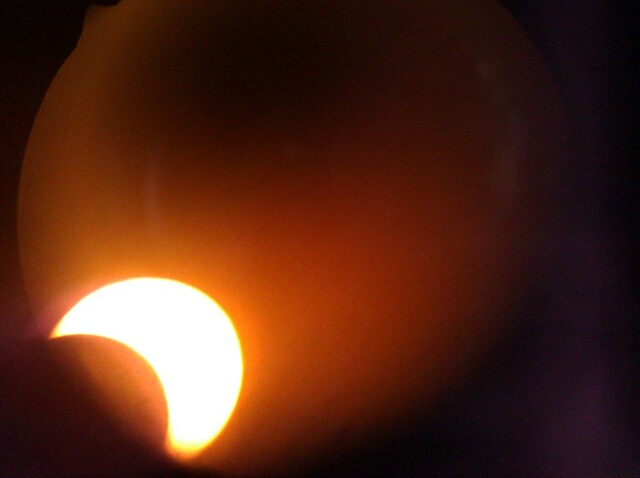 The woman whose pinhole camera ended up being used as the support for mine discovered that she could aim her iPhone a little bit away from the camera and get a fainter image of the sun in the lens flare. I was surprised that the iPhone’s lens was long enough to flare, but it also pretty much confims my suspicions about the weird lunar eclipse photo I found in a box a few years ago. Naturally, I had to try my own hand at it. 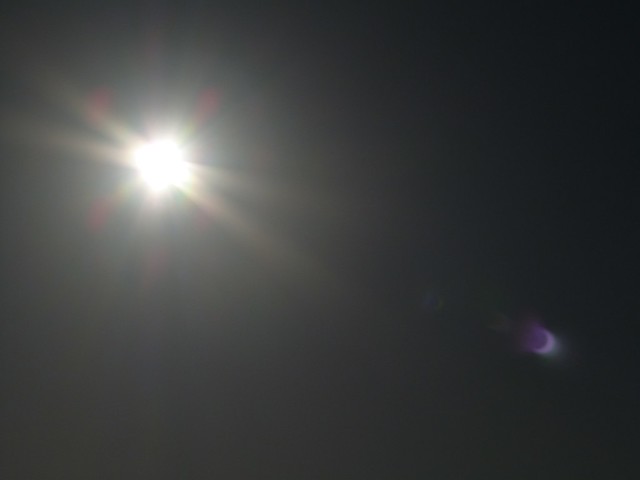 At the peak of the eclipse (what would have been totality a few hundred miles north of here), 85% of the sun’s diameter was covered. It was still too bright to look at the sun, and still broad daylight. Though it did seem dimmer, it’s hard to be certain how much of that was it being later in the day, since at 6:38 it was only about an hour before sunset.

About this point, I borrowed one of the welding helmets. It felt a lot more immediate, since I wasn’t looking at a projection or a reflection. Even the telescope, despite the large image (or perhaps in part because of it) felt more like I was looking at a picture of the eclipsed sun, which you can see anytime. Still, the welding mask made the sun look green, which made it seem a little less real.

The best were the eclipse glasses (made from fully-exposed photographic film). Not only was it immediate, because I was looking right at the sun, but the sun looked orange – much closer to expectations. I took a photo through the glasses, so you can see roughly what it looked like. 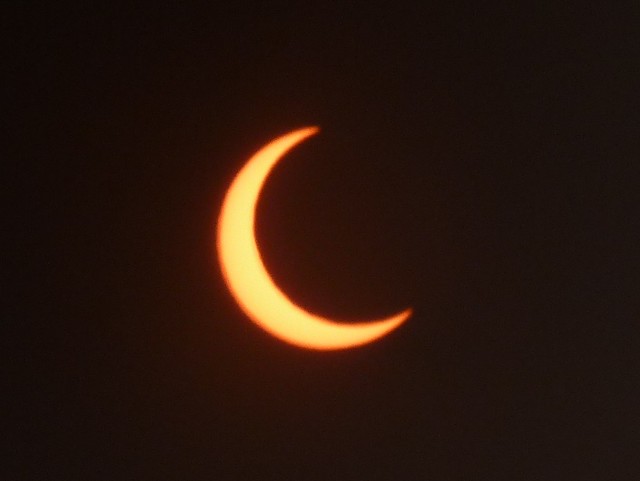 As the afternoon wore on, the fog moved inland and up the hills. When I arrived, the ridge of Catalina Island was just barely visible above a layer of clouds, and the nearby coastline was just visible below them. By an hour in, both were buried. We were starting to wonder if the fog would block the view, but it stayed well below the sun’s elevation (even if it crept up on ours). 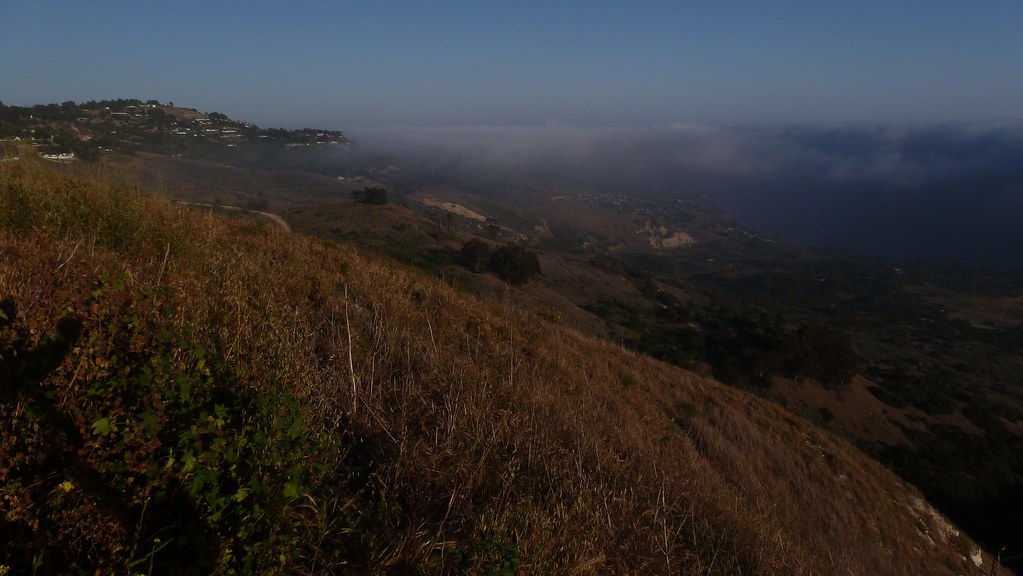 Shortly after the maximum eclipse, the college(?) group with the telescope gave the sun a round of applause. As the moon blocked less and less of the sun, people started leaving, with a mass exodus around half an hour later.

By around 7:10, the festival atmosphere was gone. Around 100 people along the hilltop ridge dwindled down to about 20 in scattered groups. It gave the park the feeling of early evening at the beach, after most of the people out swimming or sunning have left, and those left are gathering around fire pits. A few minutes later, most of them had gone too, with only a handful of us sticking around for the sunset. 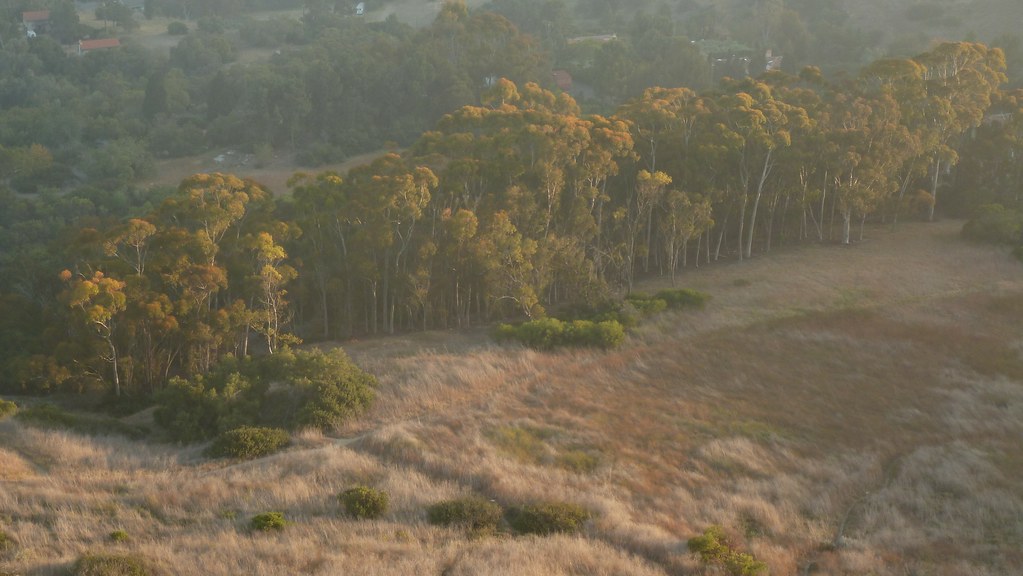 A few more people arrived after all the hubbub had died down. It’s a nice evening spot to just get away from it all and watch the sea, or the clouds, or the sunset. Locals arrived walking their dogs, and the park took on its usual feeling of solitude.

The fog pushed its way over the hills, not quite reaching the one where I stood, but pouring over the next ridge as the sun descended behind it. 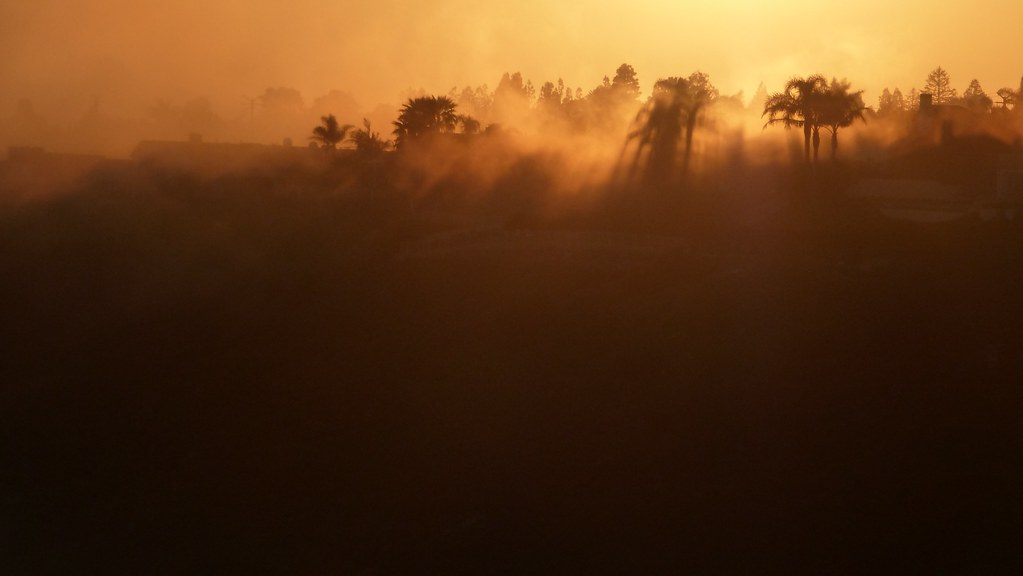 By sunset, the clouds had rolled up through the foothills, blanketing the slope down to the coast. 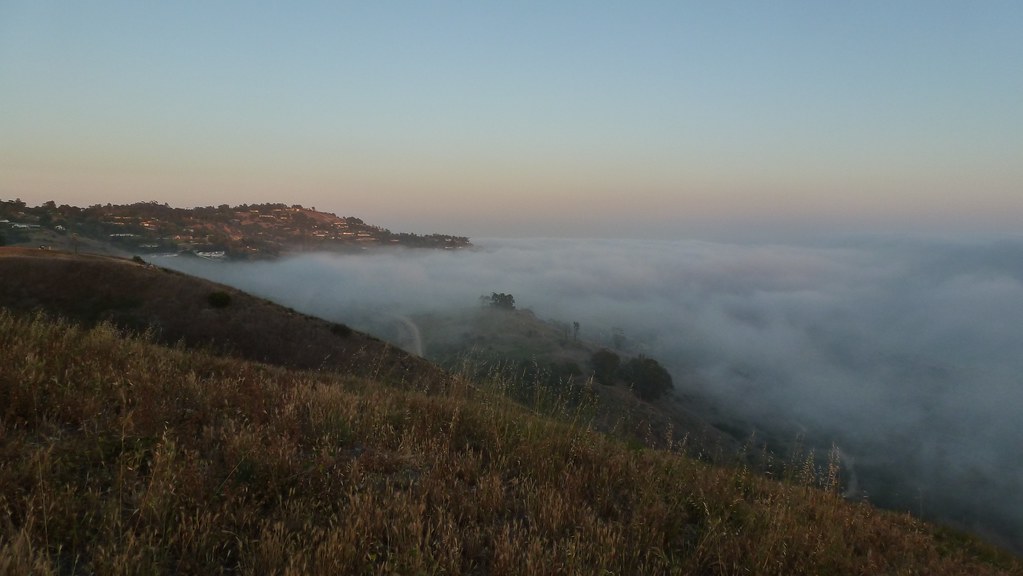 I’d half-hoped to get some shots of the setting sun while it was still eclipsed, but you really have to wait until it’s almost at the horizon…just a few minutes after the eclipse ended. I settled for the next best thing, and caught this shot of the sun “eclipsed” by a pair of trees. 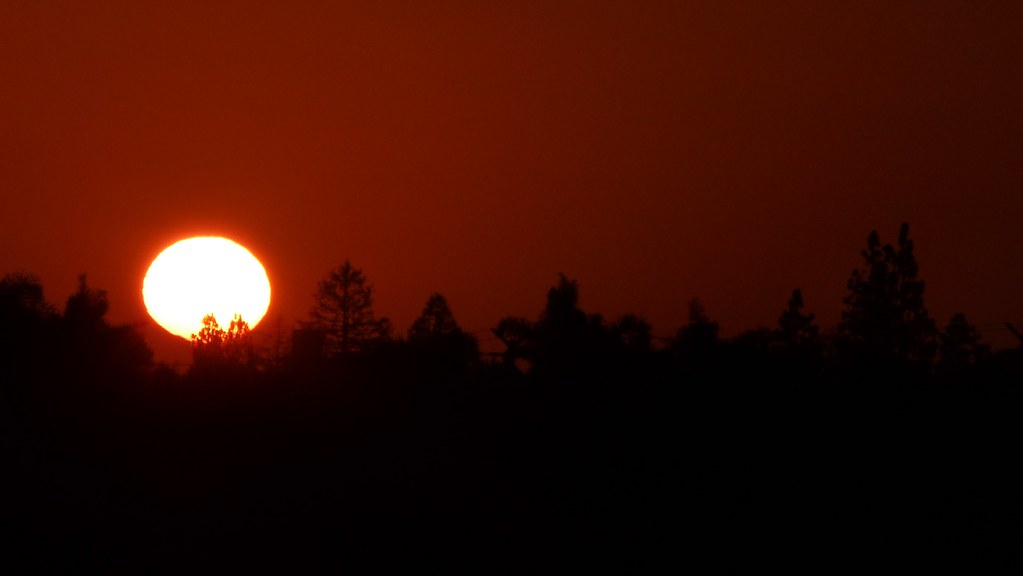 I’d left the pinhole camera by a bench facing outward toward the sea. After the sun dipped below the horizon, I walked back to retrieve it. It ended its life as a dog toy. 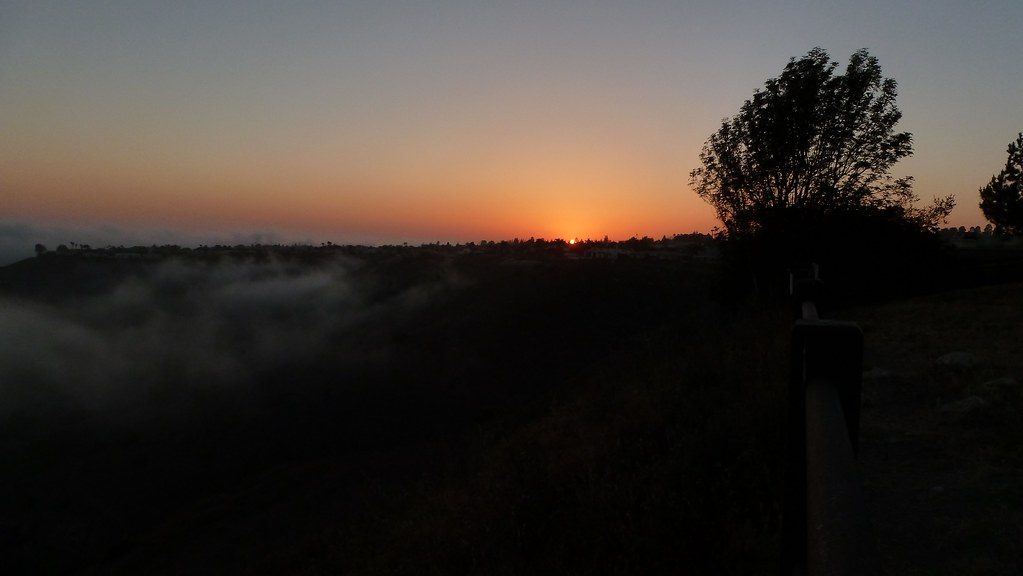