Took Minecraft Earth for a spin around the block. Most of the demos I’d seen showed either the build-on-a-plate mode or the AR adventure mode, so I wasn’t sure how the map mode was going to work. 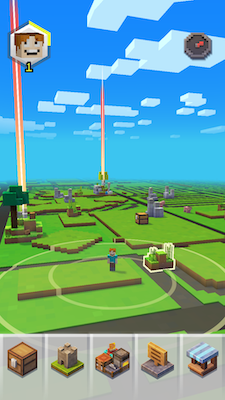 You see a Minecraft-ified version of your local area. Real-world buildings appear as raised ground instead of buildings, so that you can see where they are, but there’s no risk of mismatches between real doors and virtual ones. Clusters of resources appear on the map: trees, boulders, mounds of dirt and such, along with sheep, cows and other mobs wandering around. You can tap on them repeatedly like you’re mining in the original game, and after a few seconds you get the mob, or the logs, stone blocks, dirt, flowers, etc.

You can use these resources to craft items with familiar recipes, but each item takes time (like smelting) instead of a shape. It might take 30 seconds to turn a log into planks, or three minutes to make a sword. There are three slots for the crafting table and three for the furnace, with one each unlocked at the beginning of gameplay. I’m guessing you unlock the others as you level up.

Resources seem to regenerate quickly – I saw them pop into existence a couple of times on my walk around the block, and there was already a new tree when I got back where I started.

You can also see a circle (I know, a circle! In Minecraft!) on the map showing what’s close enough to interact with, and whenever something crosses that circle, the phone will vibrate briefly to let you know.

A nice touch: If you’re moving faster than walking speed (or if it thinks you are due to GPS drift), it shows your avatar rolling in a mine cart!

Speaking of avatars, if you’ve used the new character creator in recent releases of Bedrock edition, that skin automatically transfers to this game.

Actually playing “adventures” is a bit weird. This is the gameplay they showed during Minecon. At certain spots, you can jump into an augmented-reality instance (the one I tried was roughly a 5 block by 5 block column) with items you’ve crafted or collected. You can fight zombies, find treasure chests, etc. It’s cool, but because you can’t physically move up or down, just around, it’s sort of like walking around a hole in the ground and trying to interact with stuff that’s way below you.

Anyway, I’ve spent longer writing about it than playing so far. I’ll have to take some time to really explore it and get a better sense of the gameplay. And try out the build plates.

But even at first glance, it’s a distinct experience compared to Pokemon Go, and not just a rehash with a different theme!

With Pokemon Go, you have fixed locations for supplies and combat. It’s all about getting you out to walk that distance and find Pokemon along the way. There are even multiple rewards solely for distance walked (candy, hatching eggs, evolving certain Pokemon).

With Minecraft Earth, everything is randomly placed, closer together, and visible from farther away: resources, mobs, adventures. (And you can use a build plate anywhere.) It looks more like a Minecraft world than a map, and it feels like you could play it in a smaller space if you wanted to.