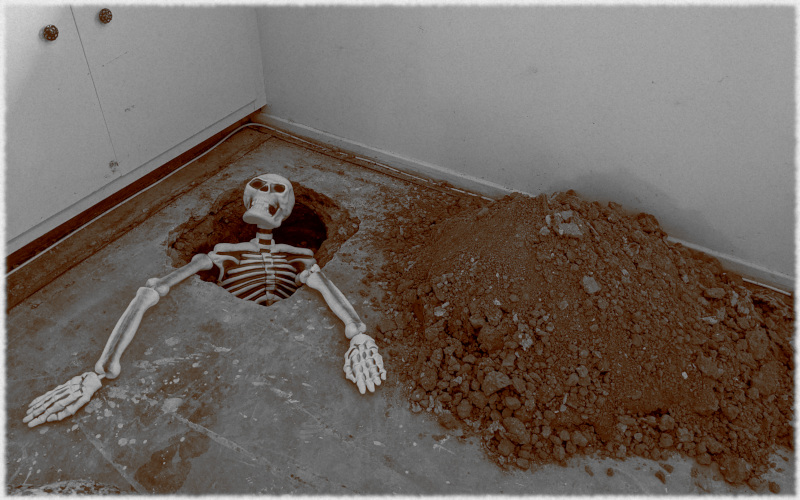 If you’re stuck with plumbers digging up your dining room floor to fix a leak under the slab foundation a few days before Halloween…you might as well make the most of it!

Earlier this week we found water seeping into our carpet from the slab underneath. The plumbers came out, tried to determine where the actual leak was, checked the apartment next door, tried to figure out whether they could just reroute some pipes, and finally checked with the owner, rolled the carpet up, and jackhammered a hole in the floor.

Well, it turned out it was in the neighbors’ apartment after all, but instead of leaking where they could see it, it was leaking behind their dishwasher, under the wall, under the cabinets, and then welling up into our place.

But it still needs to dry before they can patch it up.

So we’ve got this 1½-foot square hole in the floor, and a pile of dirt next to it. Something still smells like a kitchen drain, but that could just be what was already soaked. And everything that was in the dining room is cluttering up other rooms. Including the table, which only has room for one chair right now. On the plus side, we threw out some junk and consolidated some stuff while clearing the room.

And I bet they’ll get a kick out of the plastic skeleton when they come back on Monday!