Catching up on interesting links from the past week.

Enter Sandman: Who wrote “Footprints”? You’ve probably read the poem, or heard it, in which the narrator dreams of walking along a beach with God, and looking back and noting how many sets of footprints there are at different points in their life. It turns out at least four people claim authorship. (via Neil Gaiman) 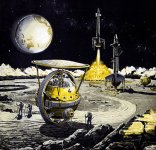 Retro-Future: To the Stars! Science-fiction illustrations from 1930–1970, many of them from Soviet/Eastern Bloc countries. (via Slashdot, though I noticed it popped up again today on The Beat)

My Son’s Food Allergies: Danger Every Day: An essay on a family dealing with their toddler’s serious (i.e. life-threatening) food allergies. I am so glad I didn’t have things this bad when I was younger. Fortunately for me, mine didn’t get really dangerous until I was around 17 or 18—just in time to go off to college and get exposed to all kinds of strange food! (Found on CNN)

Citizens Against Ugly Street Spam (CAUSS): volunteer group that tears down unsightly (and illegal) signs stapled to telephone poles and such. I saw their site a few years ago, but had no idea that they were not only still around, but had expanded to multiple cities. (again, via ***Dave)