Walking around the house last night, setting all the clocks to Daylight Saving Time before bed, I found myself thinking: Why do we have so many clocks, anyway? They used to share one clock for a whole town!

OK, that’s not feasible these days, but every time we switch into and out of DST I miss some clocks because we have so many in the apartment, even though there are only three people.

And that’s not counting the devices that automatically pull from a canonical time source over the internet. Every phone, computer, tablet or ebook reader tracks time, but at least they adjust themselves automatically!

Some of these we placed intentionally, like the wall clocks. Some need to track current time internally to function properly or to keep track of when things happened, like the phones and cameras. But some are just kind of extras.

The microwave doesn’t need a clock. It needs a countdown timer, yes, but the clock is just kind of there as something for the display to show when you’re not using it. I guess since they’re already building the timer circuitry into it, tracking current time doesn’t add much complexity. Same with the oven timer (countdown again) and the stereo (track/album length). Anything that has a display that might show hours/minutes/seconds for some purpose seems to get a clock as its default display. Whether you need it there or not.

Anyway, the upshot is, we have a ridiculous number of clocks for the number of rooms and people here. We always have the time, even though we never seem to have time.

Now I want to write a story about how time goes faster as you get older because you keep adding more clocks, and they use it up.

Google Photos is overcompensating for the Daylight Saving Time switch on yesterday’s pictures. Photos taken at 6:00pm are labeled as 7:00pm. Everything from this summer/early fall (which might as well have been summer) is off, in the app anyway (the website shows the right time in PDT), which at least makes more sense than if it had only been one day. The weird thing: it’s not even showing the time in today’s timezone by mistake. It’s adjusting it the other way.

My best guess: There used to be a DST bug in Google Photos, but they adjusted for it. Now the bug’s been fixed, but the adjustment is still there. 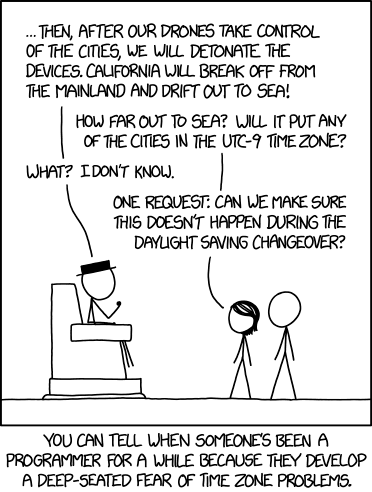 I literally found out yesterday about today’s partial solar eclipse. Unlike the last one visible from Southern California in 2012, which was conveniently on a weekend, this ended up being right in the middle of the work day. Add in a lot of other stuff going on, and I didn’t have time to do anything like go out to a prime viewing spot or make a giant pinhole camera.

My original plan was to take a late lunch, see what I could see, then try to head back outside at the point of greatest eclipse. I sat on a bench in the courtyard, surrounded by trees, checking a tiny pinhole camera I’d made from a tea box at the last minute and also looking for a good spot with images projected through the tree leaves.

After about half an hour I started to wonder why I wasn’t seeing any signs of eclipse, and looked up the times again. Apparently the calculator I used didn’t account for daylight saving time. The good thing about that: I was early, not late. The bad thing: Greatest eclipse was actually going to be during/shortly after a production switchover at work that I needed to be on hand for.

So I headed back outside around 2:50 to look at the clusters of eclipsed suns projected by the leaves in the shady courtyard. 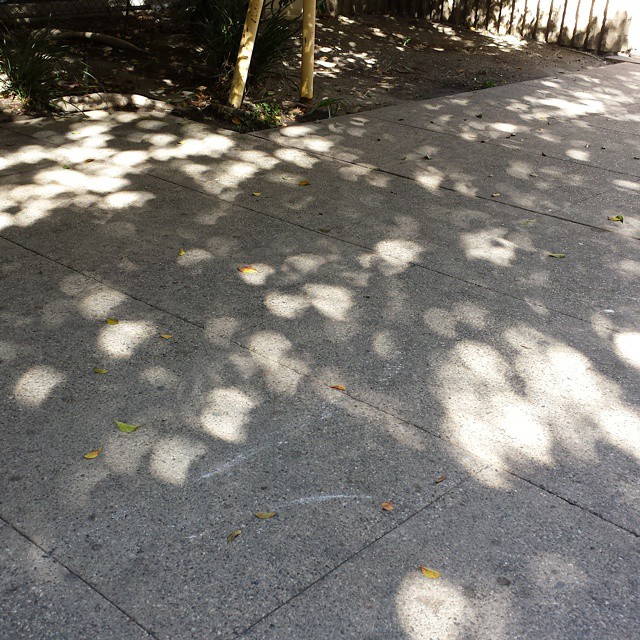