It seems fitting that I’d eventually write a post with this title, seeing as how the regular LA Times column is where I got the name for the Only in San Diego series.

We were up in Los Angeles for a wedding on Wednesday and Thursday. Since we were both involved, we stayed in a hotel instead of driving up and back two days in a row. (I’ve made that drive in 40 minutes. It took us nearly two hours on Wednesday.)

First up: the hotel. You may recall we found an interesting combination in the nightstand drawer the last time we stayed in Las Vegas. Here we found another combination, somehow appropriate for LA: 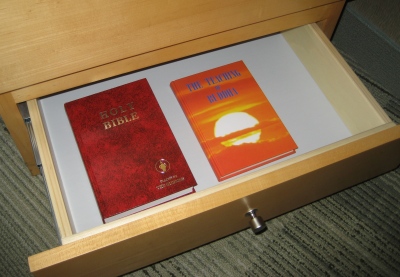 The Bible, of course, had been provided by the Gideons. The name plate on The Teaching of Buddha indicated it had been placed there by the Society for Buddhist Understanding.

Then, of course, there’s this place. We’ve been told that “Happy cows come from California,” but they never tell you where they go…

I had a few hours free the morning of the wedding (the bridesmaids had an earlier call time), so I walked around downtown Los Angeles a bit. The Disney Concert Hall is weird, of course, but it’s well-known weird.

Now, to a fan of Buffy the Vampire Slayer and Angel, the name “Angelus” has a somewhat sinister connotation: 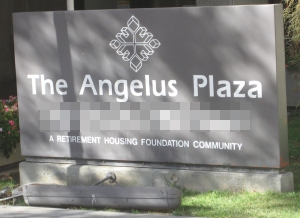 Finally, you may think you’ve seen truckloads of FUD coming from places like Microsoft, but we actually saw a literal truckful of FUD. 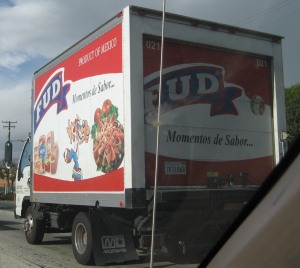 It turns out to be a Mexican company that sells meats, playing on the pronunciation (“fud” in Spanish would sound like “food” in English). They’ve recently licensed the brand in the US, focusing on “areas of heavy Mexican immigration where the brand name is already well known”—in other words, areas like Southern California.

That’s it for now. Maybe I’ll post some of my sightseeing photos next year (i.e. tomorrow).