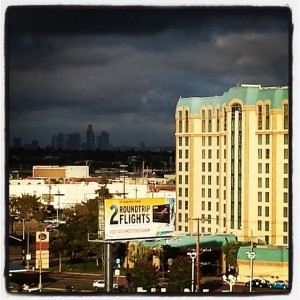 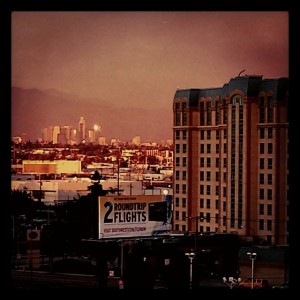 I went out for a brief walk Thursday afternoon (sometimes you just need fresh air). It had been raining, but had stopped, and the sun had broken through the clouds. Something made me go up to the top of the nearby parking structure where I could see downtown Los Angeles. It turned out to still be completely in shadow, as the gloom stretched inland. But it made for a great contrast with the sunlit hotel in the foreground.

The next day, another of intermittent rain and sun, I glanced out my office window shortly before sunset and took another short walk, this time straight to the parking structure for a better view of the mountains. The sun was sinking past open patches in the cloud layer, and I realized it was only a matter of time before it lit up the city in the distance.

Sure enough, a few minutes later, downtown Los Angeles was lit up by the sunset, and while I was at the wrong angle to see the towers turn completely orange as I did once on the train nearly three years ago, I was able to line up the same angle as the photo from the previous day…because this time the nearby hotel was the building in shadow.

With luck the people complaining about the “unseasonable” morning cloud cover have all realized we get the same thing every year. Although I don’t think it usually lasts this far into July. We were standing at the America Plaza transfer station on Thursday morning, watching the fog roll in past the buildings at the south end, but by the time we hit the Gaslamp district for lunch, it was all cleared away.

We noticed an interesting coastal climate zone, though. On the trip down Wednesday afternoon, the clouds came in somewhere around Mission Viejo or San Juan Capistrano and stayed locked in all the way through La Jolla. It finally started clearing up just as we were reaching San Diego. Then on the trip back, a bit later in the afternoon on Sunday, the clouds rolled in as we reached La Jolla and didn’t break up until we reached Mission Viejo. We stopped in San Clemente for coffee (it was a long weekend with lots of walking and not much sleep), and the barista asked us if we’d been to Oceanfest, adding that it wasn’t really a good day for it. We explained we were on our way back from San Diego, he asked whether it was better down there, and we told him that it was warm and clear—but only south of La Jolla.