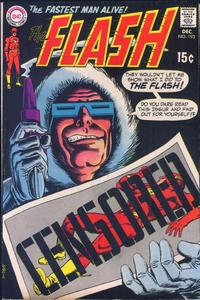 Now, I agree—that cover was way past the line, and I can’t imagine DC or Marvel doing the same thing with male characters, especially when you take into account the sleaze factor. But phrases like “never, ever” tend to read like a challenge. Looking just at the defiant/passive stance, I knew I’d seen at least one cover with the Flash beaten to within an inch of his life, unable to put up a fight or even a glare, so I took a trip through the Grand Comics Database’s cover gallery. END_OF_DOCUMENT_TOKEN_TO_BE_REPLACED