I’ve been using desktop computers most of my life, laptops since my teens, a smartphone for about four years and a Nexus 7 tablet for about two months. I’m starting to get a sense of where the tablet fits in my overall computer usage, and with the release of the iPad Mini and upgraded Nexus 7 models, I figured it was time to write about it.

One thing I’ve found interesting is that, all other things being equal, I’d almost always prefer using the tablet to my smartphone for anything that takes longer than a minute. What makes the smartphone great is that it’s ultra-portable. If I’m running errands or anything else, I just put it in my pocket and forget about it. I walk around normally, and it’s there when I need it to check messages, post a status update, moderate comments, check directions, pull up a grocery list, take a picture, or yes, make or take a phone call.

But if I’m going to sit down for 10 minutes or more to read, to reply to email, to blog, or really much of anything else, I’d rather use the tablet. It’s easier to read. It’s easier to see things at a glance. Websites designed for desktop use work better since the screen is bigger. Apps are easier to use on the tablet than the phone, at least those designed to take advantage of it. The 7″ tablet is a great size for reading, just a little wider than a paperback book, easy to hold up while on the couch, in bed, at a table, or anywhere else.

I’m a lot faster at typing on the tablet than on the phone, and it’s certainly easier to compose when you can see more of what you’re writing. One downside of a 7″ tablet rather than a 10″: The keyboard takes up a lot of screen space in landscape mode, which is the mode I type fastest in because of my years typing on real keyboards.

When we were on vacation for 10 days, I used the Nexus 7 heavily. The only times I fired up the laptop were for photo management (this seems to be a recurring theme) and for one round of blogging.

As far as the tablet vs. the desktop, I like the tablet because I can so easily take it anywhere in the house. It’s the way to get through a morning’s email, Facebook, and news site rounds while eating breakfast. I can lie on the couch (well, in theory), kick back in the easy chair, prop myself up in bed — anywhere. I’m not tied to my desk, or to the places I can set a laptop, and I don’t have close it and wake it up again if I want to move to another room.

The main obstacle I find to using the tablet at home is that my almost-2-year old son loves using it himself to play games, read interactive kids’ books, and watch videos. We limit his time, but whenever I pick it up, it reminds him it’s here, and we have to go through another round of “Not now.” and “Ninja!” and “No, I’m using this right now, you’ve already had plenty of time on it tonight” before he decides he’s happy going back to his toys or books (which of course he wants me to read to him now…)

A desktop is still better for some tasks, though. A full (or at least laptop) sized physical keyboard trumps a virtual keyboard for serious writing or especially editing, whether it’s text or code. (A mouse makes editing a lot easier. I keep fat-fingering when trying to use a touchscreen to select & rearrange text, and I’m a lot slower with a touchpad than an actual mouse.) I’m still trying out image editors on Android. And of course there’s the storage factor: you can always plug another hard drive into your desktop to store more photos (or music, or video, or raw images, or…), but mobile devices are a lot more limited. (No, I haven’t migrated all my personal data to the cloud.)

Even with web applications and cross-platform services that offer mobile apps, there are a lot of sites that haven’t quite figured out how to tell a tablet from a smartphone, or that leave out functionality in their mobile apps. For example: until a couple of weeks ago, you couldn’t manage a Google+ page using the Android app (and you still can’t with the mobile-optimized website as far as I know), and even now it’s kind of clunky: you have to sign out and sign back in as the page.

So there you have it: One data point of how a 7″ tablet gets used in real life. It’s different enough from a smartphone that it’s worth having both, though I can’t really compare usage of the 7″ and 10″ form factors. That said, having the smaller tablet, I don’t really feel a need for a larger one.

Update: Something that came up in the Google+ discussion is connectivity. The model I have is wi-fi only, which was a calculated trade-off at the time, but is basically my only regret when it comes to buying the Nexus 7. It works great where wi-fi is available (home, office, coffee shops, hotel lobbies), and I can use my phone as a mobile hotspot where it isn’t…but that drains the battery, and it means fiddling with an extra device, waiting for it to start up, etc. Of course, now Google has a Nexus 7 with mobile data access, so if I were buying it today, that’s what I’d get. 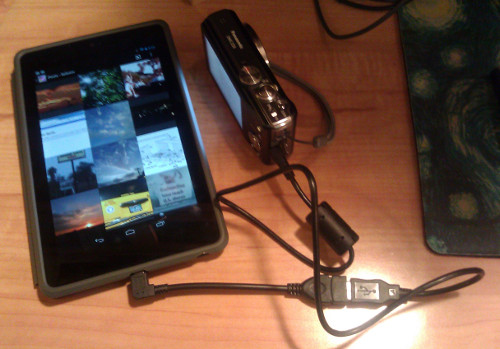 All right! I’ve verified that my Nexus 7 can read photos from my camera!

The tablet supports a subset of USB OTG (On The Go), which also lets it connect to keyboards, mice and external storage. It only has a micro-USB port, which means I had to get a $1 USB cable adapter, but for that price? Big deal.

If I put the camera in PTP mode, it can import directly to the gallery. If I put it in PC mode, I can use the Nexus Media Importer app. And I can use FlickFolio to upload multiple photos to Flickr at once.

This is something I’ve wanted the ability to do for a long time, since before Apple redefined tablet computing and I was considering getting a netbook. And unlike a netbook, which I would have only used while traveling, I use the tablet every day.

Photo: Why I still need a good camera in addition to my phone. OK, that’s a bit of an exaggeration: The phone isn’t really that bad when used under good lighting, or with the flash (though the Lumix is a lot better, and has an awesome optical zoom). It’s just that the picture with the flash, while sharp, showed the smudges better than the images on the screen.

Overall I like having Chrome on my Nexus 7, but there are a couple of things about it that bug me.

First: You can’t hide the tabs and search/URL bar. That’s not a problem in portrait mode, but in landscape mode, it takes up way too much screen space. Otherwise the tablet would be perfect for things like reading comics at Thrillbent.

Second: Bookmarklets are tricky. Because on Android Chrome loads your bookmarks in a new tab, not a menu, when you tap on a bookmarklet, it acts on a blank page, not on the page you wanted to use it for. If you have an app that provides a sharing intent, no big deal. You just share the page to that app, and you’re done. But if you want to run something on the page, or share it with a website that has a bookmarklet but not an app (like, say, Pinterest or Timely), it would be nice to be able to run them.

As it turns out, you can use bookmarklets in Chrome through the search bar!

Not quite as easy as tapping a button, but close! 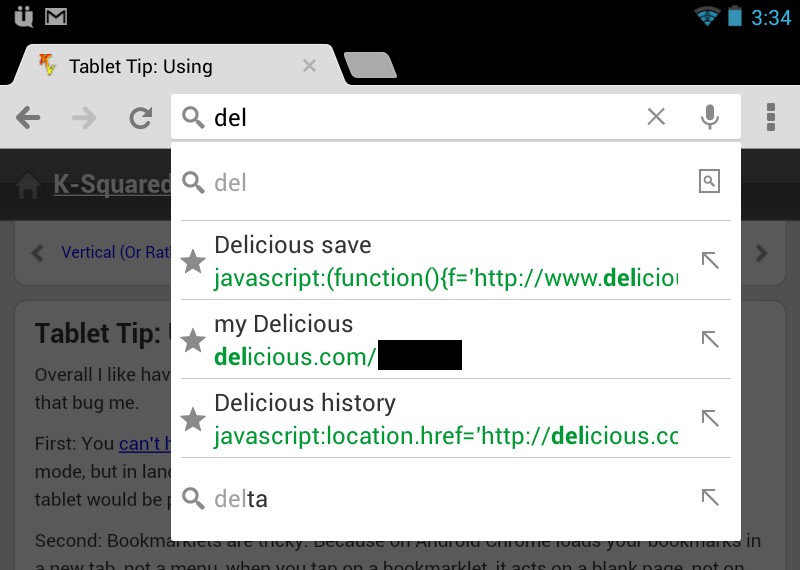 Ah, memories! These days, setting up hardware on Linux is often easier than it is in Windows. Lots of drivers are built-in and auto-detected, and many are provided through a distribution channel that makes it almost as easy.

Wireless networking, however, is a bit of a throwback to the old days. Half the hardware doesn’t have Linux drivers, and half of the devices that do require you to hunt for the driver — based on the chipset, of course, not on the name or model number on the box — and compile it yourself. (At least these days, you can sometimes run a tool to adapt the Windows drivers if there’s no native Linux option.)

The steps I actually needed to take to set up wifi on my Fedora 13 desktop probably only amounted to about 10 minutes. Unfortunately it took a lot of false starts to get there. I had installed a Zonet ZEW1642 PCI card, which my initial research suggested would be supported by the built-in rt2860 drivers. As it turned out, it wasn’t that simple. END_OF_DOCUMENT_TOKEN_TO_BE_REPLACED

Last night I noticed @BadAstronomer posting ideas for a Twitter meme, #fishpopstars. It’s pretty much what you’d expect: take a singer or band name and make a pun with the name of a fish.

Katie and I came up with these:

Some favorites from the event:

It looks like it’s still going on if you’re in the mood for fish puns.