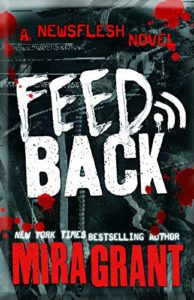 While reading Feedback, it occurred to me that Mira Grant’s Newsflesh series features the worst-case scenario of zombie design, and yet humanity survives with civilization mostly intact. That’s impressively optimistic.

I mean, look at the parameters of how zombies work in this setting:

Everyone who dies becomes a zombie, regardless of whether they’ve ever been near a zombie. This is fairly common, but there are settings where you can keep zombies out with a quarantine. Not this one.

Anyone who goes out in the field must go through decontamination when they return. Showers include a standard bleach cycle and won’t let you out until it’s done. Outbreak sites have to be hosed down with bleach, burned, or simply condemned.

Any blood that’s been outside the body long enough will trigger conversion on exposure, even if the person isn’t a zombie. Even your own blood.

Sometimes people spontaneously convert. It’s not common, but it’s been known to happen.

The newly-infected can be as fast as a normal person before their body starts decaying. (Yep, fast zombies and slow zombies in the same ‘verse.)

Mobs of zombies can plan ambushes. Enough zombies together exhibit just enough rudimentary intelligence to set a trap. Even across species.

There’s a really scary twist in the virus’ transmissibility late in the second novel that I won’t spoil.

The only factor that isn’t maxed-out is their indestructibility. A zombie in the middle of the desert or at the bottom of the ocean will eventually starve.

And yet humanity survives the Rising and is able to rebuild civilization in many — not all, but many — parts of the world. 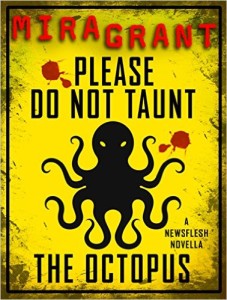 “That means the vampires are gonna come out!”

This weekend I finally watched Evil Dead 2. Aside from some nifty low-budget cinematography, it mostly confirmed that the only movie in the trilogy I actually like is Army of Darkness. Not surprising, since I like the sword and sorcery genre better than horror to begin with.

I also started thinking about what sets the Evil Dead trilogy apart from other 1980s horror series: instead of focusing on the villains, the later installments are all about the hero.

Friday the 13th? All about Jason. Nightmare on Elm Street? Freddie Kruger. Hellraiser? Pinhead and the Cenobites.

At the comic store today, I noticed that there’s a whole line of sequel comics, focusing again on Ash (including “Ash Saves Obama”). But they’re not titled Evil Dead. They’re all Army of Darkness. It must have greater name recognition.

Last weekend I watched Bride of Frankenstein. It’s a good movie, but the framing sequence bugs me. In it, Lord Byron is telling Mary Shelley how much he enjoyed her tale of horror, and proceeds to revisit the high points in the 1935 version of “Previously, in Frankenstein…” Unfortunately, just about everything he mentions wasn’t in her book! (Neither the 1818 or 1831 versions.) He then bemoans that it should have ended so abruptly, at which point she says something like, “Ended? That wasn’t the end at all!” and proceeds to tell Percy Shelley and Lord Byron the tale of, well, the next movie.

All this, despite the fact that the movies clearly take place in the 20th century, though they at least went to the effort to dress Byron and the Shelleys in period costumes.

On one hand, it’s a nifty conceit, made somehow more appropriate by casting the same actress, Elsa Lanchester, as both Mary Shelley and the Bride.

On the other hand, it’s emblematic of Hollywood’s mixed demand and contempt for original source material and its authors. This is the industry that brought us both Bram Stoker’s Dracula and Mary Shelley’s Frankenstein, trading on the author’s name as a claim of authenticity while still taking things in their own direction. (To be fair, both movies made efforts to include aspects of the original stories that are usually left out. And MSF followed quite well until about 5 minutes before the end, at which point it took a 90° turn and flew off into another movie entirely.)

Neil Gaiman says it best in his short story, “The Goldfish Pool and Other Stories” (in Smoke and Mirrors):

She managed a pitying look, of the kind that only people who know that books are, at best, properties on which films can be loosely based, can bestow on the rest of us.