I mentioned last week that Manhattan Beach had closed all their parks outright, rather than just closing equipment and facilities. Over the weekend heat wave, they reopened at least Polliwog Park, taking down the caution tape from the perimeter and instead wrapping individual playgrounds, gazebos, sculptures and even picnic tables with metal fencing.

And signs. Signs and fences everywhere. 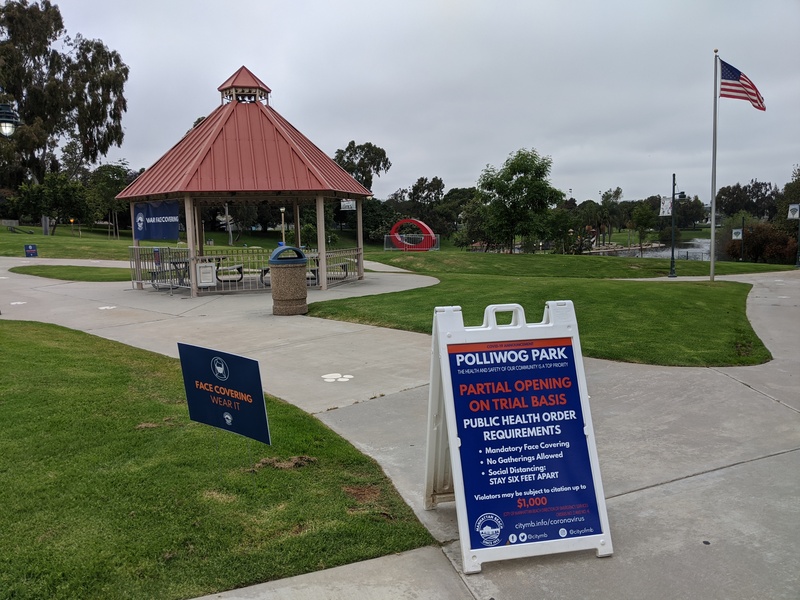 I’d been able to see at least some of the signs from the side of the road last week, reminding you of the Covid-19 mantras: Cover your face. Keep six feet apart. Stay home if you’re sick.

And then there were signs like the one above explaining that yes, the park open again — but only on a trial basis, and you have to follow the rules! There was even a police car parked on the lawn to show they meant business, though I’m not sure where the officer was. It’s a big park.

And then there were these, posted on all those portable fences. 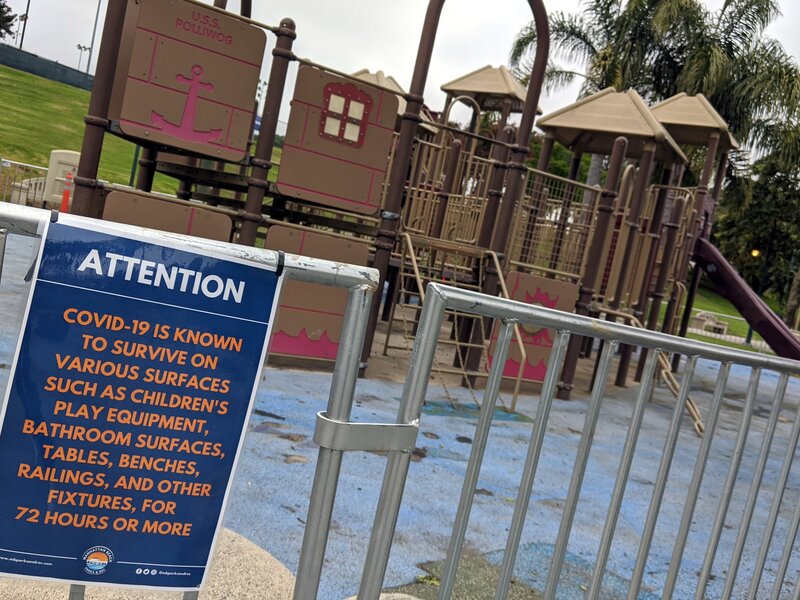 Some cities around here have just wrapped their playgrounds in caution tape. Manhattan Beach wants to make sure you know why it’s closed.

Even the interactive art installations. 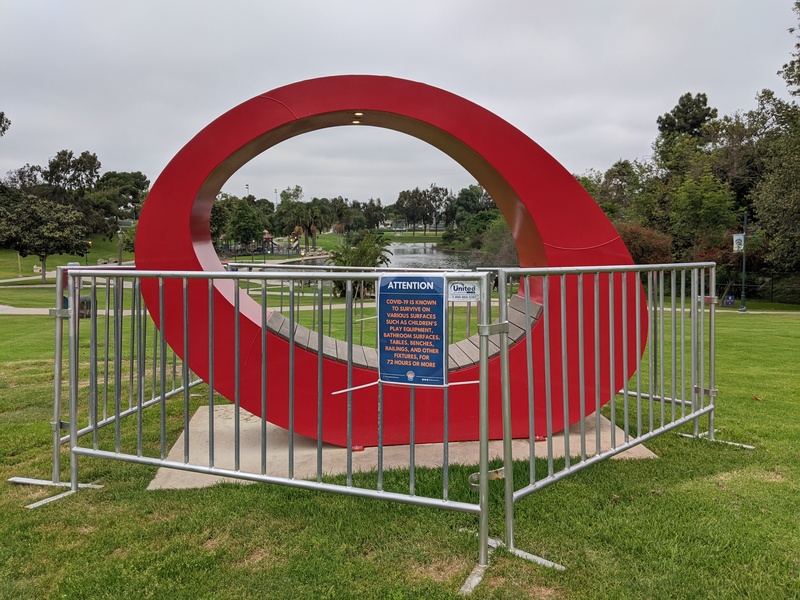 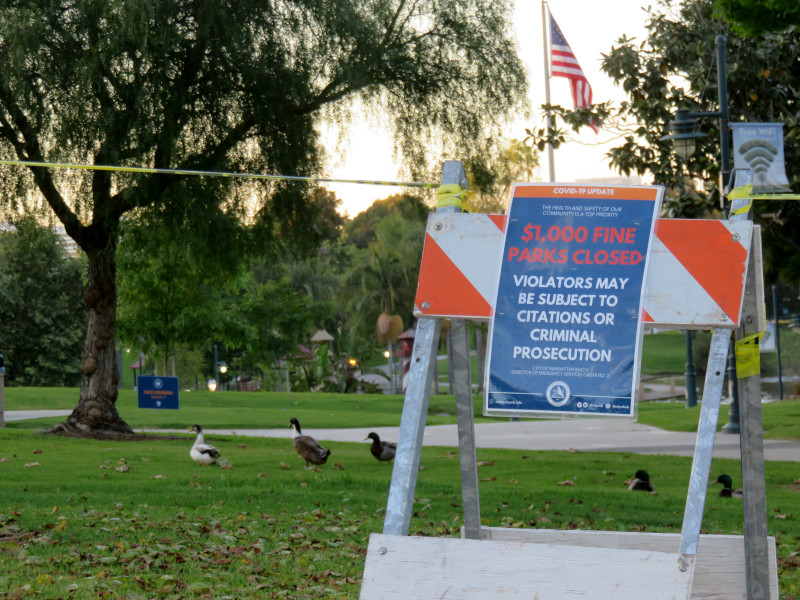 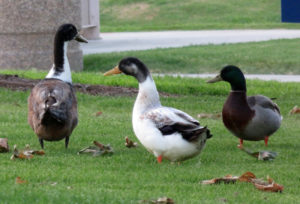 While some cities around here have only closed playgrounds and sports facilities at their parks, Manhattan Beach has closed their parks outright. Polliwog Park has a large pond year-round that attracts ducks, geese, coots, herons and more, plus the local gulls and pigeons that wander by. But the park has been literally wrapped in caution tape for a month, and the ducks that normally stay in and around the pond have come out to the edges by the sidewalks — where people can still walk by and feed them.

On a related note: iNaturalist’s City Nature Challenge for 2020 is underway. You can join the project to photograph the wild animals, plants, fungi and other lifeforms you see around your home or neighborhood (depending on how far you can roam in your area) this weekend. I’ve already posted the ducks, as well as a finch, some phoebes, a blackbird, a wasp, and a bunch of random plants found in the yard. Well, weeds, anyway, but the whole point is to post (and later identify) the wildlife in the area.

(And yes, you can obscure the location info. When I’m at or near home, I mark a wide circle around a major intersection and choose the “obscured” option, which further hides it from anyone but project admins and curators.) 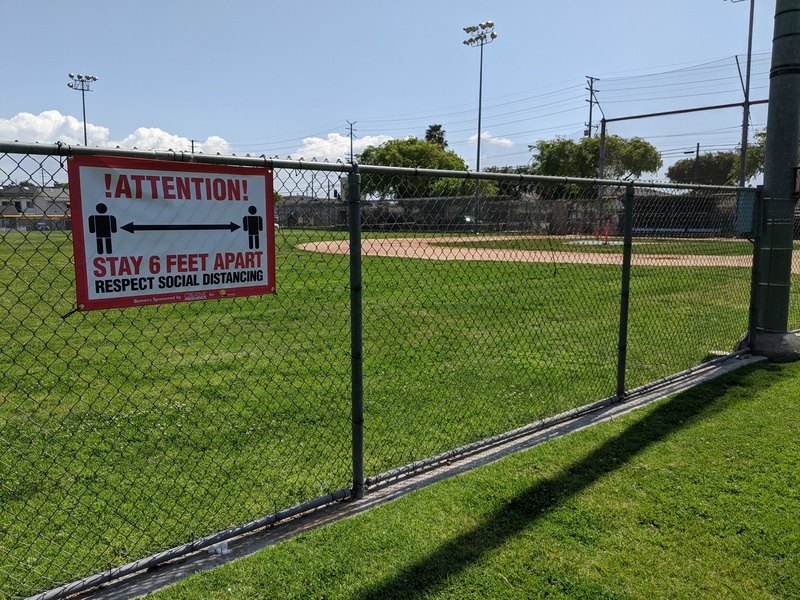 There’s a difference between “going out” to a destination or event, and “going outside” for fresh air or exercise. The first is more likely to land you in the kind of crowds that can help spread the pandemic. The second can usually be done while still keeping your distance from people. Depending on how easy that last part is, some regions have locked down “going outside” much further than others.

Here in the South Bay suburbs of Los Angeles, it’s a patchwork. Everyone’s closed the beaches and piers. Manhattan Beach has closed all its parks outright. Torrance and Redondo Beach have closed playgrounds, fitness equipment, and sports facilities, but have kept most city parks and fields open for now — with reminders everywhere to stay six feet apart and wash your hands.

Not that I would count on the bathrooms actually having soap.

And I certainly wasn’t going to check if I didn’t have to. I’ve been trying to avoid touching anything on these walks, even walk signal buttons if I can plan a route that bypasses them. 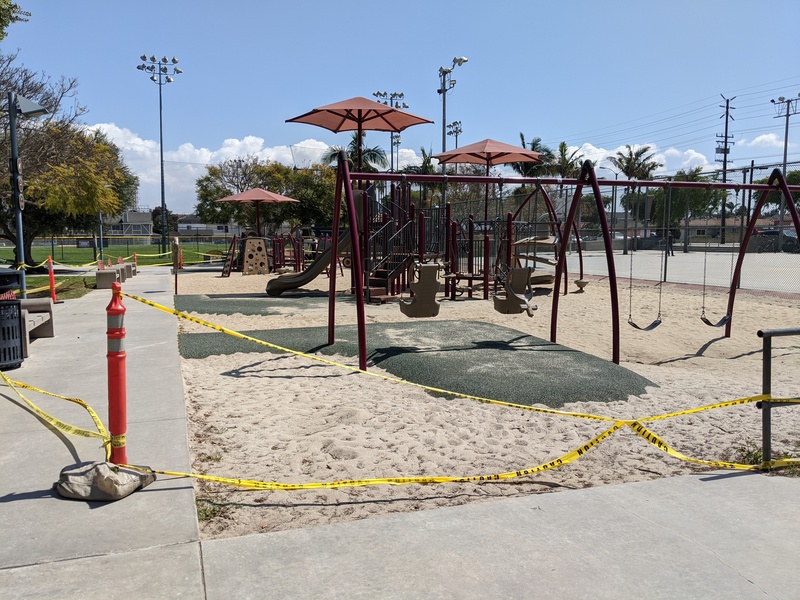 They wrapped caution tape around the playground. Just imagine one asymptomatic kid shedding viruses all over the playground equipment, while a bunch of other kids climb on that same equipment and forget they’re not supposed to touch their faces, then take that virus home and pass it along to everyone in their family. 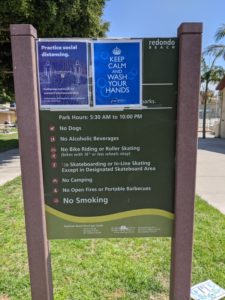 The park wasn’t totally deserted, though these photos certainly give that impression. There was a couple playing catch near one corner of the field, a family with kids doing batting practice over at another corner, an older man sitting on a bench while his dog explored the grass, a family with kids on bikes and scooters (at least one of the kids was wearing a face mask), and so on. People walking or biking past, either solo or in pairs. And me, pausing every minute or so to take pictures for iNaturalist, catch Pokémon, or fight Team Rocket.

But we were all keeping our distance from each other.

Even the kids on scooters. 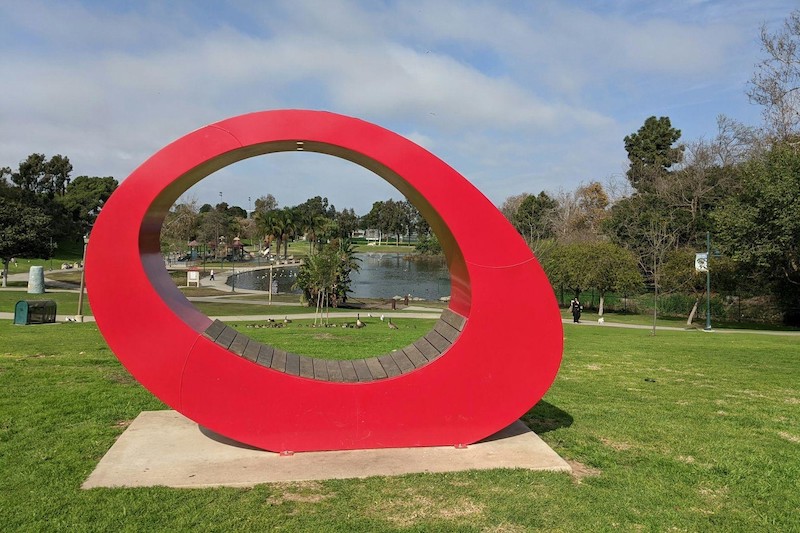 When did they install the Guardian of Forever at this park? 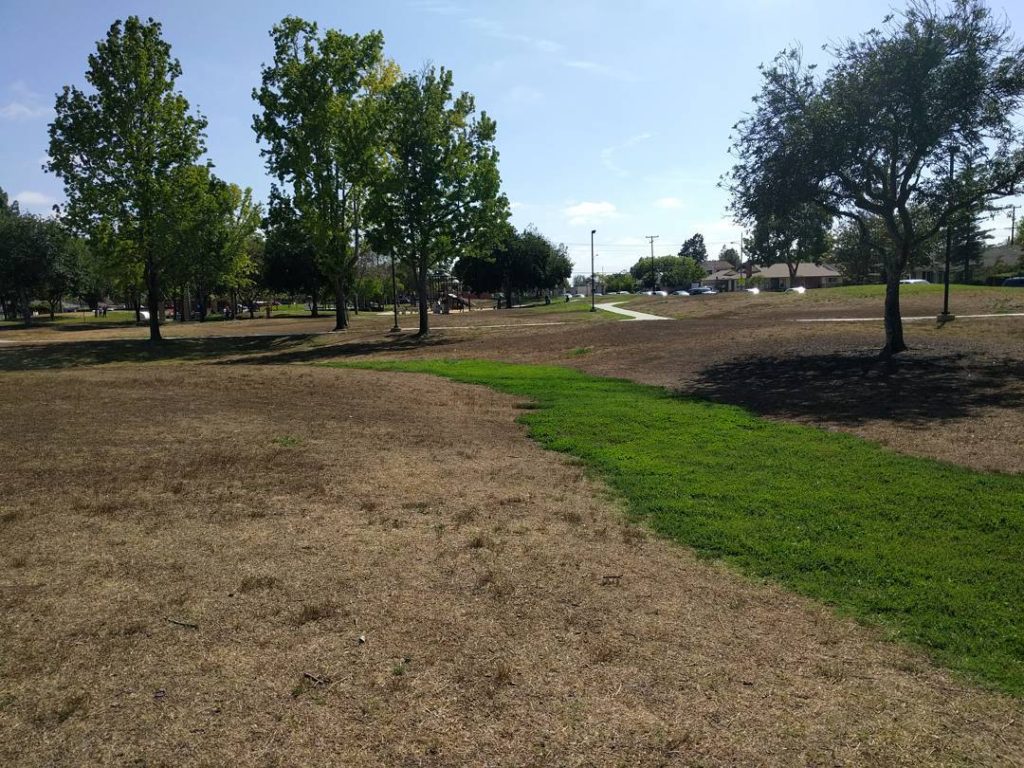 As near as I can tell they’ve stopped watering the grass in the back half of this park. The grass around the edges, near the playground, and near the clubhouse is green but scraggly. I’m not sure how they’re watering the trees, but most of them seem to be finding enough water to have put out leaves. Away from the street view, the ground is mostly dirt and dead grass now, but you can really see where the runoff collects.