The Santa Ana winds arrived in earnest overnight. We spent most of the day indoors, going about our usual business with the howling wind and occasional thump in the background. I’d glance up from my book (I’m about halfway through Regeneration, the conclusion of Julie Czerneda’s 3-part Species Imperative) and look out at the trees as the branches shifted, making the leaves shimmer.

We went out for a late lunch/early dinner, and noticed it smelled like smoke outside. There wasn’t any smoke visible, though. There were lots of trees bending as the wind gusted, including a conical juniper whose tip would bend over even further than the rest, then flip back, like a finger beckoning or a hand waving good-bye.

After dinner we ran a few errands. Around 6:00, we walked out of the S-Mart* in Tustin and saw a huge billowing cloud of smoke rising in the distance. All we could tell as we walked through the parking lot was that it was coming from the hills off toward Saddleback. I decided to go to the Best Buy parking lot, where I knew there was a much better view of the hills, and on the way, Katie managed to spot actual flames on the hillside. 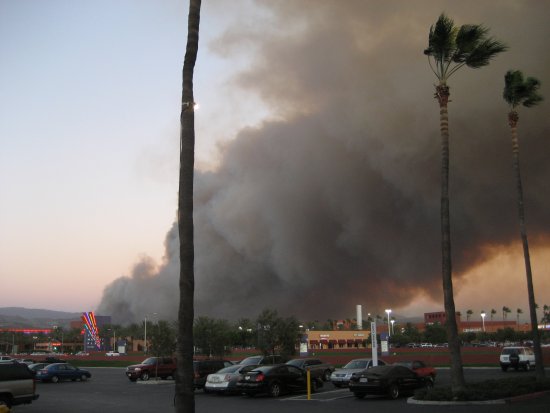 By the time we reached Best Buy, the smoke plume had grown, the flames looked like they’d crept down the hillside, and the buildings across the way blocked more than I remembered.

But there were over a dozen people standing out in the lot, looking at the smoke, and taking pictures. In fact, as I ran around looking for a better view of the hillside, I noticed that people were walking out of the store, stopping, and getting out their cameras. 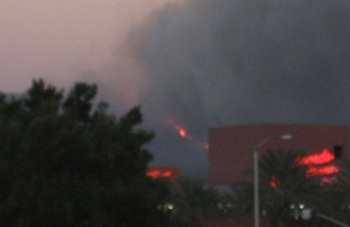 It was clear that we weren’t in imminent danger where we were, so we continued on with our errands. After sunset, we walked out of another store. While the smoke was invisible against the dark sky and the glare of the street lights, the moon was clearly visible—and deep red, not unlike during an eclipse (except with only a first-quarter moon). As the smoke shifted, the color changed to a lighter orange, then back to red. By the time we got home, we were clear of the smoke cloud and the moon looked normal.

Most news coverage seems to be focusing on the fire in Malibu, but the OC Register has an article on this one (link via Aeryncrichton). The location—near the 241/133 interchange and Portola Parkway—sounds like it’s near an area I drove through a few months ago, looking for random scenic views and finding the beginnings of new housing construction (and the “Ridge Valley” sign). That puts it disturbingly close to actual neighborhoods, though the fire authority site only indicates voluntary evacuations in that area.

When we got home, the sidewalk leading up to our apartment was blocked off. As we worked our way around the long way, we realized that the tree in front of our balcony had fallen over. Fortunately, away from the building and not into it. Just a few hours earlier, we’d been looking out at the courtyard and thinking it was a good thing all the table umbrellas were closed up, or someone on the other side would find one smashing through their window.

At this point, the smell of smoke has worked its way into our living room, but not anywhere else. Tomorrow morning’s gong to be interesting, that’s for sure. I’m just hoping it’ll be interesting on a normal Monday schedule.

*It used to be a K-Mart. Now it’s a “Sears Home Essentials”—as my brother once suggested, as opposed to “Sears Useless Crap You Don’t Need.”