On a clear day in early October, I went driving up into the Tustin Foothills to see what I could see. I took a bunch of photos at a turnout, and also stopped at an intersection that gave me a nice view of Peters Canyon, the hills behind it, and Saddleback in the background. I used this photo a few weeks later for my drought post.

After the Santiago Fire, I waited for another clear day (which took several weeks), and set out to do it again and see just how far north the fire had reached. I managed to get a great pair of before and after photos from the intersection of Foothill and Lemon Heights. 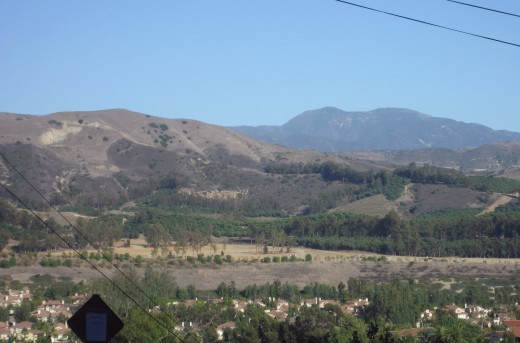 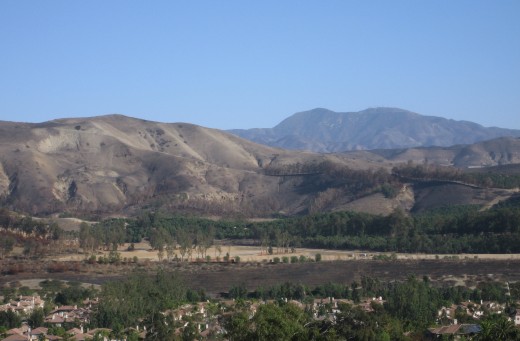 While the orchards seem to have been spared, you can see the field in the foreground looks scorched, and most of the trees making up firebreaks seem to have died. More dramatic are the hillsides. Before the fire, you can see expansive dark patches of scrub, wide expanses of lighter dried grass, and occasional dark green bushes. Now it’s all dirt, except for the blackened remnants of the bushes. There are several gullies whose sides were hidden and softened by the ground cover, but are now starkly visible. And after this week’s rain, they’re probably eroded even more.

A few notes: The air was somewhat clearer for the “after” photo, and it was earlier in the afternoon, so the angle of the sunlight helped pick out terrain features a bit better.

Things are starting to get back to normal, at least for those of us not directly affected by the Santiago Fire. There was a layer of haze coating the mountains Monday morning, but the air smelled normal, and the sky, when the clouds broke up, was blue.

My co-worker who stayed behind in Silverado came back to work today, and had all kinds of stories about everything from rescuing kittens from burning houses and repairing a radio repeater to holding off advancing flames with a length of PVC pipe (using it to break apart the brush ahead of it).

The air was clearer even than usual, affording a detailed view of the hills and Santa Ana Mountains. The clouds made patterns of light and dark on the landscape. The hills looked better in sunlight than in shadow, with the light brown (dirt?) dominating over the charred stubble. In the shade, the hillsides simply looked blackened.

The mountains, on the other hand, looked better in shadow. As silhouettes, they looked no different than on any hazy day (except for the one plume of smoke still rising). In sunlight, however, they looked gray (normally from this distance they look brown) from all the ashes. From what I read, there are places where every bit of vegetation for acres has burned. My co-worker said areas of the mountains looked like a moonscape. 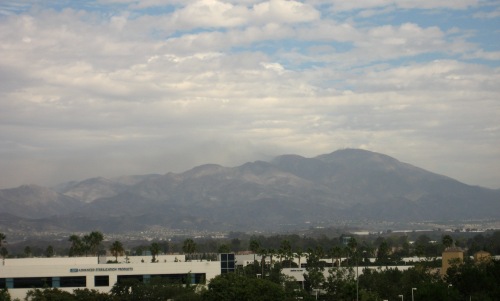 I actually saw, from a long distance, a helicopter (presumably) dropping red flame retardant on the mountains to create a fire line. 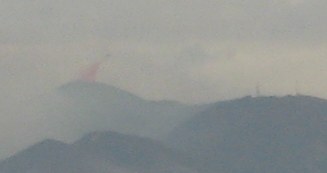 Late in the afternoon I actually spotted some faint Anti-crepuscular rays (think Thomas Kinkade, but in the direction opposite the sun) looking out the window. They were too faint to get a decent photo, though.

Sometime, maybe this weekend, I plan on driving out to see the landscape more closely. 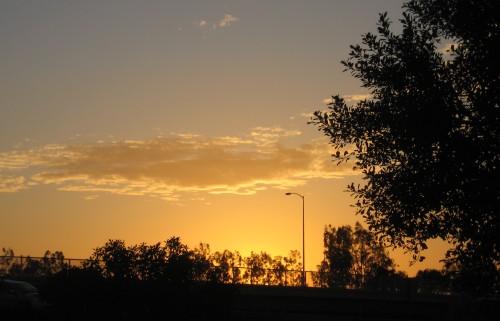 The change in the weather has brought in clouds today (Saturday), and even the occasional sprinkle of rain. It apparently helped slow the Santiago Fire considerably.

I went into work this morning to deal with some network problems (you may have noticed that this site was down for a while), then went over to the Spectrum to grab lunch and take a look at Leopard. (Incidentally, my plan seems to have failed: Amazon shipped the box yesterday, so I’ll have it in just a few days. And I’ll really want to put it on the PowerBook.) I went up to the top of the parking structure to take a look at what was visible. 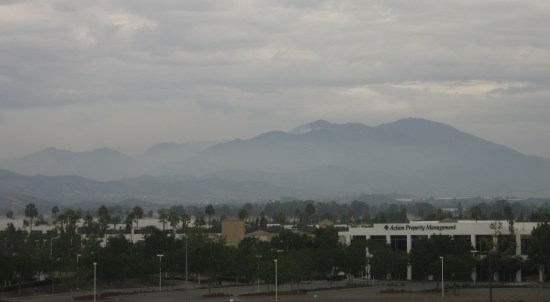 There’s considerably less smoke than yesterday, and you can see the beginnings of a layer of haze below the hills. The cloud of smoke peeking out from behind the lower peak just in front of Saddleback stayed there, without getting visibly larger or smaller.

The air’s been relatively clear, except for the fertilizer smell when I walked out of the office. People were out shopping and sitting at outdoor tables. I saw one woman walk by with a face mask, but everyone else seemed to be taking things as normally as possible.

The apartment complex cleaned out the pool, which a few days ago had intricate patterns of ash lining the bottom. 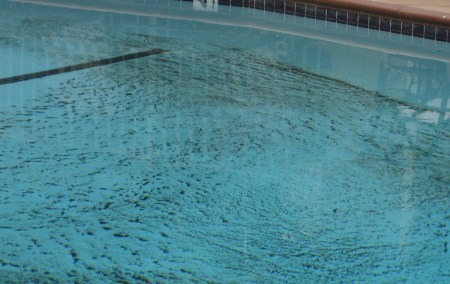 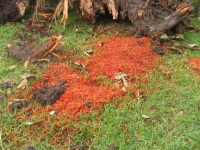 They also finally cleared away the remnants of the tree that collapsed on Sunday. They chopped it up into smaller pieces, and moved it off the sidewalk, but left the stacks of logs, branches, the stump and piles of sawdust sitting on the lawn for the rest of the week. After a day or so, the sawdust turned almost bright orange. My best guess is that they ran the sprinklers.

Of the two co-workers who live out in Silverado, one cleared out on Tuesday, while the other stayed to help out with, well whatever he could. Putting out spot fires, rescuing animals, scouting. His wife has been sending out email updates whenever he manages to contact her. I ran into the one who evacuated at the office today (he frequently comes in on weekends). At the time, the prognosis didn’t look good, but now it sounds like the canyon homes were spared for another day.

It still wasn’t encouraging when, walking to the Corner Bakery at the Tustin Marketplace tonight, Katie and I were again able to see a red glow in the mountains. We went looking for a spot where I could both steady the camera and see the glow, and finally set it up on one of those waist-height light poles lining the entryways to the parking lot.

The glow brightened and dimmed several times while we paused. 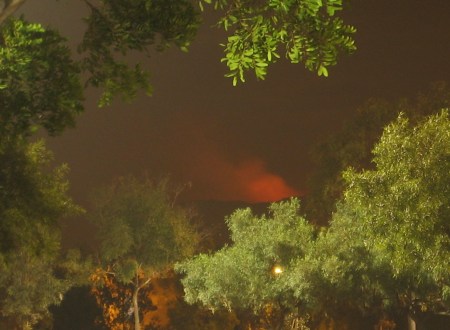 This is a 10-second exposure taken around 8:50 PM. You can see how well-lit the parking lot is by looking at the trees. I suspect the Marketplace is the primary reason we can’t see as many stars from home as I’d like.

Winds have shifted northward. The good news: my workplace is no longer drenched in smoke from the Santiago Fire. I can see blue sky and wispy clouds, terrain back to the nearby hills, and the twin peaks of Saddleback rising above the smoke. Reportedly the northern peak (the one without all the radio transmission towers) has burned, though it’s hard to tell at this distance. The bad news: it’s sending the flames straight at Silverado Canyon, which was spared earlier this week when the fire raced past it eastward. Once again, worried about the co-worker who stayed behind and spent the last few days rescuing animals and relaying information.

The Santiago Fire has moved up into the mountains, raging through the Cleveland National Forest. The canyons are still under evacuation, but out here in the Saddleback Valley, it just looks like a really smoggy day. With yellower-than normal sunlight. It was actually cold this morning, for the first time in well over a week.

Things were just clear enough at home last night that we opened the windows for about an hour to air the place out. Then the smell of smoke started drifting in again.

Because there hasn’t been much to see since Thursday, I haven’t been taking as many photos. So instead I’ll point you to a couple of nighttime photos I found on Wikipedia’s article on all the fires. The one on the left is a view from Aliso Viejo across the valley (the Washington Mutual building at the lower left is half a block from the comic store I frequent) by Wikipedia user Bighead. The one on the right is a view from Mission Viejo by Kevin Labianco. His other photos on Flickr are worth looking at as well.

The OCFA has posted a nice map showing the progression of the fire. Since they replace their maps every day or so, the thumbnail links to a local copy of the map. (via AerynCrichton)

I’ve noticed people starting to speculate on terrorism as a possible cause of the fires, because it’s awfully suspicious that they’d all break out at once. Well, no, actually: it isn’t suspicious at all. Southern California is a very dry region. It rains in the winter (well, usually), then dries out in the summer. By the end of summer, the grasslands and brush are basically tinder. Then the Santa Ana winds blow in, usually in October: high speed, high temperature, low humidity. They dry things out even further, spark power lines, and once a fire has started (by arson, accident, etc.), make it spread rapidly. To make matters worse, there’s that drought I mentioned last week.

So if conditions are ideal (so to speak) for fire in one place, they’re usually ideal all over the region. We get wildfires every year, often two or three at once. They don’t get the headlines when they’re out in the wilderness, only when they encroach on cities and homes. And sometimes, when conditions are really bad, we get massive fires across the region. It’s happening now, it happened in 2003 (with the Cedar Fire being the largest), it happened in 1993 (the nearby Laguna Beach fire being only one of several).

In short, California burns regularly. People can help that process along, but it happens. Could terrorists have started some of the fires? (So far, only the Santiago Fire has been identified as arson.) Possibly. But it’s hardly the most likely explanation.