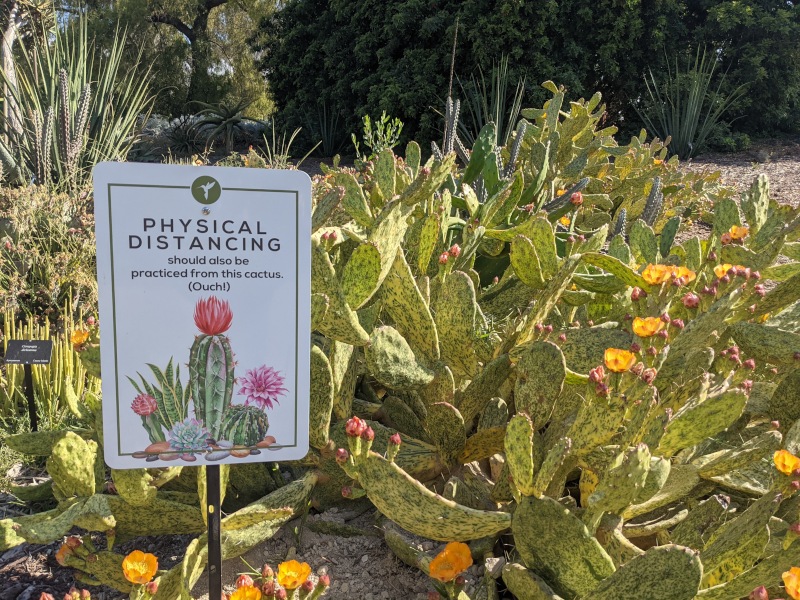 A few Covid-19 rules are still in place at this botanical garden, though it’s a lot more relaxed than it was last spring when they managed to stay open even through the early-pandemic lockdowns.

Finally made it out to the botanical gardens up in the hills for a hike. They’ve actually stayed open this whole time by requiring reservations to limit the number of people on the grounds at a time. (Also face masks, distancing, and closing off benches and some sections.)

Ironically there were more people there than I usually see. The limits must be against an increased demand due to the fact that they were actually open!

More photos on Photog.Social and from this and other visits on Flickr.

I’ve been seeing hawks lately when I’m out walking, which is new. I know partly it’s that I’m actively looking for suburban wildlife, but I’ve been doing that since last June when I started participating in iNaturalist. I started noticing how many squirrels and sparrows and phoebes and finches were around (in addition to the crows and pigeons and seagulls) right away. Maybe it’s seasonal? Maybe it’s the time of day I’ve been looking?

Whatever the reason, I’ve logged four observations over the last month or so. First, two red-shouldered hawks I spotted while hiking. 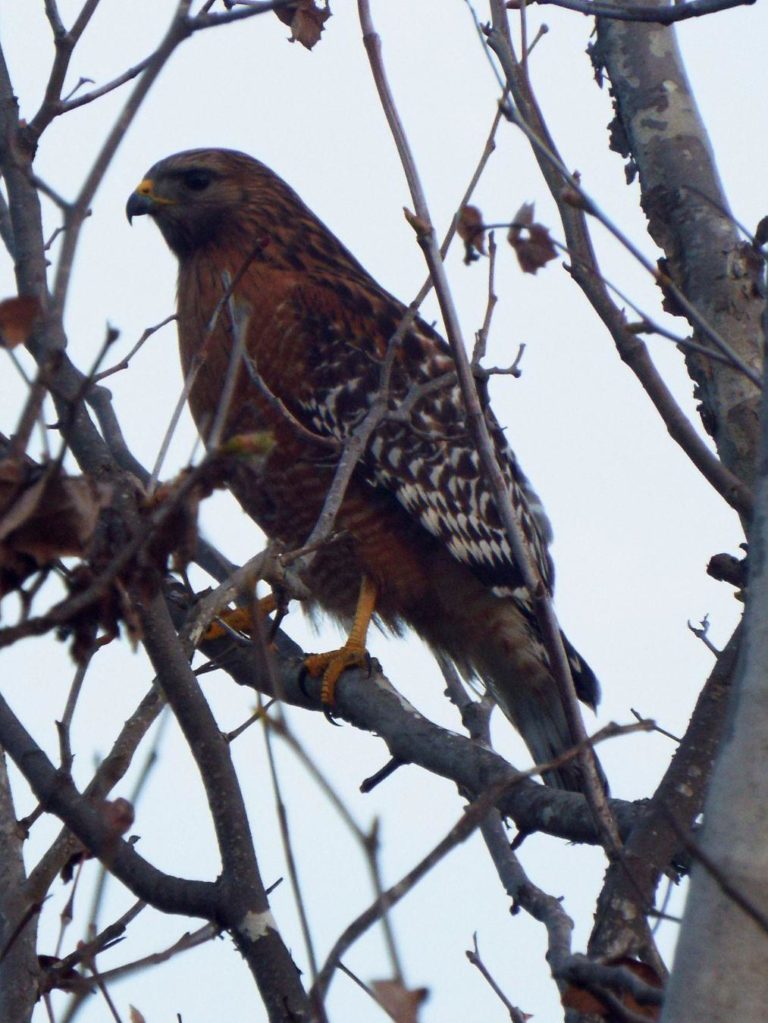 This is the best photo I managed to get of any of them, because it was perched in a relatively short tree at Madrona Marsh Preserve. Maybe only ten feet off the ground, just off the trail and not too far ahead of where I was standing. When I saw it, I stopped and took about five photos. It looked around, no doubt trying to spot some of the zillion tiny frogs I could hear (but not see), and then flew up to a higher tree, presumably for a better view. 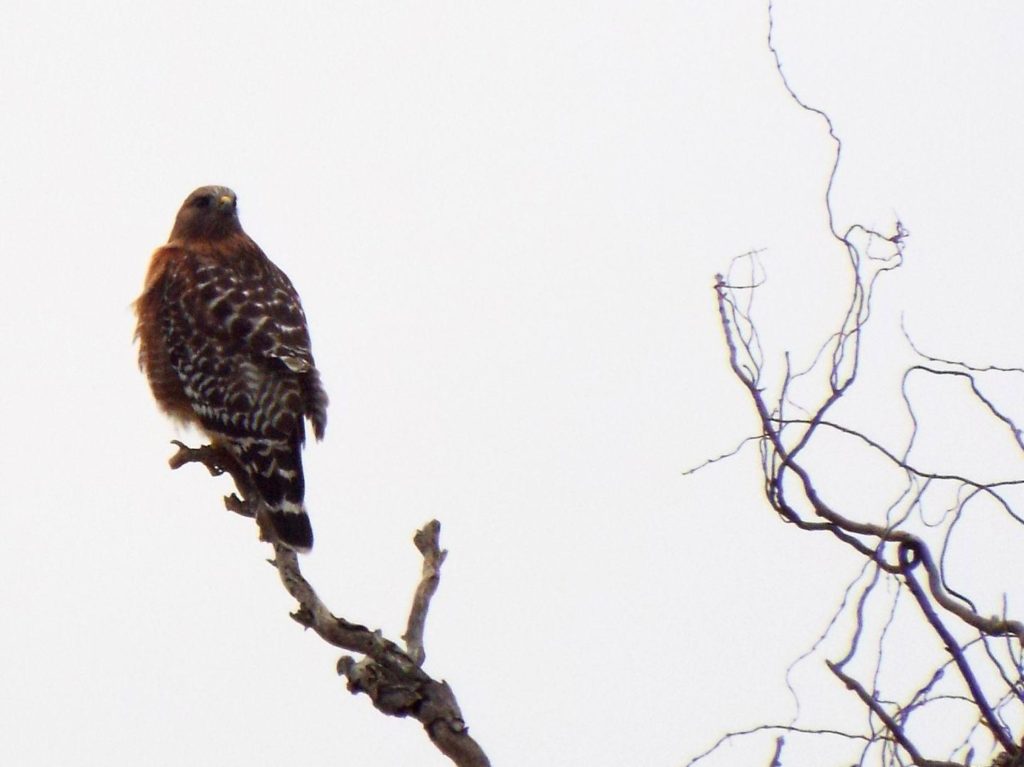 This one’s not as detailed, but I like the way it came out. I saw it from a few hundred feet away in a tall tree at the South Coast Botanic Garden. Yay for zoom lenses! (Though I still cropped the heck out of this shot.) It stayed there for a while, but I decided not to try to get a closer view and just continue hiking.

And then on two occasions I’ve spotted red-tailed hawks up in the same electrical transmission tower while walking along a bike path. In both cases I spotted them from a distance, perched up in the metal struts, not sure what kind of bird I was looking at until I could get closer. 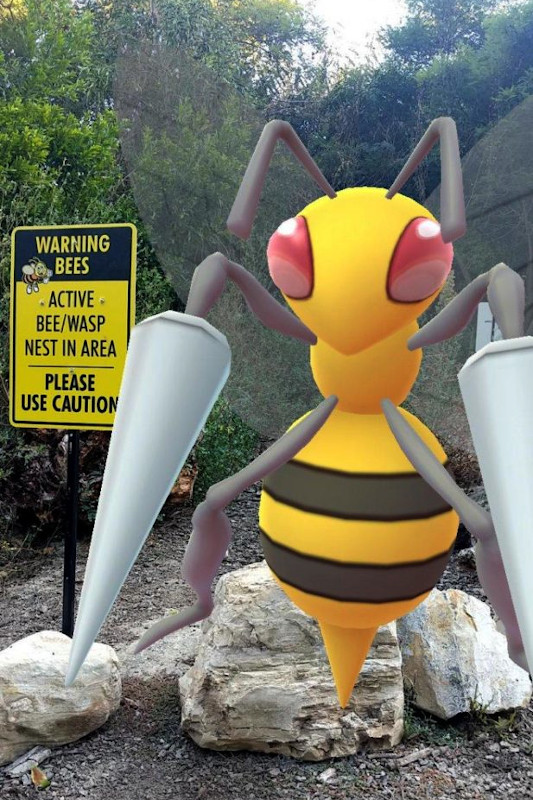 I’ve joked about how iNaturalist is like Pokemon Go for real animals. Well, since I started playing the game, I’ve been combining walks for both. And on yesterday’s hike in the local botanical gardens, I took some photos with a few Pokemon in their, um, natural habitats?

(Still not sure why I found so many Electabuzzes in the botanical gardens, though.)