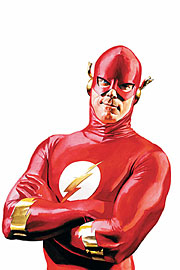 DC Comics released their July solicitations today, along with some of the books due in August. They managed to say absolutely nothing informative (or, to be honest, particularly interesting) about Flash #14—just that it’s going to be big. C’mon, show, don’t tell!

On the plus side, we now have a cover and a confirmed date for Flash: The Greatest Stories Ever Told: August 15. The table of contents hasn’t changed from the initial announcement, so it sounds like it’s final. At least for promotion, they’re using Alex Ross’ portrait of the Flash. 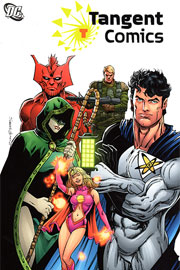 Oddly enough, the one thing on the list that actually got me excited was the first collection of Tangent Comics, due August 29. (Edit: I’ve updated the image at the left to the final cover. Originally, DC posted the cover from Tangent Comics: The Atom)

Tangent Comics was a fifth-week* event back in 1997 that built an entirely new fictional universe using only the names from DC’s stable of characters. The Atom became a nuclear-powered Superman type. Green Lantern became a mysterious figure whose lantern could bring souls back from the dead to complete unfinished business. The Flash was a human made of light. The event consisted of nine books, each designed as if it were the first issue of an ongoing series, and was successful enough that they followed it up with a second round in 1998. END_OF_DOCUMENT_TOKEN_TO_BE_REPLACED