So, a few years back (2004), Wizard World Los Angeles launched at the Long Beach Convention Center. People liked it. After a couple of years it moved to the Los Angeles Convention Center. Consensus is that it went downhill (I only saw it after the move, in 2007 and 2008), and in fact the 2009 convention was abruptly canceled just two months before its scheduled date.

Tonight I drove past a billboard and found out what’s going on this weekend at the LA Convention Center, where Wizard World would have been:

Given some of the opinions I’ve seen expressed about Wizard, I suspect there will be people wondering, “What’s the difference?” 😉 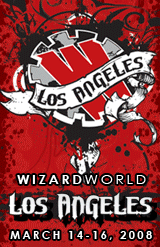 Wizard World Los Angeles turned out to be a surprisingly good con. Originally I was planning to go on my own, but when they announced the addition of Milo Ventimiglia (Peter Petrelli) to the Heroes panel, Katie decided to go as well. So we drove into LA Saturday morning, and arrived at the con around 11:00 AM. I was expecting a much sparser crowd based on my experience last year, but that had been a Sunday. This Saturday was a full-fledged con.

Update: The photo gallery is up! 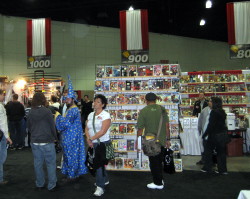 I spent most of the time on the main floor, hunting down back-issues, bargains and autographs. A lot of dealers had brought their bargain bins (some of them, thankfully, alphabetized!), and a lot of them had trades and hardcovers for half-off or close to it. There were also the booths selling high-grade Silver-Age and Golden-Age books, toys and collectibles, and at least two booths selling swords. Yes, swords.

At one point, I overheard two comic-book dealers discussing whether the show was worth it. One of them said that people here tended to be looking for bargains, so it was hard to sell anything else. They agreed San Diego was a better bet. 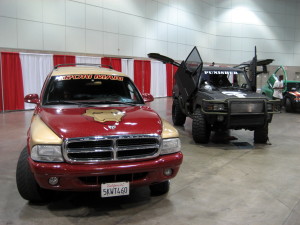 I’ve been joking that the logo design for this year’s con (see above) was inspired by the gigantic auto show that shared the convention center witl last year’s con. So I was surprised to find a mini-auto show here: Marvel-themed cars, including Iron Man and Punisher SUVs.

There was a stage set up for Guitar Hero. At one point, I noticed the music was Metallica’s “Enter Sandman.” It seemed appropriate. 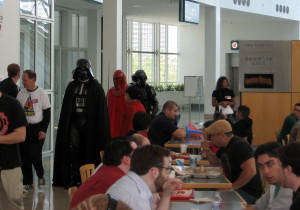 There weren’t quite as many people in costume as I saw at WonderCon last month (also a Saturday). But there was a large contingent of people in Jedi costumes, some of whom seemed to be sparring with lightsabers every time I walked down the right edge of the dealers’ room. And there were Imperial Stormtroopers directing traffic, making sure people could find the one large panel room that was half-way to the other end of the convention center.

END_OF_DOCUMENT_TOKEN_TO_BE_REPLACED

I went to Wizard World Los Angeles today. I almost went last year, and decided not to—and regretted it when I learned that Sunday (the day I almost went) was sparsely attended. So not only would I have had no problem getting in, but it should be a low-stress experience overall, rather than the insane crowds of San Diego.

The convention itself did turn out to be a nice, low-key experience, and I found some interesting stuff, but getting to the convention was a bit of an adventure. END_OF_DOCUMENT_TOKEN_TO_BE_REPLACED