So work decided to do Halloween on the 30th rather than the 31st because some people don’t work Fridays. This was a good thing, considering that we have not only a potluck but also a costume contest and a pumpkin-carving contest all on the same day and I have a finite amount of time after work. Last year, I was scrambling to make whatever it was I made and carve the Eye of Sauron into a pumpkin (costume was taken care of–Ren Faire outfit) on the night of the 30th, which was very not fun. This year, I baked the cookies on Monday and took Tuesday off for the usual Farscape night. Wednesday, after getting back from the pointless class I’m taking for work, we frosted the cookies while watching Angel and I carved my replica of the “Gourdzilla” face from Monday’s Grand Avenue strip and went out and tossed a mini-pumpkin on the ground to put in its mouth. Easy, simple, and I got sleep.

Here’s what I wore to work. 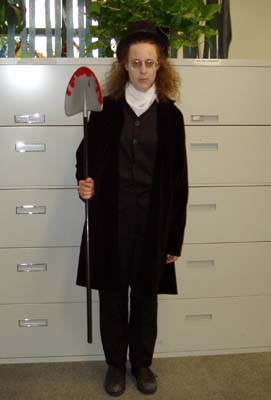 I wasn’t sure what I was going to do until the other people in my unit started talking about making a graveyard in the space between my desk and the cubes across the aisle and then doing makeup like dead people. I, being the genius I am, said something like, “Oh, and hey, I can be the undertaker.” So that’s what we did. The graveyard didn’t get made, but everybody dressed dead and someone played “Thriller” really loud. And I won the costume contest.

We are now in possession of four no-restrictions, no-expiration passes to Regal theaters, and $20 in gift certificates. So now everybody can go see Return of the King regardless of cashflow. Cool.

The best part of having two days of Halloween is that I had a chance to carve a second pumpkin. 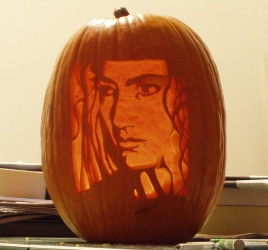 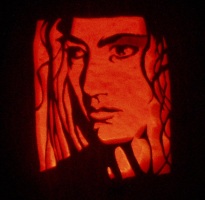 I’d been dying to try this since seeing that other Farscape images had been converted into jack-o-lanterns, and I’d been telling Kelson’s mom I’d give it to her. So it was good to have an extra night to get this done and remember exactly how much I love carving pumpkins. And tomorrow night, it’ll be good to get some frelling sleep…..