The weather has been… unusual the last few days, to say the least. Tuesday afternoon I could see smoke from at least two of the fires that had broken out. There was a huge cloud billowing up from the southern horizon, and another huge cloud creeping over the hills to the north. Both seemed to have died down overnight, but they were back by Wednesday afternoon: 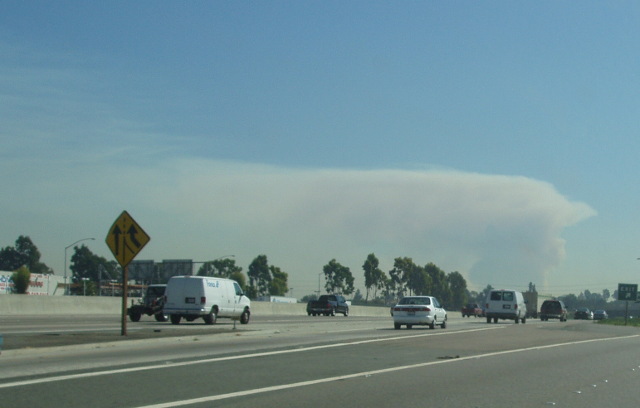 By Friday morning, there was enough smoke in the air to tinge the sunlight orange.

Then there was Saturday, which has to have been the most surreal experience I have had in a long time. Up to this point, there were plumes of smoke and large clouds covering parts of the sky. Now the entire sky was covered, keeping the day in permanent dusk, and when the sun could be seen it was bright red. Ashes fluttered to the ground. After several weeks of hot weather, it was cold. 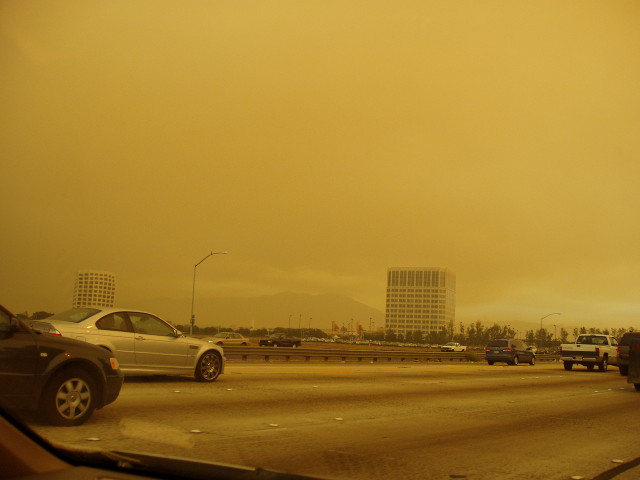 The last time I remember this much smoke was about 10 years ago, I was in high school, and the nearest fire was in Laguna Canyon. And we had an appointment yesterday to check out wedding locations… in Laguna Canyon. So with this nuclear-winter-like atmosphere, we spent the day driving in and out of the very area I most associated with large, nearby fires.

One location we were looking at was setting up for a reception later that evening, and ashes had been drifting onto the plates.

Overnight the Santa Ana winds we’d been hearing about all week finally made their way over the mountains, stirring things up and driving the smell of smoke into our apartment. This morning, ashes were piled up everywhere, even in the carport.

We went out to lunch today, and I learned quickly that staying indoors was the way to go for the rest of the day. Whereas yesterday was all thick smoke up above, today the smoke is thinner, but it’s all at ground level. The sun is visible, but yellow, and it’s like standing immediately downwind of a campfire and not being able to move.

Yesterday was eerie. Today’s scary. Based on news from the radio, it sounds like the fires have roughly doubled in size and destruction since this morning’s paper was printed.

We’re just hoping the flames will get under control… and that none will spring up any closer.