I stopped in a Starbucks after lunch last Wednesday. I confused the barista by ordering a frappucino—he said something about how I was going to freeze my kidneys or something, and when I remarked that I was going to be in the office, he said he was joking with everyone who ordered anything cold. (Local readers may recall that last week was not particularly warm by SoCal standards.)

I also noticed a stack of boxes by the wall, all of them like this: 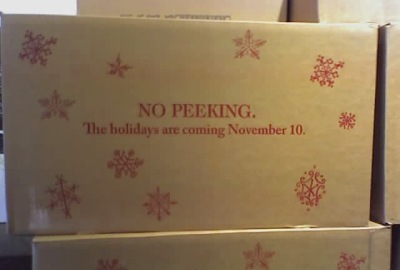 (For the record, this was November 9.) I assumed they were full of Starbucks’ Christmas and holiday-themed merchandise, but it was the phrasing that got me. The holidays start November 10? That’s kind of early, isn’t it?

I suppose it depends on which holidays we’re talking about. Usually, “The Holidays” refers to the Thanksgiving–Christmas period that also manages to encompass Hanukkah, Kwanzaa, and Boxing Day. (Wait, no one actually observes Boxing Day? Well, never mind, then.) They could be including Veterans’ Day, but there’s not much in the way of decorations, and the merchandising possibilities don’t tend to overlap much with coffee paraphernalia.

Hmm, here’s an odd thought. In America, we always associate snow with Christmas. Hence the snowflakes printed on the box. But in the southern hemisphere, December is the beginning of summer. I suspect Christmas songs like “Winter Wonderland” don’t get much play in Australia.