Monday morning dawned foggy. By the time we left for work, most of the fog had burned off, but we looked out the car window and saw a huge, billowing gray cloud hugging close to the ground. If this had been the usual fire season, or if there had been no fog to start with (or if there had been time for coffee to take effect), I think we would’ve both immediately recognized it as smoke from a brush fire. The Sierra fire in the Cleveland National Forest had started just a few hours earlier. 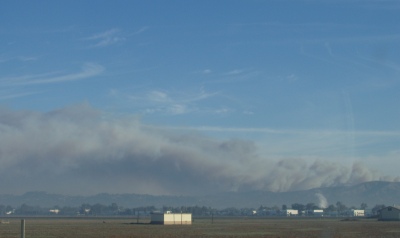 There was still fog around, though. One of the blimp hangars at the former MCAS Tustin was almost completely hidden by it: 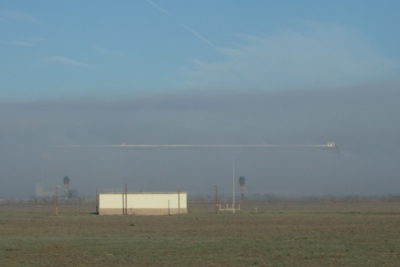 Last night, the silhouette of those hills was just barely discernible against a faint orange glow, barely visible with so many street lights and traffic lights around.

By Tuesday afternoon the air was still clear in Irvine, since the prevailing winds were blowing west, but the air smelled oddly like a campfire. The smoke plume rose out of the hills to the northeast, sending a band of smoke across the entire northern sky. 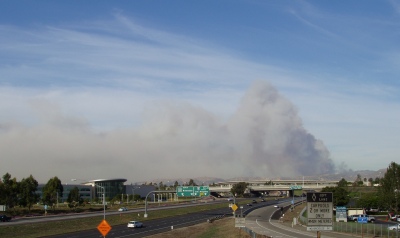 I went back out to the same bridge after work, and the plume looked very different. This time it rose up in place, then seemed to jet across the sky in a narrow band. The San Gabriel mountains were actually visible below the smoke. (You can just see them in this photo, a lighter silhouette above the silhouette of the nearer hills.) 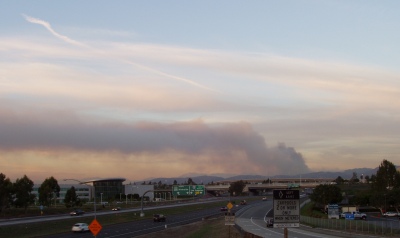 Looking the other direction showed a beautiful sunset, with bright orange around the sun and brightly-lit cirrus clouds against the blue sky. 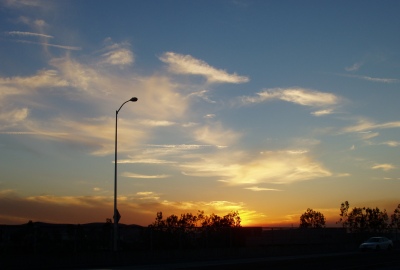 Incidentally, don’t miss the LA Times’ photos. Professional photographers have a lot more time to set up a perfect shot than some guy taking pictures on his lunch hour. The Times tends to delete stuff and/or lock it behind an archive fairly quickly, so their set may not be up for long.