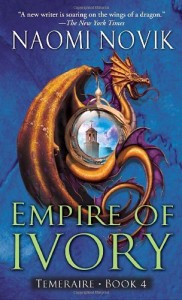 I just found out that Empire of Ivory, the fourth book in the Temeraire series by Naomi Novik, came out today!

The series takes place in an alternate version of the Napoleonic Wars in which dragons exist, and are used in warfare. This results in an odd mix of naval battles and aerial dogfighting, with full human crews carrying bombs, guns, etc. Dragons bond with the first human they see (not telepathically, like in the Pern books, just emotionally), so captains in the Aerial Corps are given quite a bit of leeway—though the entire Corps is considered rather unsavory by the general public.

It focuses on naval Captain Will Laurence, who captures a French vessel just as an egg is ready to hatch. The dragonlet Temeraire imprints on him, and he is whisked away from the sea and into the world of air warfare. (Think of it as Master and Commander with dragons instead of ships.) During the first 3 books they go through training together, travel to China to discover Temeraire’s heritage, and find themselves called back to Europe in the thick of the war.

Our friend andrea-wot lent us the first three books last year, and we both really enjoyed them. In fact, Naomi Novik has joined the short list of authors whose new books I’ll pick up sight unseen (currently sharing that spot with Neil Gaiman and Greg Keyes), though for some reason I thought this one was coming out in October. I’m definitely going to be stopping by Borders or Barnes & Noble tomorrow to pick this up. If you’re at all interested, I highly recommend picking up the first book, His Majesty’s Dragon (in the US; in the UK it’s just called Temeraire) and giving it a test flight.