First up is the fifth volume of the Scott Pilgrim series, Scott Pilgrim vs. the Universe, coming in just a few weeks. This series is just plain fun: mindless action with a video-game sensibility, something of a coming-of-age story, and a huge dose of absurdism. 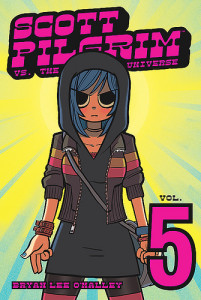 I’ve only read a fraction of Warren Ellis’ work, but I’ve subscribed to his “Bad Signal” email list for years, and he’s been talking about the ideas that became Ignition City for a long time. Basically, take all the old space hero archetypes (Flash Gordon, Buck Rogers, etc.) and look at what happens when the future passes them by. I think someone described it as Flash Gordon meets Deadwood. I tend to like Ellis best when he’s doing science fiction, so this is a must read. Coming in April. 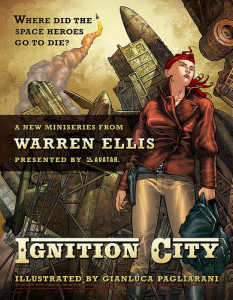 And finally: the relaunch of Peter David and J.K. Woodward’s Fallen Angel in July, with a crossover with Angel‘s Illyria.

There’s also Flash: Rebirth, which I’m looking forward to with a mix of excitement and dread. On one hand: Geoff Johns returns to the Flash and writes all of them, with Ethan Van Sciver on art. On the other: the more I learn about it, the more I get the feeling that the subtitle should be “Barry Allen is teh gratest Flash EVAR.” If that’s it, then no, thanks, I’m not interested. *sigh* 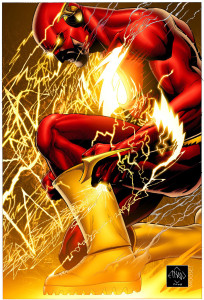 So, yeah, DC seems to be doing its best to push me away from anything they publish that doesn’t have “Vertigo” on the cover. I’m hearing rumors of a Welcome to Tranquility miniseries, but then that’s Wildstorm, so still not much DC-branded appeal. And the one Marvel series I read, The Twelve, is on hiatus (and it’s a mini anyway). Not going to be much coming out from the Big Two.

Of the TV shows returning for the spring season, I’d say Battlestar Galactica is the one that has me most intrigued. They’ve managed to throw new wrinkles into the Human/Cylon conflict and make viewers question basic assumptions about the show in the lead-up to the series conclusion. Next up is Lost, which has successfully moved past the Gilligan’s Island/Voyager problem of getting them off the island.

I’m also watching Heroes and Terminator: the Sarah Connor Chronicles, though neither of them has me champing at the bit for new episodes just yet. (Actually, I’m more interested in SCC than the new Terminator movie, which is kind of odd to realize.) What I’d really like to see is the last few episodes of Pushing Daisies. I’m still torn between bitterness at the show’s cancellation and knowing that at least it got to go out while it was still good, rather than after deteriorating.

As for future shows, the one that I’m most interested in seeing is Flash Forward, based on the novel by Robert J. Sawyer, in development for next fall. I’m also curious about Dollhouse, which starts in February, mostly because of Joss Whedon’s involvement. And I’ll certainly check out the BSG spinoff, Caprica.

Not a whole lot, actually. There’s Robert J. Sawyer’s new book, “Wake,” (part 1 of a trilogy) coming in April, but I haven’t decided whether to buy his stuff in hardcover or stick with paperback. And the final book of Robert Jordan’s Wheel of Time epic, A Memory of Light (being finished by Brandon Sanderson) may be coming out by the end of the year, or it may not.

Other than that…I haven’t heard anything about Greg Keyes’ plans now that Kingdoms of Thorn and Bone is done. I don’t think Neil Gaiman’s got any new novels planned for this year, though I’ve only caught about half of his blog posts over the past few months. Naomi Novik might have a new Temeraire book by the end of the year, maybe.

Tori Amos, Vertical Horizon, and Butterfly Boucher all have albums coming out, though I haven’t heard anything beyond “spring/summer 2009” on any of them. Tori Amos has basically never slowed down, except for a break between record companies, and it’s only been a year and a half since her last album, American Doll Posse (which was very good). Vertical Horizon has been out of the picture for a few years, though their stuff still gets played. (I heard “When You Cry” at the mall yesterday when I went to lunch.)

You’ve probably never heard of Butterfly Boucher, but Katie and I caught one of her songs on Indie 103.1 when it first launched. Then she opened for two different concert tours that we saw over the next year (IIRC, Barenaked Ladies and…Sarah McLachlan?), and we picked up her debut album, Flutterby. She’s been playing a lot of music, but this will be her second album. (A few weeks ago she posted a note about how she was finally free of her record contract, which meant she could finally release the album she finished two years ago.)