While driving to work this morning, I looked off to the left and saw this beautiful view of fluffy white clouds hugging the mountains, and bright sunlight on the patchy green hills.* When I got into work, I went straight for the corner conference room that has a view in that direction… but the clouds had rolled in and turned everything gray. I kept checking back every so often, but the closest I got was this:

It’s been great to have a more normal amount of rain this year. The coastal hills all turned green after the second rainstorm, early in December. The hills up by the mountains took longer, since most of the area had burned off in the Santiago fire. Faint patches of green started to appear around Christmas, and now, the lower hills at least are more green than brown.

The scenery still looks odd, though. There’s a third peak (Flores?) near Saddleback, about 1,000 feet lower, that normally blends in with the mountain behind it. Well, the entire north face of the hillside burned. Then high winds blew the ashes away. People coated it with a green-gray material that I suspect was intended to prevent mudslides (it looked like the stuff they spray on dirt embankments in construction projects before the landscaping kicks in). It rained, repeatedly. Then we had high winds again, clearing all the gunk out of the air…and now it’s got the light brown color normally seen on the lower, closer hills during the dry season, instead of the darker brown of the mountains. It doesn’t blend at all, even from as far away as Tustin. 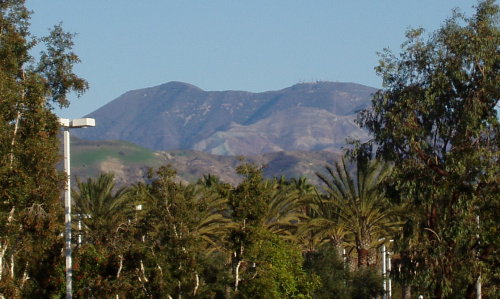 This was taken from in front of the Ralphs on Jamboree on January 13. You can see the line of hills in front is still a green/brown mix, and then there’s this light brown lump rising up behind them. On the left side you can see some remnants of the anti-erosion substance.

The following day, on my way to lunch at the Irvine Spectrum (7 miles away, and perhaps a 30-degree difference in angle), I went over a bridge and saw Saddleback next to the Ferris wheel. I knew I had to get that shot.

I parked in the west parking structure, then went running around the top floor looking for a spot where I could frame the wheel and the mountains together, and avoid too many light poles, and get above the few cars, and not have to worry that losing my balance would cause me to fall 3 stories to my death. I finally climbed onto one of the support pillars for the light poles in the middle of the deck, where if I fell I’d only fall a few feet.

Here, you can really see the difference between the areas that burned and those that didn’t. Compare this to the third picture in Saddleback Snow, or the second in Ashen Mountains.

Sadly, the best places to take photos from seem to be the middles of freeway bridges and tops of private buildings — in other words, inaccessible.