Several months ago I was browsing the local Blockbuster video store for a movie to rent, and I stumbled across one that made me laugh out loud. It’s the title on the right, and you’ll see why if you compare it to the rather more well-known title on the left. 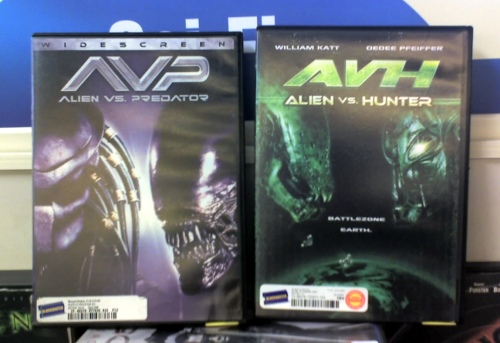 I mean, seriously, look how carefully they tried to match the source material.

I have to admit I haven’t watched either of them, so I have no idea whether this attention to detail pervades the actual movie. But I can seriously imagine someone not paying close attention picking up the wrong movie by mistake.

On the same trip, I found another video called Transmorphers — by the same production company, it turns out (big surprise) — but they didn’t try nearly as hard to match the packaging to anything Transformers-related. Still, for a good laugh, look through the titles of movies by The Asylum — I think Snakes on a Train may actually trump both titles.

4 thoughts on “Best Ripoff Title Ever”