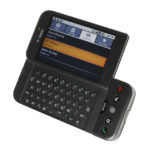 Android Community reports that ShopSavvy will soon be getting real-time inventory data from local stores. This will be very nice, as I’ve run into the occasional issue where things didn’t quite line up.

ShopSavvy is an app for Android phones that uses the camera to scan product barcodes, then looks up pricing from local and online stores. You can also do a text search if you don’t have a package handy.

Two failures I can think of were:

Outdated Sale Price. I wanted to pick up the Pushing Daisies DVD set. ShopSavvy told me that Circuit City (this was before the liquidation) had it for something like $18. I got there and they wanted something closer to $30. I forget whether it was a sale price that had just ended or whether it was only some locations that had the cheaper price.

Web/In-Store Discrepancies. After dithering for a year, I finally decided to get a new printer this weekend. (Okay, the old one stopped working.) I found a decent price/feature combo on TigerDirect, then found a much better price for the same printer on Amazon, but I didn’t want to wait two weeks for delivery or spend an extra $20+ for faster shipping. So I looked it up on ShopSavvy, which told me that MicroCenter and Costco both had it for just eight dollars more than Amazon.

I looked up the printer on MicroCenter’s website, which claimed it was in stock at the local store. But it also claimed it was refurbished. I went to the store, found the display model on the shelf, saw the price I expected (with an “As advertised!” note), and no mention of it being a price for a refurbished model. Then it turned out that they didn’t have any in stock.

So I hit Costco. As near as I can tell, they only sell the printer through their website, but ShopSavvy listed it under local. As long as I was there I looked at the printers they did have, but nothing matched the specs I was looking for. (Small mono laserjet with built-in network, preferably wifi, for less than $150.) Finally I just ordered it through Amazon, who in a fit of amazingness shipped it immediately, and say it should arrive tomorrow.

In this case it would probably still have failed with MicroCenter, since their website had the wrong info (or else someone bought the last one in the time it took me to drive there), but I would at least have known there was no point in looking at Costco.