I have to confess: I’ve started seriously thinking about a netbook.

Not that I actually need a netbook. I’d only really end up using it for conventions that I’d want to post live (which would probably boil down to Comic-Con International), and I have the ability to do that using either my G1 or the laptop.

Long-time readers (all five of you 🙂 ) may remember that last year I agonized over upgrading my phone to something with real web capability until they announced wifi, and I just lugged the laptop around. Which worked fine, but it was heavy, especially the day I was also carrying around Comic Book Tattoo.

The camera issue shouldn’t bother me. Chances are I’d just end up doing what I did for WonderCon this year: post the occasional phone pic to Twitter and then upload the good photos to Flickr each evening. Just like I’d mostly be writing brief posts from the convention and detailed posts at the hotel. 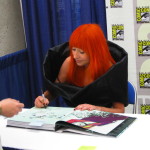 But then I remember the post I made on the Tori Amos signing last year. After the signing I was so hyped that I found a table, set up the laptop, banged out a blog post, hooked up the camera and added a couple of photos…and the post ended up getting linked on a major Tori fansite, producing a traffic spike so big that not only is the following day still this blog’s busiest day ever, but that post, even though traffic fell off over time, is the 8th most-viewed post on the site over the past year.

Still, the promise of another 15 minutes of blogfame isn’t enough to justify several hundred bucks. (Though the < $200 models that pop up on Woot from time to time have been tempting.) So I’m making an effort to practice typing with the G1, both the physical and on-screen keyboards. I’ve got Twidroid and I Tweet for posting to two Twitter accounts. I’ve got wpToGo to simplify blogging. I’ve got a plugin that will automatically liveblog using Twitter, which I still need to test.

It’s just a matter of making full use of the tools I have, rather than running after the latest cool toy.

Update: I posted this last night, but somehow it ended up backdated to the day I started it on May 20. I think wpToGo must have set a publishing date when I posted the draft. Yes, I started this post on my phone.