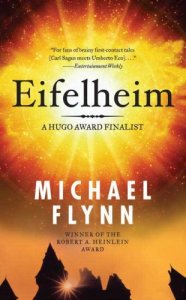 The present-day story is interesting, but hard to follow just because the viewpoint characters are very…self-absorbed.

Fortunately, most of the book focuses on the middle ages and the story of how a tiny German village encounters and eventually learns to live with the stranded aliens. It paints a detailed picture of life in the 1300s and how their strange visitors disrupt it, and it’s fascinating to look at how someone highly-educated in science and philosophy, but with a medieval European mindset, might see concepts like space travel, electricity, or even evolution. How do you explain coming from another planet in another star system to someone who believes that the Sun moves around the Earth, the stars are all the same distance away, and the “world” encompasses all of the above?

Archived at my reviews collection.

As the book caught up to the arrival of the plague in the village, I found myself curious about the timeline of the pandemic. In looking it up, I found an article proposing that, based on descriptions of the symptoms and spread of the disease, it might have been a viral hemorrhagic fever like Ebola or Marburg (with a longer incubation period), and not the bubonic plague. It probably falls under the category of “extraordinary claims,” but it’s certainly an interesting idea!