Lately whenever I take my car in for maintenance, I end up taking the car-free morning away from home as an excuse to walk down to the Manhattan Beach Pier. The last time was right after a Halloween storm, which was gorgeous, but this time it was a gloomy morning, and I took the opportunity to explore a little more.

Believe it or not, this next photo is not a double exposure: 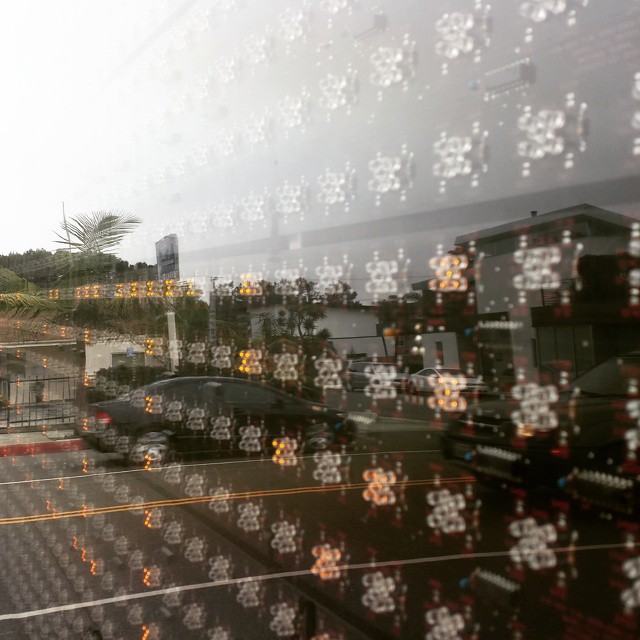 I don’t think I’d ever seen this type of traffic sign up close before. At first I was intrigued by the five-LED pattern used for each pixel, but as I started to line up a photo, I noticed the layered effect reflecting the street and the buildings on the far side. 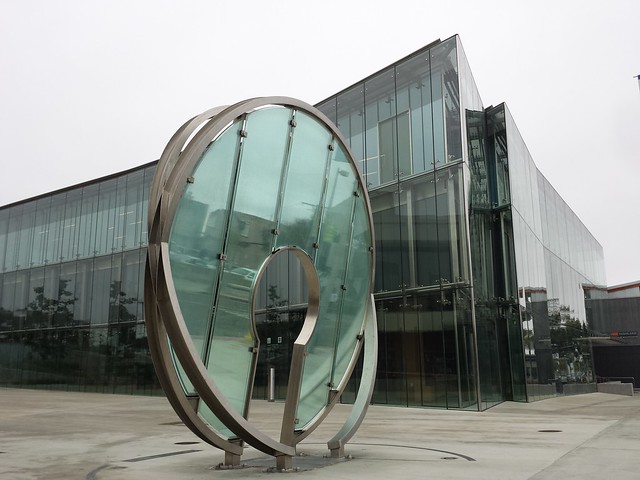 Now this was really cool. It’s the new city library, and in front of it a glass and metal sculpture called the Light Gate, by Mags Harries and Lajos Héder. I’m going to have to check it out again on a sunny day, and a late afternoon, and especially a sunset… 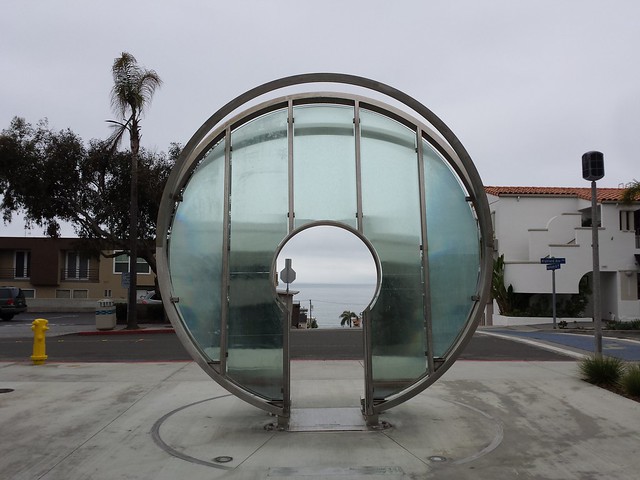 Because it faces directly west toward the ocean! There’s even an inscription indicating the days on which it lines up with sunset: January 27 and November 14.

From there I wandered down toward the pier to see how things looked in the gloom. Maybe there was mist? No such luck. But I did see something new.

I tend to think of houses in beach towns — and these beach towns especially — as tiny. Narrow lots, built back and upward. But I walked through the hills this time and saw some pretty big homes, and then saw this thing right above the beach: 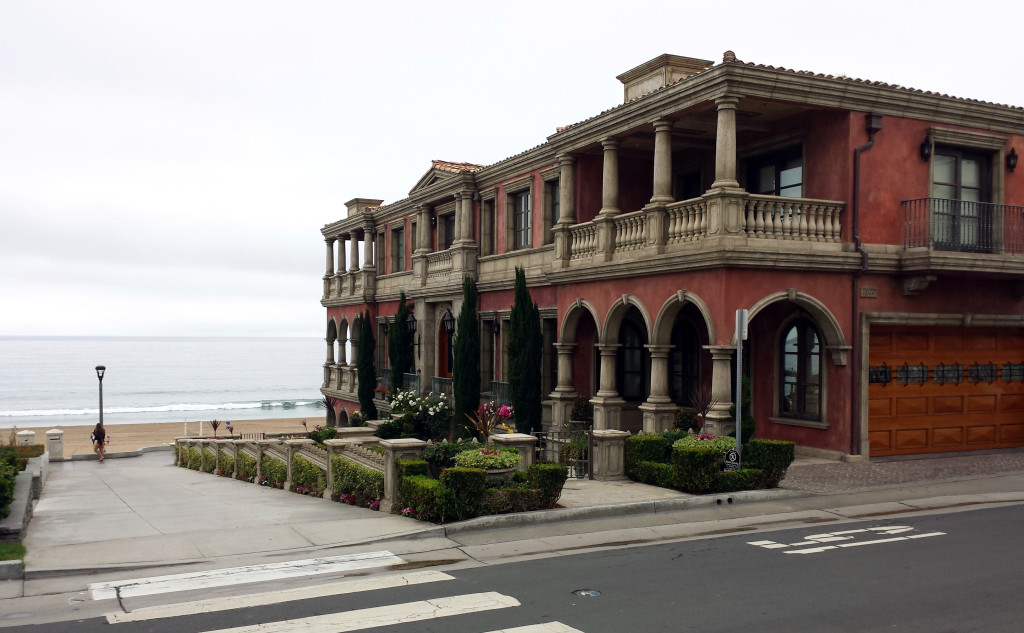 How the hell did I not notice that the last time I walked down that street? Maybe the sunlight drew my attention somewhere else. Or I was distracted by trying to figure out whether the clouds were going to start raining again.

Whatever the reason, it just popped out and demanded to be seen today.

Talk about a beach house!

Anyway, I walked down to the pier from here, and watched the waves for a bit, then headed back up to grab a late breakfast as Uncle Bill’s Pancake House, across the street from the library.

I had an errand I wanted to take care of up at the mall, which was apparently only a mile and a half away along the footpath that takes a curving path through the town.

Veteran’s Parkway runs through Hermosa Beach and Manhattan Beach, flanked on either side by a pair of narrow streets. Parts are lined with trees, parts with iceplant. In some places it’s at street level. In other places it’s built up above the street level. In some it’s below. In a few places, it’s on the hillside between the lower street on one side and the higher street on the other.

Sure enough, I found a plaque indicating that it used to be an old railroad route. Better yet, The Beach Reporter posted a history of the greenbelt with current and past photos just a few days ago! 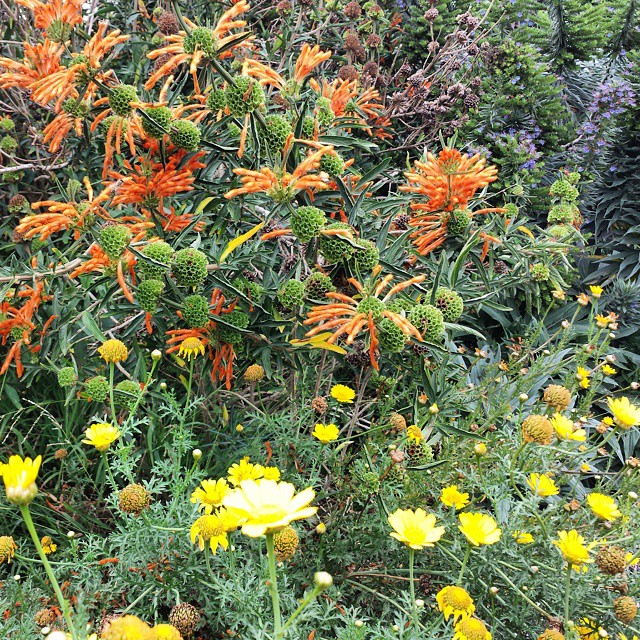 I also found a lot more native California plants as I walked further northward. Next to these flowers was a small sign asking people to stay on the path because native wildflower seeds had been scattered in the area. 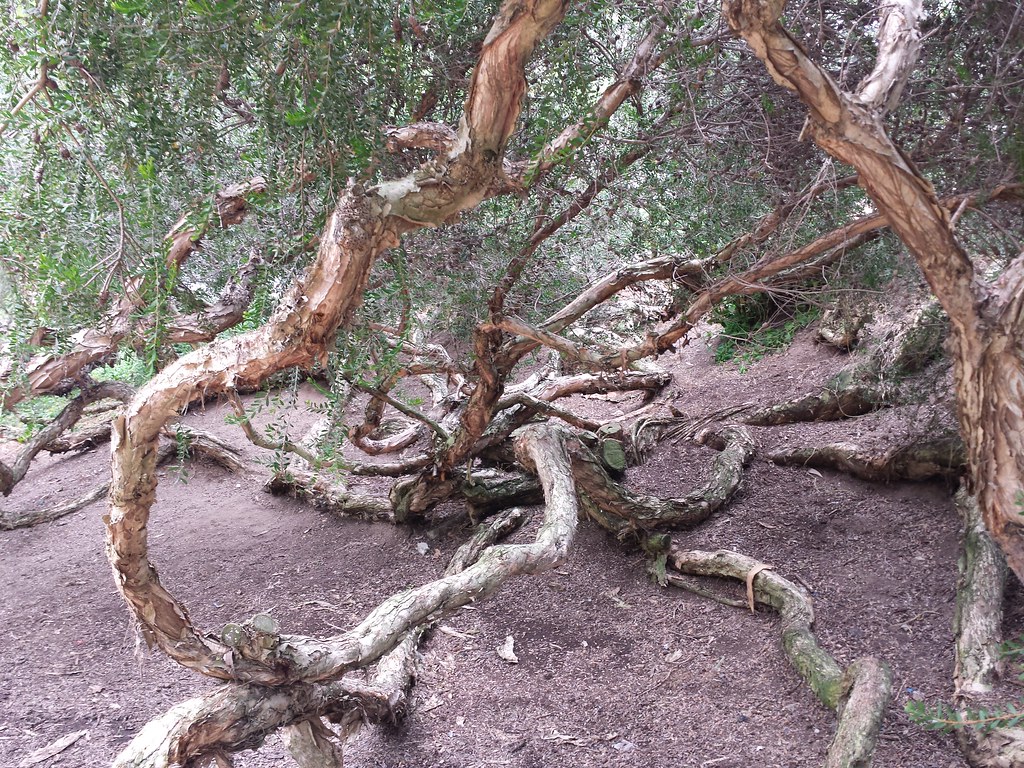 I finally confirmed something I’d suspected for a while: As the path approaches Pacific Coast Highway, it diverges from the street and passes underneath a bridge at PCH, connecting to the overflow parking lot for Fry’s. 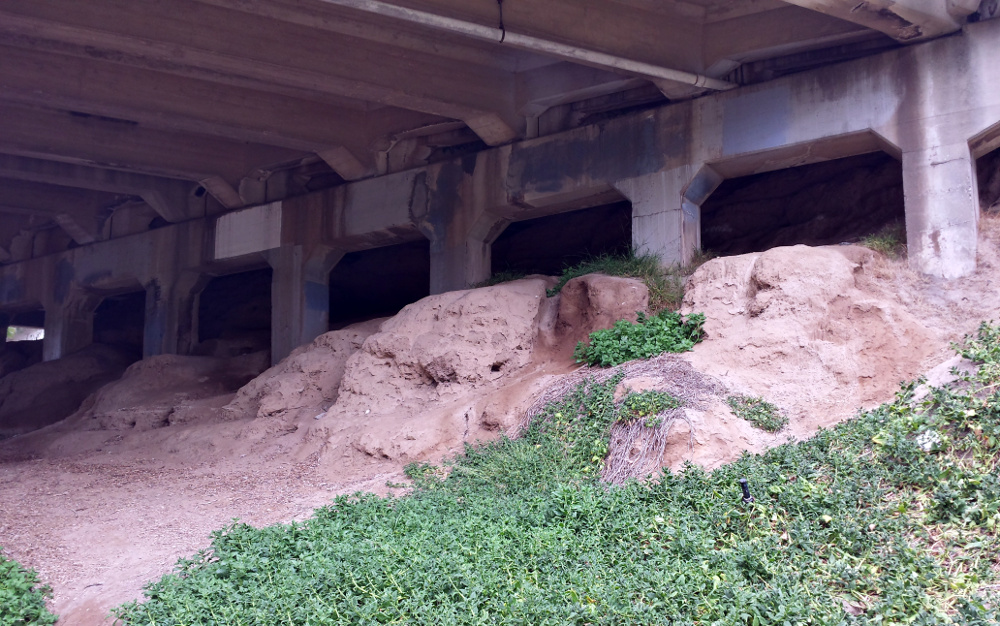 I’m not sure how stable that looks under the bridge!

I walked out into the parking lot, where I saw a few cars and (how shall I put this) evidence that people might bring horses down to the path from time to time. From there I walked up the stairs, past the outlying building where Doma Kitchen is building their new location, and on toward the mall.

At this point, I figure I’d walked about 2 1/2 – 3 miles. That’s a lot more more than I typically walk in a day, but aside from some hotspots on my feet and a little more sweat than I’d prefer, I felt fine.

Going off the Rails

The original plan was to take care of my errand, then complete the loop with a half-mile walk to pick up the car. Unfortunately I got a call that it wouldn’t be ready until late afternoon. What I should have done was walk back to the dealer and take the shuttle home. Instead I tried to catch a bus.

That might have been OK if I’d been willing to pick one up nearby, but I didn’t want to bother with transfers, so I walked another 15-20 minutes to catch another line, only to miss it by two minutes and find the next one was an hour and 15 minutes away. According to Google Maps I could walk the distance in just over an hour. And I felt just fine after walking all morning, right?

My path took me past the Northrup Grumman campus, which I recently learned was used for exterior shots in the classic Star Trek episode, Operation — Annihilate! when it was TRW.

A still from Memory Alpha: 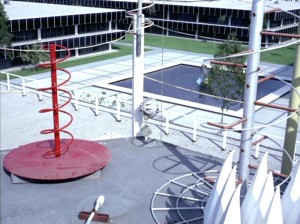 I thought I’d pick up a bus at the Redondo Beach Metro Station, which looks pretty cool…

…if a bit like an early iMac. Considering the Green Line was built in the 1990s, that makes sense, actually.

And I happened to be there just as a freight train came by on the parallel set of tracks at ground level. 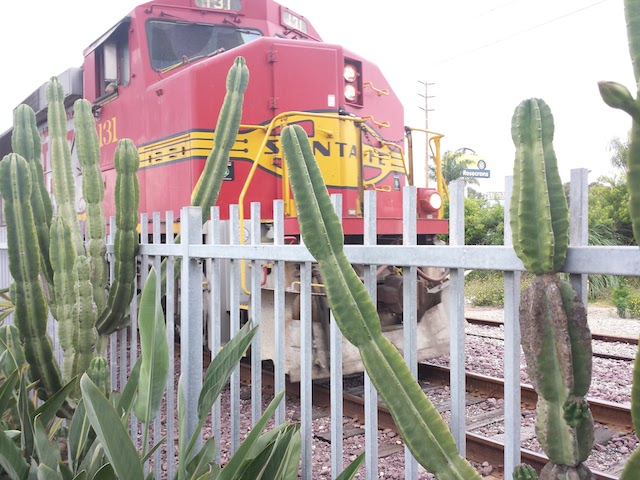 Santa Fe, of course — the old rail line I’d been walking along earlier was part of the Atchison, Topeka and Santa Fe (which put the song in my head for a good chunk of the walk).

No such luck on bus schedules, and again rather than sit around and wait, I kept walking through residential neighborhoods….later in the day…as the gloom burned off and I walked inland away from the cool coastal climate. By the end I’d walked a total of seven and a half miles over the course of the morning and early afternoon, and I was staggering. Not as badly as I was by the end of last year’s Allergy Walk at Long Beach (which was actually a lot shorter, but a warmer day on a route with no shade), but I was pretty tired.

But I got stuff done, saw some really cool sights I wouldn’t normally have seen, and got to stop and look at some things that I normally zoom past.

Plus now I have a good sense of my current limits for long walks.

At least where scenery and pancakes are concerned.

3 thoughts on “Glass, Steel, Rails and Wildflowers: A Walk in Manhattan Beach”