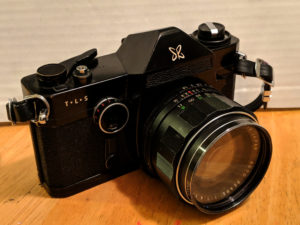 The 7YO was looking through the closet the other day and found my old camera bag. Inside it: the old film SLR camera that my grandfather gave me when I was around 12. It’s older than I am, a Sears camera that appears to be a rebranded Ricoh Singlex TLS from 1967. It’s completely manual except for the light meter.

And I expect it will work perfectly once I put some film in it.

As a teen I used it take photos of family, landscapes, spaceship models, stars, photo essays, monuments, even a space shuttle landing. He showed me how to develop film and slides, and make prints in his home darkroom.

It was my main camera for several years, until I got tired of carrying it around and went back to using a point-and-shoot camera. But I still miss having such effortless control over the focus, exposure and aperture. I keep telling myself I’ll eventually get a DSLR and recapture that.

Anyway, I showed him how to handle it, how to focus and set the F-stop and shutter speed, how to open it, load (imaginary) film, remove the lens, and see the iris as he opened and closed the aperture. We set it for a long exposure so he could watch the shutter open and close. He also found the tripod I’d given up looking for a while back, and once he was done inspecting this one, he hooked it up to a newer camera.

The problem is, he really wanted to try out the camera, but we don’t have any film. I don’t think I’ve bought film in almost 15 years, since I bought my first digital camera. You could buy film in any grocery store when I was younger, but it’s been relegated to specialty shops and online stores over the past decade. I figured I could find it online easily enough. But whose film is worth getting these days? And where to get it developed?

Some of the more serious photographers on Photog.Social (a Mastodon instance focused on photography) shoot film, so I asked for suggestions there. I’m going to have to explore Film Photography Project,, which looks fascinating!

Film was easy to find, but then there was the battery for the light meter. You can’t get the same kind of battery anymore. It turns out that old cameras like this one used mercury batteries because they produce a very consistent voltage instead of starting high and trending downward over their lifetime. But, you know, mercury. Not something you want seeping into groundwater from trash. They haven’t sold them in the US since 1996.

I could use the camera without a light meter. I’d just have to figure out the exposure on my own!

As it turns out, Zinc-air batteries have a similar discharge curve (but a much shorter life), and there’s a size that’s designed as a replacement for this one. OK, there’s that problem solved.

So, film and battery have been ordered, and are in the mail!

This should be interesting…