I had an interesting thought looking at the Blog Action Day, um, blog, which remarked on what, for me, was Sunday:

And so we come to it at last… Blog Action Day has now officially begun for the first countries closest to the International Dateline.

I realized that it wasn’t going to stop after 24 hours the way that, for instance, Slashdot’s April Fools days run (GMT midnight to midnight). The event was designed to be October 15—not October 15 in a particular time zone. If you start with the first zone to reach a date, and run through the last zone to finish it, “October 15” would last about 48 hours.

I’m too sleepy to do the math myself, so I’ll trust Wikipedia’s entry on Time Zones:

So there you have it: a worldwide event tied to a calendar day but no time zone lasts 50 hours.

And here you thought things moved faster on Internet Time! 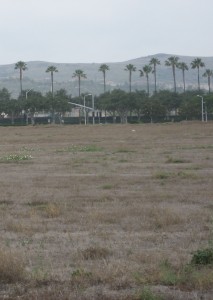 Over the last week or so, newspapers and radio announcements have been proclaiming that California is experiencing drier than usual conditions, already using its reserves for day-to-day living, and we should really start saving water now.

We really could have used this campaign earlier in the year. We knew by the end of spring that it had been a really dry season. There were articles in the newspapers, though they weren’t screaming for attention on the front page. Water districts were aware of it. Or, if you’re the sort to pay attention to such things, you might have noticed that the hills still hadn’t turned green by April.

But ads on the radio, encouraging people to conserve, plugging a website with water-saving tips?* I didn’t hear a single one until a few days ago.

I grew up in California in the 1980s, during which we had some really wet years followed by a major drought. It never got really bad where I was, but I remember a lot of little things that changed. Before, restaurants would set down one glass of water for each person, as soon as they showed you to your table. Afterward, they asked whether you wanted water. They taught us water-saving tips in school, like not leaving the water running while you brush your teeth, or taking what they called “navy showers”—turning off the water in the middle of the shower, when you’re not actually using it.

I’ve been looking around some sites on water conservation, and so many of the tips are things I remember from 20 years ago.

It seems like the population has been slowly forgetting these water-saving habits. Or maybe we’ve just had enough people come in from other areas that don’t have them. In the last few years, I’ve seen some restaurants plopping down those glasses of water without asking. I’ve seen people hosing down sidewalks. And while I turn the water off when I brush my teeth, I went back to normal showers years ago (though lately I’ve made an effort to keep them short).

And now, suddenly we’ve got a crisis on our hands.

A lot of the standard tips aren’t massive inconveniences. They’re simple tactics: Water your lawn in the morning, so that the water doesn’t evaporate before it has a chance to seep in. Fix leaks. Keep your showers short. Don’t toss stuff in the toilet that can go in the trash can. Use a broom instead of a hose to clean the sidewalk. These are things we should be doing all the time, not just when things get bad enough to start tossing around the “d” word.

Something to think about when things settle back to normal. Well, as normal as they get around California, anyway.

*According to the whois record, bewaterwise.com has been around for 4 years.

This morning I read about Blog Action Day, a campaign to get thousands of bloggers to write about the environment on October 15. I’ve actually got a draft post I’ve been working on that would fit the topic, so it’s an easy choice to make.

And for those of you who need a different kind of motivation, there’s a quiz: What kind of blogger are you?

I think that’s probably the first time I’ve ever been called a “socialite.” Frankly, I’m a bit disturbed. (And is it just my imagination, or does the drawing on that badge look a little like Neil Gaiman?)

Update Oct. 15: Here’s my post on water conservation in California. It’s actually not the one I had in mind, which I decided wasn’t quite on target, but I had some other ideas bouncing around in my head.

Update September 2008: They’ve taken everything down from 2007, including the images for the quiz results. I pulled a copy of the banner from the Wayback Machine and uploaded it locally.