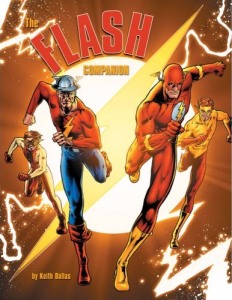 A couple of bits of news on TwoMorrows’ upcoming book, The Flash Companion by Keith Dallas. This is the book for which I wrote several articles last fall.

First, the book has been scheduled for July 23, which brings it out just in time for San Diego Comic-Con.

Second, I noticed this week that Amazon is offering 26% off on pre-orders, bringing it to $19.81.

I’ll let the official summary speak for itself (with a bit of reformatting):

Also featured are “lost covers,” never before published commission pieces by Flash artists throughout the decades, a Rogues Gallery detailing The Flash’s most famous foes (including 3 profiles by the author of this website) a tribute to late artist Mike Wieringo by Mark Waid, a look at the speedster’s 1990s TV show, and “Flash facts” detailing pivotal moments in Flash history. Written by Keith Dallas, with a cover by Don Kramer (Detective Comics, JSA) with colors by Moose Baumann (Green Lantern).

I’ve contributed three articles to the Rogues Gallery section, and a convention photo. I’ve had a chance to read some of the other articles and interviews, and this is going to be a great read for Flash fans!

Edit: One more item: This is small press, and I’m not the main author on the book, so I’m not getting paid for the articles I contributed. But I do have an Amazon Affiliate account, so if you order through this link, I’ll actually get paid a little in a roundabout way.

I just turned in final drafts for the last of three articles I’m contributing to TwoMorrows’ upcoming book, The Flash Companion by Keith Dallas.

The book covers the entire history of the Flash, from Jay Garrick through Barry Allen, Wally West, and Bart Allen. It’s full of articles, artwork, and interviews with writers, artists, with a cover by Don Kramer and Moose Baumann. My articles are part of the Rogues Gallery section.

The Flash Companion is due in July* 2008, and is already available for pre-order on Amazon.

Also worth checking out: some interesting tidbits on a related Comic Bloc forum thread. [Edit] Sadly, these were lost when the board crashed in May 2008 and had to restore from a 7-month-old backup.

Now, off to celebrate. Happy new year, everyone!

*Update: (January 10) – I’ve just been informed that the release date has been pushed back to July.