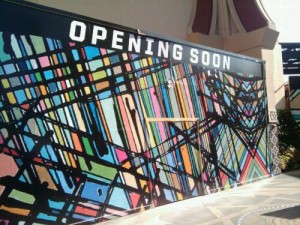 Remember that mall mystery from a while back? There was a storefront under construction at the Irvine Spectrum with an “Opening Soon” sign, but no indication of just what store might be moving in. They opened in December, and I keep forgetting to post a follow-up.

As you can see, all is revealed: 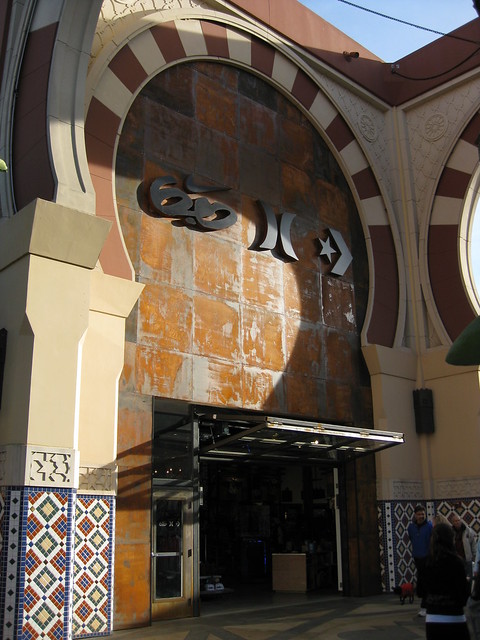 Unless, of course, you recognize the logos for Hurley International (middle), Converse (right) and…what’s that on the left? With the Nike swoosh on top and the…skateboard? Sunglasses? Something on the bottom?

It’s kind of a throwback to the old medieval-style signs that showed an image instead of a name: the Prancing Pony, for instance (to pull an example from LOTR). Only instead of recognizable images, they’re symbols. Pictograms, if you will, only decipherable if you’re familiar with the symbols already, and they’ve actually thrown an obstacle in the way by muddling the most-recognized logo (Nike).

It seems odd to deliberately use a sign that would make a store hard to name (never mind figuring out what they sell), but I imagine that their target audience is quite familiar with the logos and wouldn’t have any trouble finding the store.

You know how tarps stretched across fences will often have holes cut in them to allow the wind to pass through, rather than turning them into sails? This fence around a construction site had half-circles cut into each segment. Someone with a sense of humor had altered several panels, though: 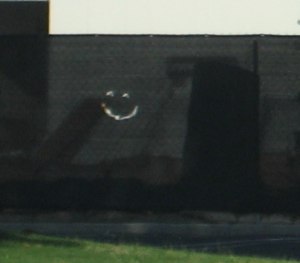 Which brings me to this sign spotted on the ring road at UC Irvine a few months ago: 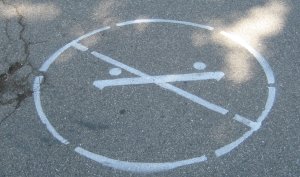 My best guess was “No bored vampires,” but that didn’t seem likely. After walking to the other side, it became a bit more clear: 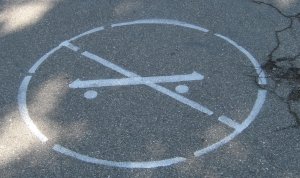 Aha! No skateboarding! Though it could easily be “No flat dollies.”