This may be a bit longer than asked for, and I thought about breaking it into smaller pieces, but I decided it would be more appropriate for a Gemini post to be one single unit.

By 1990 my family had moved on from Atari’s home computer line to what was then known as an “IBM Compatible” PC. I missed out on the BBS era, except for one time we had to download a software patch. My first taste of being online came through walled gardens during my last year of high school:

Prodigy, which I seem to remember having a GUI frame around a mostly text interface (except for banner ads in the frame). I think it even ran under DOS. I remember looking at some message boards about theater, but that’s about it.

AOL, which at the time was much friendlier to use, ran on Windows, and had its own system of message boards, email, etc. But again I don’t remember much about what I did with it until later on.

Then I got to college and discovered “Mosaic” at the computer labs. This web thing was really cool! There was a database of movies that I could search, I could find all kinds of sites on this collection of categorized links called Yahoo!, and people were posting things like fan pages collecting all of the Animaniacs cultural references!

There was a campus-wide Unix network that you could connect to through a dial-up terminal app, or the WYSE terminals scattered around campus. Windows and/or Mac computer labs at major departments. The engineering, computer science, etc. labs also had bullpens full of graphical UNIX terminals (I think they were the classic Sparc “pizza boxes” running SunOS and later Solaris), which was how I first encountered Mosaic and Netscape.

Back at my dorm, though, I had to dial up to a terminal. I could use text-based applications like Lynx for web browsing, or PINE for email. Sometimes I’d check my email (a string of auto-generated letters and numbers based on my major at a fourth-level domain based on the department that handled student email) at a text-based terminal in one of the computer labs or scattered around campus.

END_OF_DOCUMENT_TOKEN_TO_BE_REPLACED 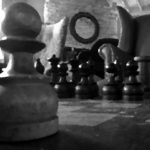 UCI Drama’s production is a concert staging of the show, with the orchestra and choir onstage, and the actors carrying handheld microphones with minimal props. It works well, especially for the more 80s-pop numbers like “Nobody’s Side” and the big ensemble songs like “Merano” and the chess games, though it gets a little awkward when the characters are singing to each other with microphones. (The show features two competing styles of music, achingly 80s and classical musical theater.)

The show’s structure is fluid, with vast differences between the original London and Broadway versions and later productions, and just about every version tweaking the story and moving songs around. This version largely follows the London stage version, with a few key changes:

The performances were all solid, with Molokova in particular as a standout.

An aside: I found it interesting to see an actual production of Chess at UCI, since the songs had been so popular with the musical theater crowd when I was there in the 1990s. “I Know Him So Well,” “Heaven Help My Heart,” and “Someone Else’s Story” were standards in the library, and I heard them a zillion times, while all the guys who were serious about musicals wanted to sing “Anthem.” And really, can you blame them?

I’m still not sure how well “Someone Else’s Story” works for Svetlana, but that ship has sailed. And “One Night In Bangkok,” despite being instantly recognizable to anyone who lived through the 80s, is cringe-worthy now. For this production they downplay the stereotyping by playing up the fact that it’s seen through the perspective of a total lout (Freddie). It’s still cringe-worthy, but at least it’s a character statement rather than a narrative one.

The production continues through this weekend.

Here’s a cool project: In Ansel Adams’ Footsteps, re-creating his photographs of UC Irvine from the 1960s. There are a lot more trees now. (Or, as a friend pointed out, the trees that were there are a lot taller!) It’s a really impressive look at how the campus has changed…plus it’s always fascinating to look at Ansel Adams’ photography. I remember when I was in college, prints of Adams’ photos lined the walls of one of the Student Center hallways.

A couple of years ago I did my own then and now project — well, less a project than a spur-of-the moment 2007 re-creation of a 1997 photo I took of the Student Center as seen from what was then the Humanities Office Building (now Murray Krieger Hall). In this case the trees hadn’t changed much in 10 years, but UCI had flattened the Student Center complex and built an entirely new one.

We went to Wayzgoose* at UCI on Saturday, which meant getting our annual taste of what’s changed about the college campus. I’d caught the new Student Center last fall, but Katie hadn’t been back since last year, before it was finished.

Some of the meeting rooms buried in the hill still remain from the previous building. In a food court next to the bookstore, I found a window looking down on this familiar-looking atrium. 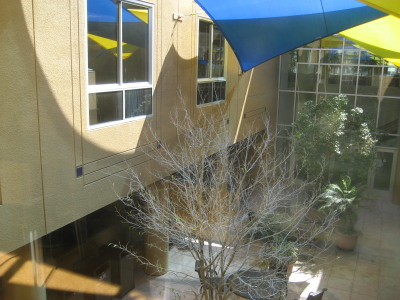 Through the glass paneling is a stairway that leads up to the ring road entrance. Clone Copy and Clone Notes used to be on the lower floor to the right (off-camera). In the mid-1990s, the area below the overhang to the left was a pool hall whose name escapes me. I think they converted it to a study area when they remodeled the upper floor to create Zot Zone (which has since been demolished and relocated). The area where I was standing used to be an outdoor walkway connecting the main courtyard to the bookstore.

What was really odd was the west food court, where my brain kept trying to overlay the old layout even though I’m sure they ripped out and replaced that section of the building entirely.

The sad thing, though, was that they’re tearing up the large grass area in the middle of the Claire Trevor School of the Arts and putting in another building. Everything in the quad bordered by the Claire Trevor Theater (formerly the Village Theater), the Studio Theater, the scene shop, Studio Four, and the drama offices is a big fenced-off area of dirt. 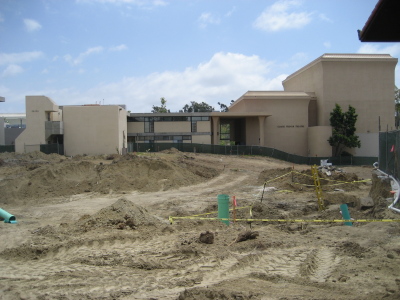 Aside from the usual uses for a lawn, it was a great place for people to rehearse. It’s not clear how much of the fenced-off area will actually be turned into a building, but they may have finally finished paving the entire school.

I found it a rather ironic discovery to make at this time, considering that Wayzgoose/Celebrate UCI is also combined with Earth Day.

*Update 2019: Since the link seems to be dead, some context: Wayzgoose was part of Celebrate UCI, a combination festival, open house (for prospective sutdents and parents), and club fair. It started with a medieval theme in the 1970s, though by the 1990s that was already fading. Once that was gone, there was a slow shift of emphasis away from Wayzgoose and toward Celebrate UCI as far as branding went, presumably because nobody knows what a Wayzgoose is, but everyone knows what a celebration is.