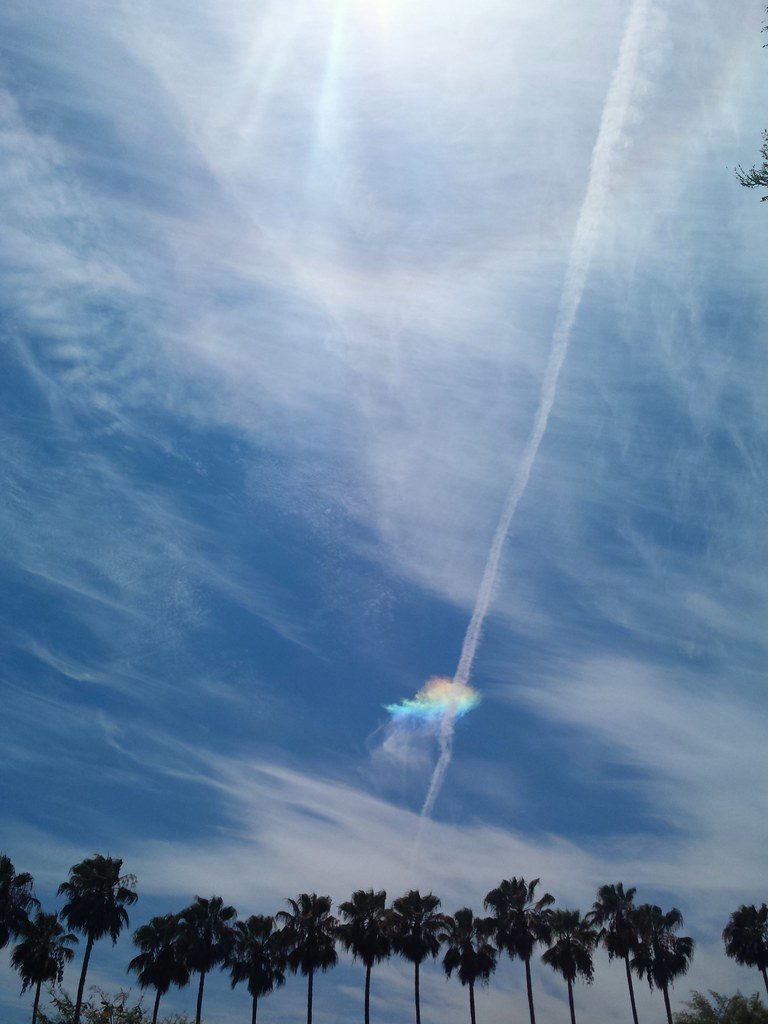 I noticed the halo around the sun as soon as I walked out the door for lunch on Thursday. The rainbow cloud? That appeared as I walked past a building. I saw it as soon as the southern sky came into view again.

The colors got more intense over the next few minutes, and I kept taking photos until my phone locked up. I stood there watching the colors intensify, then fade, while I pulled out the battery and waited for the phone to reboot.

A man who’d been sitting nearby, buried in his phone, looked up wondering what I was taking pictures of. He’d never seen anything like it before, and wondered what it was, and fortunately I was able to answer.

At the right angle, ice crystals in a cirrus cloud refract sunlight to produce a feathery rainbow effect. The circumhorizon arc runs parallel to the horizon, and while it can be long, it’s usually only seen in fragments like this. I’ve only seen a few of these myself, and it’s been years since I’ve seen one this intense. I took this photo through my polarized sunglasses, but the colors were bright even without them.

When my phone froze, he offered to send me one of his pictures just in case mine hadn’t actually saved. Fortunately they had, and I actually posted to Flickr several hours before his message made it through the cell network.

Within a few minutes, the cloud had drifted out of alignment, and the colors had faded completely.

An hour later, on the way back from lunch, I noticed a longer patch in a smoother cloud layer, but it was faint enough that I could only barely see it with my sunglasses on. Without them, it faded completely into the glare.

If I’d had my better camera with the zoom lens, I would have gotten some better shots of just the bright cloud. Then again, I wouldn’t have been carrying it with me to lunch, and the effect was gone in the time it would have taken to run back in and get it. So it’s probably just as well I stayed and watched instead.

Funny thing: I posted a cropped view on on Instagram featuring just the arc fragment and contrail. When I went back to look at the #rainbowcloud tag last night, I found no less than SIX other photos of what was clearly the same cloud at various points in its five-minute lifetime! 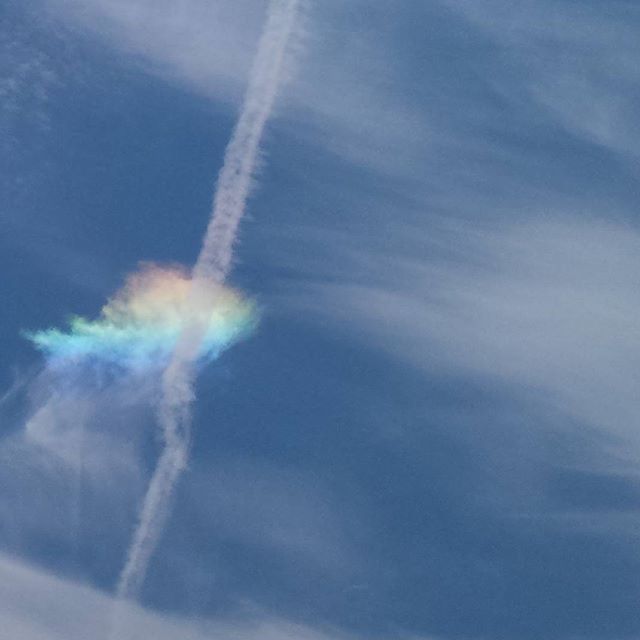 Late Halloween night, the first rainstorm of the season blew through town. By morning, it had mostly passed over us, but there were enough clouds around to make things look interesting after I dropped off my car for maintenance. With a couple of hours to kill, I walked to downtown Manhattan Beach for breakfast. I kept going all the way to the pier first, and was glad I did — otherwise I would have missed this: 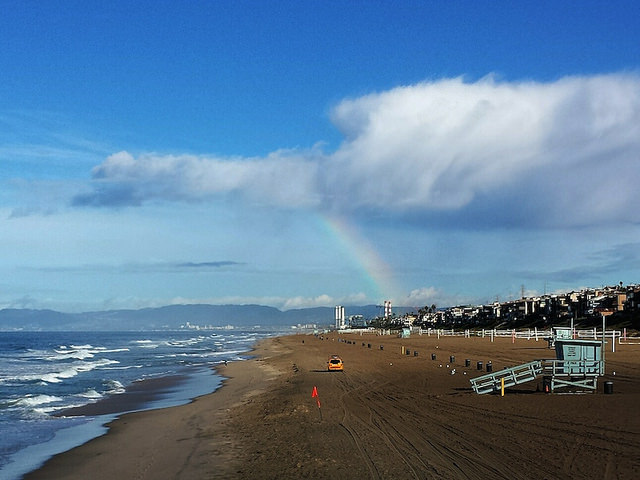 One straggling cloud continued to drop rain on the coast a few miles to the north. A rainbow fragment neatly arced from the cloud down to the El Segundo power plant. (I thought that was kind of ironic.) END_OF_DOCUMENT_TOKEN_TO_BE_REPLACED

We’ve had a couple of storms run through Los Angeles over the past week. Last Friday, I went up to the top of a parking structure after work to look at the clouds, and stayed to watch a double rainbow and the play of light at sunset. 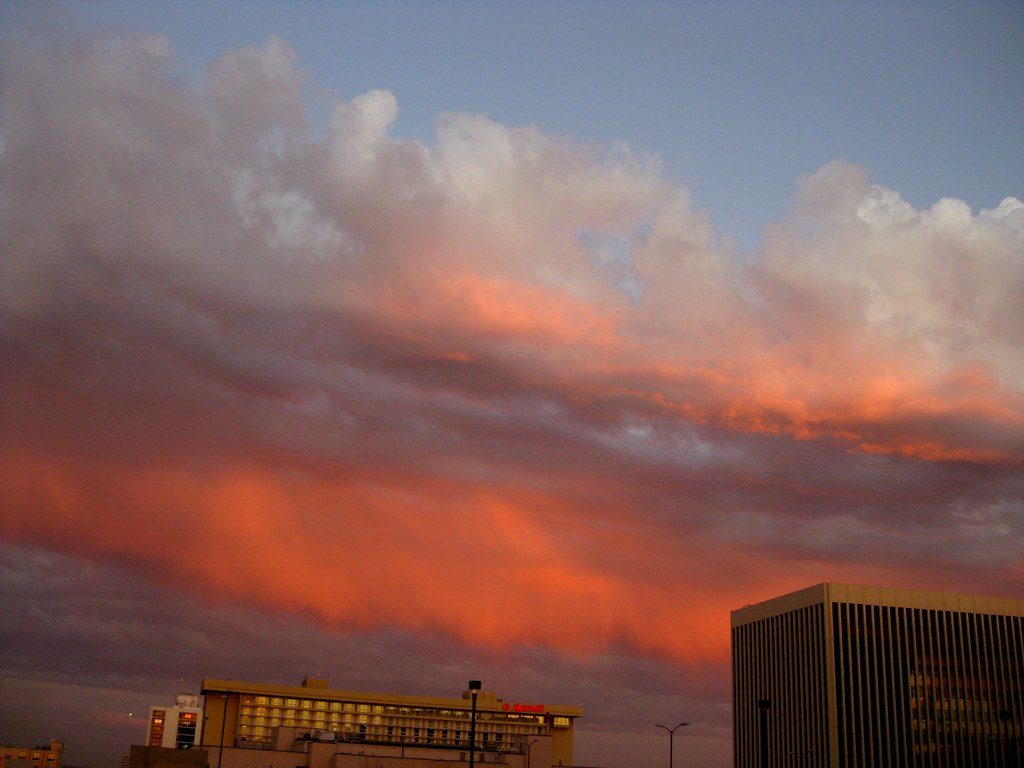 This was the view that surprised me the most: Bright orange (a little more magenta in real life than it looks here in the photo) on the underside of the clouds, but plain gray on the sides.

END_OF_DOCUMENT_TOKEN_TO_BE_REPLACED

This afternoon I found myself entertaining the notion that Orange County, California had somehow switched places with Orange County, Florida. The weather was certainly more typical for Florida in July than California. 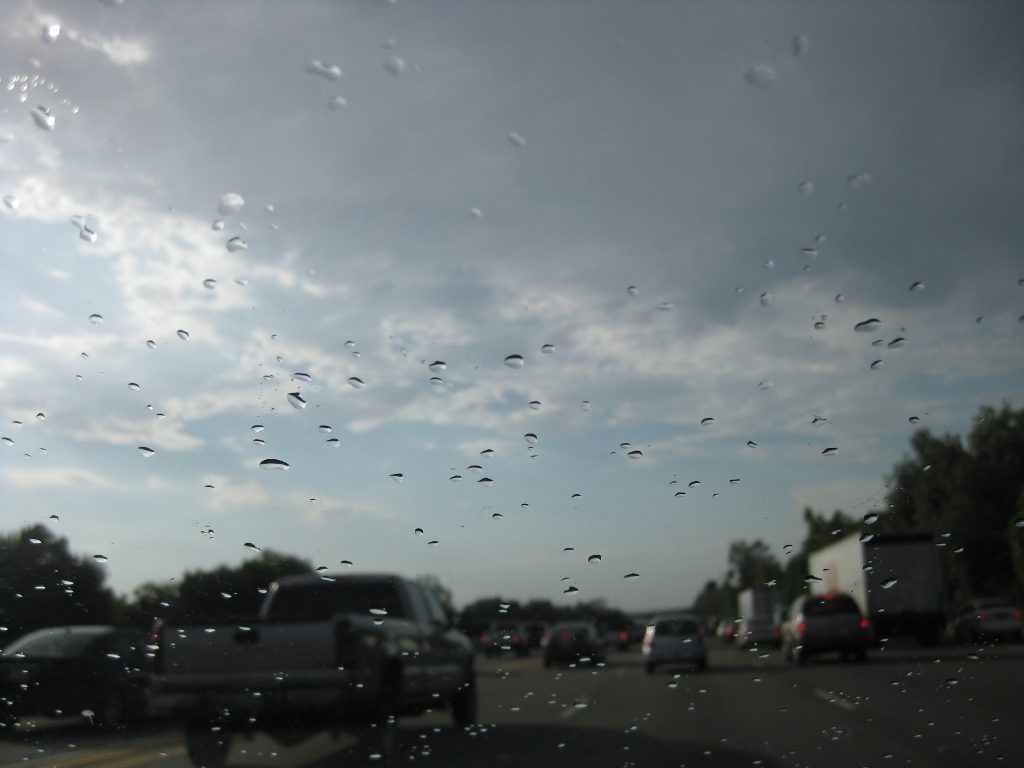 It was 90 degrees and sunny when I left the office a little after 6:00 pm, though the eastern half of the sky was dark with clouds. It started raining before I pulled out of the driveway. Just a little. I was halfway home before I decided enough of the raindrops were staying on the windshield that it would be worth turning on the wipers. 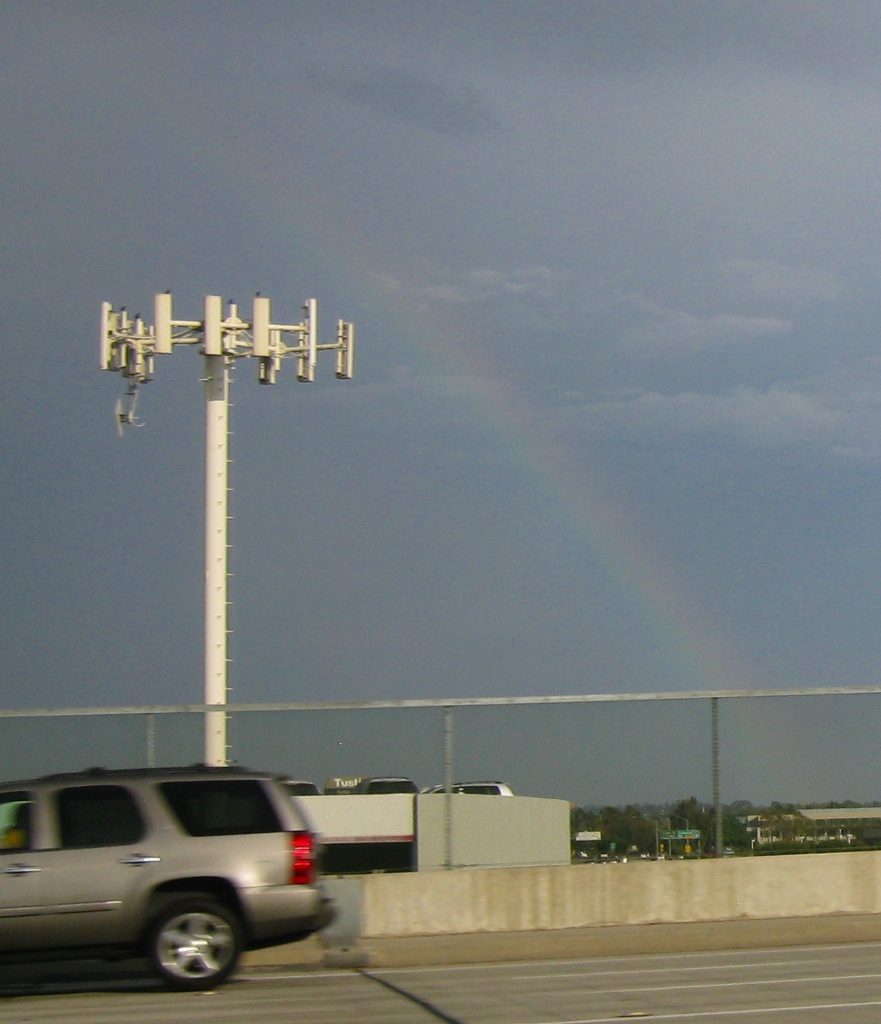 It was still spattering a little when I got home, but nowhere near enough to soak the ground. The drops were evaporating quickly. A far cry from the heavy rain and thunderstorms a few miles farther inland.

The rain’s stopped here, and the half-and-half cloud cover and sunset are giving the sky a dingy yellow color. 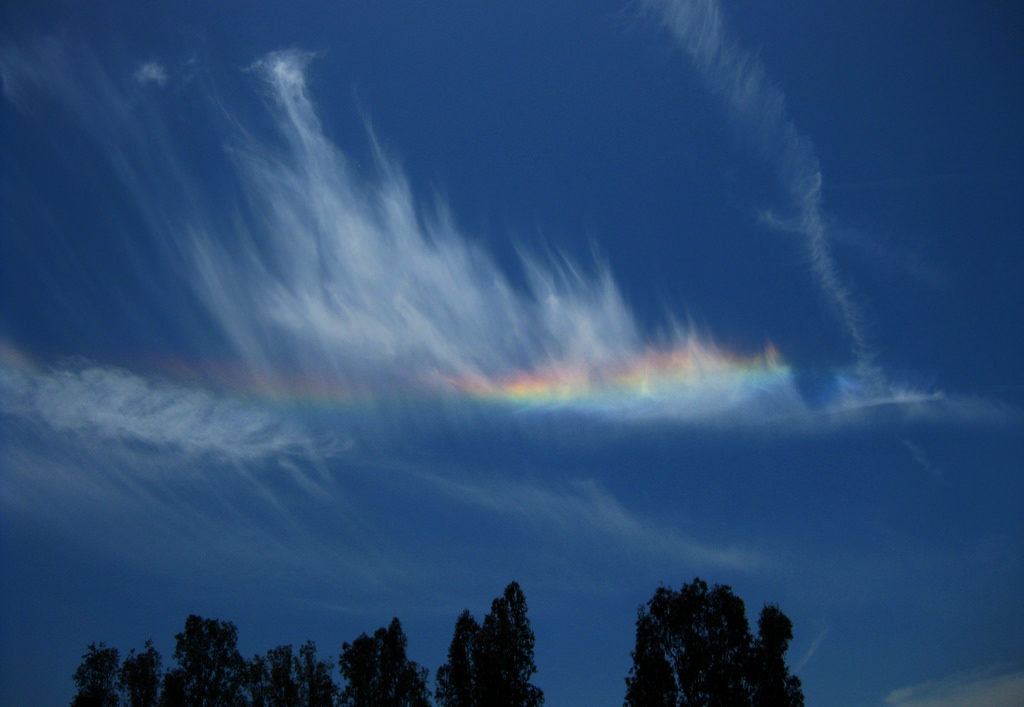 I saw this amazing circumhorizon arc around 1:30 this afternoon. I had just crossed the street while walking to lunch when I looked up, saw it…and walked back to the office to get my camera!

It started out as just a couple of small segments, but as the clouds drifted into position it quickly grew, and at its strongest it was just long enough to fill the field of view on my camera. There were also a couple of fragments of a 22° circular halo visible at the time.

The whole thing had vanished by 1:50, as the clouds drifted out of alignment, though I did see a more complete circular halo later on.

It looks like a sort of straightened-out rainbow, but it’s actually caused by ice crystals. If the right type of crystals cover the entire sky, this will actually stretch in a circle all the way around the sky, parallel to the horizon.

They’re a lot less common than the 22-degree halos. I’ve seen and photographed a ton of those over just a few years, but this is maybe the second time I’ve seen something like this. Fourth if you count the two feathery fragments I’ve seen.

At times like this, I really wish I had a DSLR, but the point-and-shoot will do in a pinch.

*On the other hand, when I went back, I pointed it out to a couple of people at the office who are into photography, since it was visible through the windows on one side of the building. One of my co-workers has a digital SLR and carries it with him, so he went outside and got some great shots. If I hadn’t taken a late lunch and chosen to walk anyway and been in the habit of looking for halos and forgotten to bring my camera, chances are no one in the office would have seen it.

Update (May 17): I just discovered that there are people who think these clouds are connected to earthquakes. No, they aren’t. They’re caused by ice crystals refracting sunlight, just like most halos, and have been seen in many places that didn’t have earthquakes.