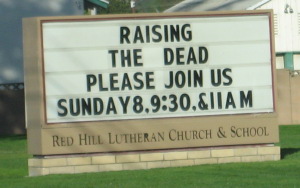 Well, when you come down to it, that’s what Easter is about. But when you put it that way, it just sounds like the stuff that most churches rail against.

I was thinking about a discussion on last month’s Flash #226 and got to thinking about the way religion figures into mainstream comic books. Not the way religious characters are portrayed, but the way the fictional world works. I’m not familiar enough with Marvel (though I can make some guesses based on the presence of Thor), but DC seems to have an “anything goes” cosmology: current scientific theory coexists with the Christian God, Heaven and Hell, with gods and other supernatural beings from various mythologies—some of them made up, like the Lords of Order and Chaos—occupying their own corners of the universe.

That’s probably what you want for a long-term, open-ended shared universe, because it gives you the most opportunities for stories. Want to write about an alien race that lived billions of years ago, or evolved from cats? Check. Have a fallen angel join the Justice League? Check. Tie Wonder Woman’s origin directly to the Greek gods? Check. Use made-up alien gods to explain the Greco-Roman split? Check. Power up half your villains and a handful of heroes as they sell their souls to a devil? Check. Pit the spirit of God’s wrath against a 50,000-year-old immortal ex-caveman? Check. Send some characters to Heaven or Hell, but have others destined to be reincarnated over and over again? Check. Observe the hand of God at the moment of the big bang? Check.

There are a couple of limits. DC seems to avoid ascribing a particular religion or denomination to any of their A-list characters, probably so that readers can just assume it’s their own (kind of like setting a story in “Anytown, USA”). And they avoid direct portrayals of God or Jesus, probably for the same reason. END_OF_DOCUMENT_TOKEN_TO_BE_REPLACED

Various outlets have reported on the recent appearance of evangelical spam—unsolicited bulk email which promotes religious messages instead of advertising products. It’s been pointed out that since CAN-SPAM refers to commercial mail it can’t be used to stop people who bombard you with other types of messages.

I’ve seen 419 scams with religious trappings for months. These are the usual “Help me smuggle $20 million out of my country” ploys with the added twist of “Oh, I’m a missionary” or “I’ll donate it to an orphanage” or “You can trust me, I’m a Christian,” usually tied to a middle-eastern nation where Christians are in the minority (because Nigeria is so passé). Of course the only thing the scammers really worship is the almighty X-MILLION US DOLLARS. It’s a cheap sympathy ploy, nothing more, made obvious by the fact that, well, it’s a scam!

Today I saw a new variation on that tactic: instead of appealing to Christians, this one was appealing to Muslims. It was all about some Muslim convert in Cuba who had been abandoned by his Catholic family and just needed to transfer $12 million out of the country… all sent from a UK-based email account.

On a side note, I’ve found myself wondering lately why so many of these seem to come from European ISP Tiscali, particularly Tiscali UK. (One came through yesterday with 119 copies of the standard footer!) I assume they must provide easy-to-get email accounts, or perhaps connectivity for a lot of Internet cafés. It also suggests that quite a few of these scammers aren’t anywhere near the (mostly) third-world nations where they claim to live.

Time to add an “outrage” category. This is just insane: A church panel has invalidated a girl’s communion because she can’t eat wheat (original article here).

The girl has celiac disease, which means any amount of wheat can cause her serious health problems. A local priest was willing to let her use a rice-based wafer, but higher-ups declared it was invalid — that if there wasn’t wheat, it didn’t count. She can either take the communion with a wheat-based wafer, or not take it at all.

For all intents and purposes they’ve excommunicated this girl because of a medical condition.

I wonder if the church would be willing to pay for emergency room visits (or funerals) resulting from this kind of situation?