Just yesterday, I had no idea there was going to be a lunar eclipse this morning. Then I skimmed an article somewhere and got the impression it was only going to be visible on the east coast, And then I read about it on Bad Astronomy and realized I had it backward. Not only would I be able to see part of the eclipse, but I’d be able to see the moon in totality! All I had to do was get up early in the morning and find a place with a clear view of the western horizon. I considered driving down to the beach at 5am, but thought I’d start out by seeing how visible it was from home. As it turns out, I should have gone to the beach to start with, but I had some good viewing before I left.

So I set my alarm, woke up at 5am (plus the snooze button), and went out to see what I could see. To my surprise, I actually had a decent view of the partially-eclipsed moon from across the street. It was about half-covered at this point (as shown in the first photo above). So I stayed out there for a few minutes deciding what I wanted to do, went back in to have some coffee and breakfast, then went back out shortly before 6 to watch as the umbra covered the disc the rest of the way. I found it interesting that it didn’t look particularly reddish this time, just brown.

Awesome viewing, though it was clear the moon would dip below the roofs of the houses soon. I needed a less obstructed view.

As soon as the moon went into totality, I went back inside, woke up Katie just enough to let her know I was going, tossed the rest of my coffee in a travel mug and hightailed it down to the beach. END_OF_DOCUMENT_TOKEN_TO_BE_REPLACED 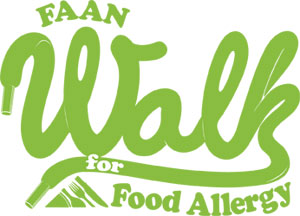 The Food Allergy Walk went well. There was a good turnout, apparently the highest yet for the Los Angeles event, which is in its fourth year. According to the event website, they raised about $43,000 of the $50,000 they had aimed for, but that’s only online donations. They may get closer once cash and checks are counted. Thank you again to everyone who sponsored us! You helped us raise $1040.05 for the cause ($120 of it offline) between the two of us!

The route was one mile each way along the walking path behind the beach up to the Santa Monica Pier and back. It ended up being overcast and chilly, a far cry from the 77 degrees and sunny predicted a few days ago, but at least it worked out well. Afterward we went to Café Crêpe for lunch.

In early August, we went up to Santa Monica to visit my brother and his colleagues as they returned to Florida from Wikimania 2007 in Taipei… with a 10-hour layover at LAX.

We carpooled with my parents, and arrived while the group was still stuck in customs. So we wandered around the Santa Monica Promenade and pier for a bit. Not surprisingly, there were some strange things about, like this turtle-themed drinking fountain. 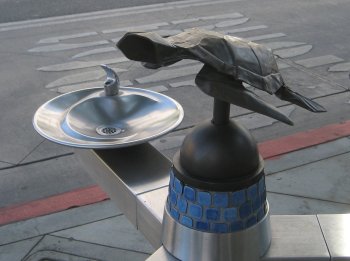 Then there was this sign, on the Johannes van Tilburg Building, which I couldn’t quite decide how to take. “Free Will?” “Free Willy?”

The most disturbing was probably this mash-up of two movies on one of the many theaters on the promenade:

Is the American public ready for that film?

There are topiaries sculpted into the forms of dinosaurs scattered along the promenade. This stegosaurus came out the best: 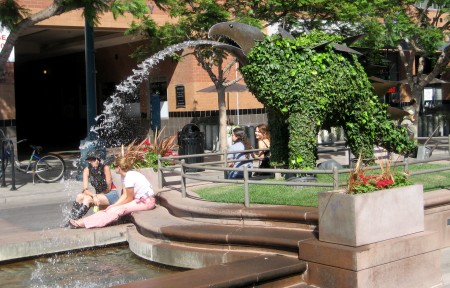 As I mentioned, we did wander out to the Santa Monica Pier after a bit. Nothing terribly odd, just a couple of photos to set the scene: 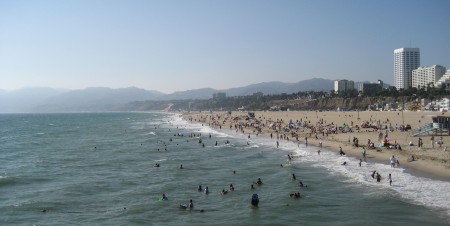