Off-duty cop fires ten shots at an unarmed intellectually disabled man and his family from twenty feet away, killing him and critically wounding his parents, because he pushed him in a Costco food line 3.8 seconds earlier.

No charges filed, because he had “no choice.”

And yet he had “no choice but to use deadly force.”

You’re seriously telling me there were no other choices?

It’s still not clear what started it. But the dead man had schizophrenia and was adjusting to a change in his medication, and his parents were trying to de-escalate the situation when they were shot.

Which the cop could’ve tried if he hadn’t started shooting immediately.

Found on a stamp vending machine: 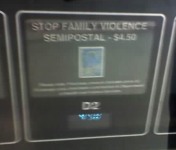 But given the prevalance of the term, “going postal” as associated with violence, perhaps using the label with the “Stop Family Violence” stamp was not the best choice. Now, I’ll apologize in advance for the gallows humor here, but would “going semipostal” be what happens when you want to go to work and shoot people but decide to stay home instead?

Late lunch today (there’s a news flash). Heard the last bit of an interview with Rob Zombie about The Devil’s Rejects, which was all over Comic-Con. Interesting perspective on the MPAA rating process, where he actually had to contact the MPAA directly to negotiate down to an R. Apparently after going back and forth on cuts with the studio as a mediator, he got to the point where toning down the villains made them seem less evil. Instead of making a film with violent villains, it was heading toward becoming a violent action film. After another round of calls directly with the ratings people, he apparently managed to get them to agree with him.

Also interesting: The MPAA will let filmmakers show much more graphic violence with a known celebrity than a B-list, cult, or unknown actor. With any commercial film, you know intellectually that the actor isn’t really being killed. But with someone you recognize, you have the added sense that there is no way that (for example) Brad Pitt’s skull is really being ripped open. With an actor you don’t know, your brain doesn’t have that extra disconnect layer and (in theory) takes it closer to face value.