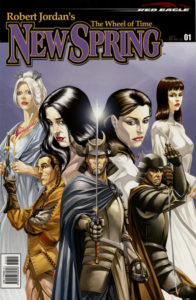 Dabel Brothers Productions has been much in the news this past week, between parting ways with Marvel Comics and landing a deal to adapt Dean Koontz’ work to comics. I first encountered them in 2005 when they produced the comic book adaptation of New Spring, the prequel to Robert Jordan’s Wheel of Time series.

That series was published through Red Eagle Entertainment, a company which appeared out of nowhere and seemed to have only two properties: comic book rights to New Spring and movie rights to Eye of the World. The comic started strongly, but delays led to the series ultimately getting canceled after only 5 issues of a projected 8. Red Eagle and Dabel Bros. each blamed each other.

There’s been very little information over the past year. Dabel has gone on to produce high-profile series like the Anita Blake comics, and Red Eagle has all but disappeared. (Even their website has removed everything but a logo and an email address.) I’ve just assumed it’s still been in arbitration or something.

For instance, I hear that word was floating about ComicsCon in San Diego that I am displeased with Red Eagle. Too true. Too very true. In a few more months that last contract they have with anyone on God’s green earth that so much as mentions my name will come to an end and we can see what happens after that. You see, among other things they forgot an old dictum of LBJ back when he was just a Congressman from Texas, when he famously, or infamously, said “Don’t spit in the soup. boys. We all have to eat.” Worse, Red Eagle though they could tell me they spit in the soup, or pee in it, if they wanted to and there wasn’t anything I could do to stop them. You can’t apologize your way out of that with me, not that they tried. There isn’t enough money in the world to buy your way out of it with me. Not that they tried that either. So they get no further help from me. Once they are completely out of the picture, we’ll see what happens.

So in a few months, all of Red Eagle’s WOT contracts are up. That’ll free up the movie rights, and while it may not resolve the contract dispute with DBPro over New Spring, there might not be much left of Red Eagle to block them from finishing the book. On the other hand, Dabel Bros. has plenty of other projects keeping them busy, so it might not be a high priority for them.

I am encouraged by the fact that DBPRo has gone through several site redesigns since the breakdown, and hasn’t dropped the New Spring section from their forum.