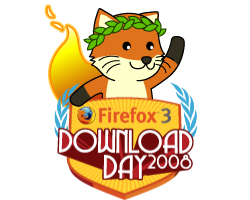 For the upcoming release of Firefox 3, the Spread Firefox campaign is launching Download Day 2008: a campaign to set a world record for the most software downloaded in 24 hours. Participants are asked to pledge to download Firefox 3 on the day that it’s launched. The exact date hasn’t been scheduled yet, but everything seems on track for June. (via The Mozilla Blog)

Update: The release date is June 17.