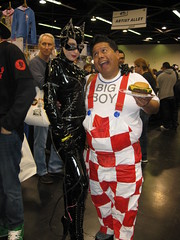 I checked out Wizard World’s new Anaheim Comic Con this past weekend. At only 10-15 minutes away, it seemed like a waste not to go, and with Anaheim courting Comic-Con International, I wanted to get a better sense of the convention center.

So I bought a Saturday ticket, drove out for the afternoon, and had a much better time than I expected.

Photos are at Flickr if you want to jump straight to them. 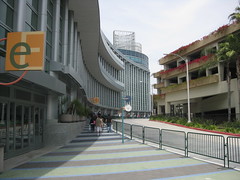 For those not familiar with the area, the Anaheim Convention Center is literally across the street from Disney’s California Adventure. There isn’t much in the way of public parking in the area that isn’t attached to a shopping center, a hotel, or Disneyland, but there was plenty of room in the convention center parking structure. Of course, it took more than 10 minutes to get into the structure — longer than I spent on the freeway!

There were two events at the convention center this weekend: Anaheim Comic Con in Hall D, and a Specialty Coffee event in Halls B, C and E. I was half-tempted to find out whether the coffee event was open to the public! 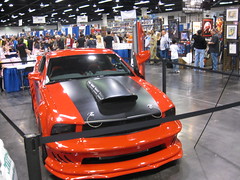 The first thing I saw when stepping onto the main floor was the Red Mist car from Kick-Ass (which opened this weekend). The second thing was the Suicide Girls booth. The third was a long line of people waiting for an event.

There was the usual mix of collectibles dealers, comics dealers, artists, celebrities, the ever-present giant T-shirt booth, prop & costume exhibits, fan groups, etc. There was a heavy Star Wars fan presence (more about that later). The one that really surprised me was the bar that had been set up next to the food service area!

The weird thing: There was virtually no industry presence. I’m not sure I saw a single comic publisher booth. In the battle between C2E2 and Wizard, the publishers came down solidly on the side of C2E2, not even bothering to send a token delegation to Anaheim. It can be done. Last year, DC did full-up DC Nation panels at both WonderCon (California) and MegaCon (Florida) the same weekend. 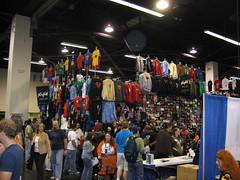 Compared to WonderCon two weeks ago, the main floor seemed bigger, but took less time to explore. Judging by the floor plans, the area actually used looks about the same, but the breakdown was different:

It was probably comparable to the last Wizard World Los Angeles, except that I remember a lot of empty space at that con, a bigger Artist’s Alley, and a smaller celebrity area. I’d actually guess that the celebrity area at this con took up about 1/4 of the floor space! 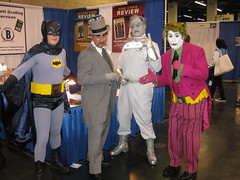 The Star Wars presence was probably a mix of two things: 1. Regional groups aren’t going to Chicago. 2. It’s the 30th anniversary of The Empire Strikes Back.

That included groups such as the 501st Legion, the Saber Guild, LA Jedi, and a group that builds working droids. 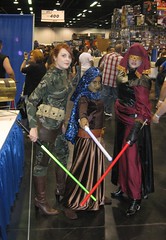 The Sabre Guild had a prime spot near the T-shirt booth and had set up a ring to perform mock lightsaber battles and demonstrate other skills. Sort of like a mix of fencing and tall flags with lightsabers. They also had music from the movies playing continuously all day, broken up occasionally by the disco version of the Star Wars theme. There were a couple of really good Aayla Secura costumes in that group, and a little girl wearing a Republic Jedi costume who at one point added a Hit-Girl mask and wig and posed in front of the Kick-Ass car.

The other big costume theme was the 1960s Batman TV series — almost certainly because the con had brought together much of the show’s cast, including Adam West, Burt Ward, Julie Newmar, Yvonne Craig and Lee Meriwether, and the Batmobile. 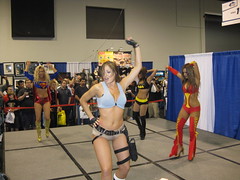 Because of the light industry presence, there weren’t many in the way of booth babes. The Evil Cheerleaders seem to be everywhere these days, plus there were cheerleaders for a energy drink called Bite Me. I was surprised at how many kids were posing with them, actually. Suicide Girls had a big presence, with at least a dozen models, and there was a dance troupe (the Purrfect Angels) who dressed in skimpy versions of super-heroine and sci-fi costumes and danced on a raised stage next to the lunch area.

Then there was the booth placement in the celebrity area, where a pair of 14-year-old girls who had written a science-fiction novel were placed next to a bikini model. Way to send the kids a message, Wizard. 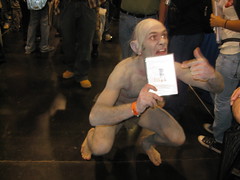 Late in the day, I was walking by where a man dressed (if you can call it that) as Gollum was crawling around, mewling about “My Precious” and showing off a DVD of an independent film with that title. This was at the corner of the celebrity area, where Nichelle Nichols was doing a signing. He crawled into her booth, jumped up on the table, started showing everyone “My Precious,” then turned toward the Star Trek actress. 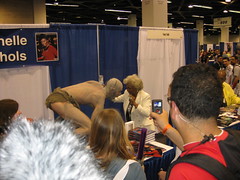 She yelped and started hitting him with a plastic water bottle, at which point he took a dive off the table and tumbled onto the floor, then scurried off.

He did pretty much the same thing with the judges’ table at the costume contest that evening. 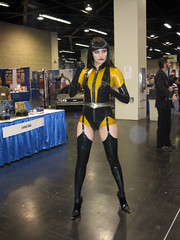 The costume contest was more organized than the one at the last Wizard World LA, though nowhere near as formal as, say the Comic-Con International Masquerade. Most contestants simply walked in one door, past the judges, and out the other. Actually, a lot of them early on hadn’t been told to pause so that the judges could see! A few had prepared simple routines, or at least speeches — including, as I mentioned, Gollum, who made the biggest impression. Some other stand-outs (some for craftsmanship, some for attitude) included Count Chocula, the Angel of Death from Hellboy II, Doctor Octopus, and Silk Spectre.

As I was going through my photos, I found it interesting that I had actually run into a lot of the winners out on the floor: Doctor Octopus, Gollum, Silk Spectre…

Concession stands line the edges between the exhibit halls: coffee, sandwiches, tacos, etc. I only had the coffee, which was decent, though the clerk warned us to use the swizzle sticks and not the spoons, because they might melt! All of the hotels in the convention complex have their own restaurants ranging from casual dining to somewhat more expensive places like Morton’s. The Hilton also has fast food including a Starbucks, Sbarro, Baja Fresh, and a smoothie place. 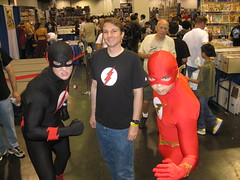 Across the street you can find standard fast food like Subway. The Ramada has an Indian restaurant with a lunch buffet. If you walk around Disney’s California Adventure to the west, you can get to the Downtown Disney shopping center. If you walk east along Katella, you can get to the Anaheim Garden Walk, which has a few mid-range chain restaurants (California Pizza Kitchen, P.F. Chang’s, etc.) and a food court that’s currently running at half capacity. Unless your name is Barry, Jay, Wally or Bart, figure on about 20 minutes to get there. The blocks are large and the traffic signals are long.

Tip: If you plan to cross the street, go out to Katella along the convention center first, not out to Harbor through the hotels. It’s just as long, but there are trees and shade. 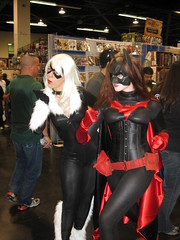 Assuming the other halls are about the same size as this one, I think the full convention center could probably handle something the size of the Comic-Con International exhibit floor. The main hurdle is that only about 1/3 of the wall between each section is actually removable (the middle section is permanent, holding the concession counters). Sure, it would make it easy to divide the main floor up into themes — one section for comics, one for movies and TV, one for games, etc. — but it would also create bottlenecks. 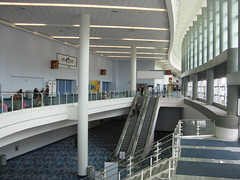 I didn’t get a good sense of the meeting rooms, since the con only used a couple of rooms, and I don’t remember much from the only other convention I’ve attended since the expansion. (It was a WorldCon, and I experienced the whole thing through the combined haze of a summer cold and Day-Quil.)

There is room to spill over into the nearby hotels, though. There are at least four in the same complex, and I know at least two of them have a good supply of meeting rooms and ballrooms. They’re closer to the center than anything in San Diego other than the Marriott, and they don’t require you to cross a busy street or railroad tracks.

Check out my full set of photos on Flickr.

Stopped for coffee on the way to Anaheim Comic Con. Yes, actually, I am wearing a Flash T-shirt. Why do you ask? 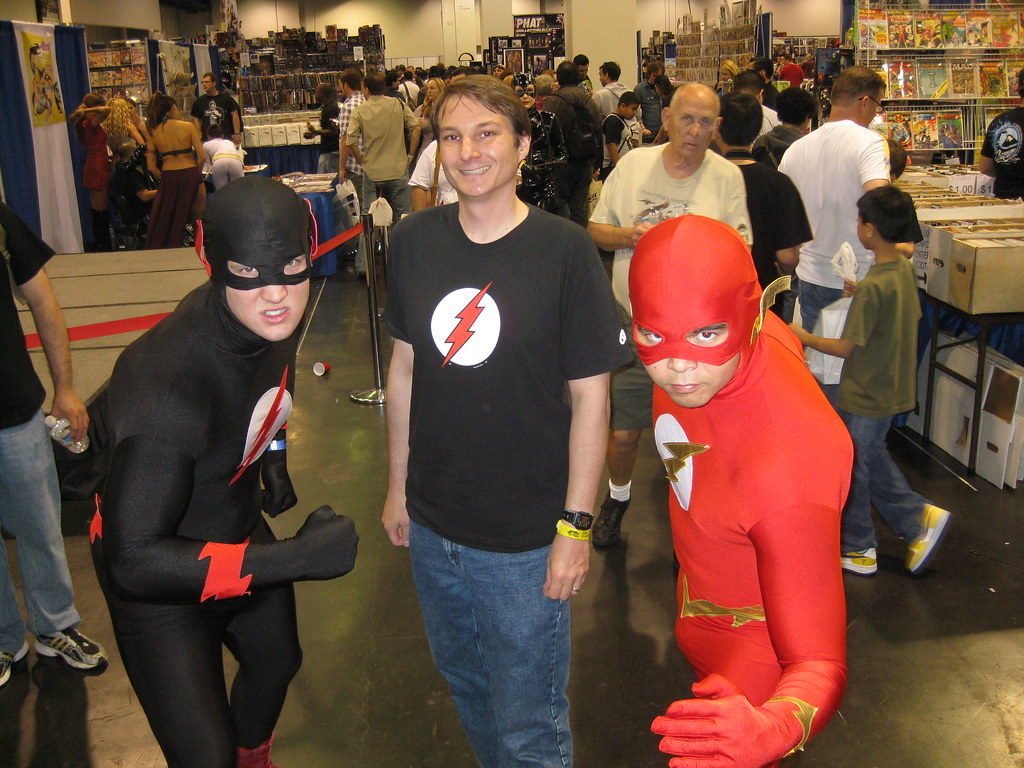 Even better, the rest of the convention center was taken up by a coffee convention! (For the uninitiated: There’s a running gag in the current Flash relaunch about how much coffee people drink in Central City…especially Iris Allen.)

Follow-up: read my full convention report and check out my photos.