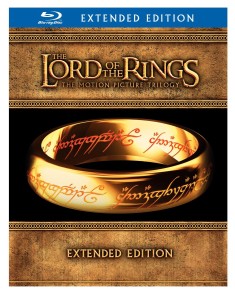 Amazon has started taking pre-orders for The Lord of the Rings (Extended) on Blu-Ray! I didn’t bother with the theatrical editions, partly because we didn’t have an HD-TV at the time, and partly because we both prefer the extended editions (even if they do take 11 hours to get through the whole trilogy).

I jumped at this one, though. Having recently watched Fellowship of the Ring on a big-screen TV on DVD, I could see places where the higher definition would really help. Battle sequences especially.

It’s worth considering that I still haven’t pre-ordered the Star Wars saga on Blu-Ray.

Yesterday I spotted a listing on Amazon for the complete Monty Python’s Flying Circus for $35. (It jumped back up to $55 today.) I was seriously tempted, but asked myself: how often would I actually watch it?

Since lugging around several boxes of CDs, DVDs, and even a few VHS tapes (no Blu-Ray yet) the last time we moved, I’ve asked this question (in the broader, two-person sense) about any video I’ve considered buying. If we’re only ever going to watch something once, we’re better off renting it. It’s cheaper and it takes up less space.

In this case, we borrowed the series from a friend a few years ago, so we’ve already watched it once. There’s plenty of good stuff, but I’d probably only rewatch a handful of sketches.

WTF? eBay says I can’t charge more than $3 to ship an item in the DVD category. I’m selling a 2-pound boxed set. The cheapest USPS rate is $3.16 for media mail. I appreciate the effort to prevent sellers from overcharging for shipping, and $3 leaves plenty of room for most DVDs…but apparently it hasn’t occurred to them that people might be selling larger boxed sets.

TV Shows on DVD reports that the second season of Pushing Daisies — the complete second season, including the final three episodes that ABC hasn’t bothered to show yet — will be coming to DVD and Blu-Ray on July 21. Just in time for Comic-Con.

The article is dated April 1, but they swear it’s not an April Fools’ joke, and indeed Amazon is accepting pre-orders with a July 21 release date. 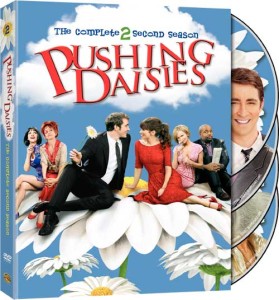 I’m still somewhat bitter at ABC for canceling the show, though not as much as I could be. It really did have “Too good to last” written all over it, and I’m still astonished we even got a second season (never mind that it managed to live up to the first one). Mostly I’m bitter that ABC held onto those last three episodes. They could have shown them at three in the morning. In a DVR world, fans would have managed to find them. Or they could have put them on their website, or sold them through iTunes.

Anyway, TV Shows on DVD has more box art and descriptions of the extras.