Two main things have changed: mobility (I couldn’t drive when I was 12) and the web. END_OF_DOCUMENT_TOKEN_TO_BE_REPLACED 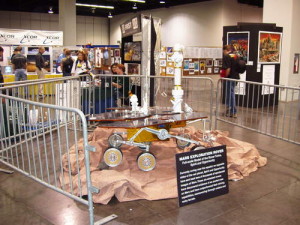 The cold that had been threatening me all last week finally hit on Friday morning, and I’ve spent the last four days in haze induced by a mixture of the cold and DayQuil. I actually went home early on Friday, dropped onto the couch, watched some Netflixed Justice League, and felt like I was staying up late when I went to bed at 9:00 or 9:30.

Out of sheer determination I dragged myself to Worldcon/L.A.con IV on Saturday. Katie stayed home since her main experiences with SF-themed cons were a few post-millennial Loscons, and Loscon was really going downhill at the time. Fortunately, this was more like I remember past Worldcons and earlier Loscons. 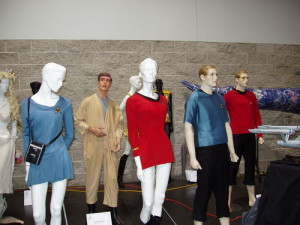 My parents are SF fans, and they regularly took me and my brother with them to conventions. As far back as I can remember, it was a Thanksgiving Weekend tradition to visit family on Thursday, have Friday free, then go to Loscon on Saturday and Sunday. As for Worldcons, I’d been to three before: L.A.Con II in 1984, ConFrancisco(?) in 1993, and L.A.Con III in 1996. (Hey, if Worldcon is on the order of a 10-mile drive, you may as well take advantage of it.)

So I staggered through the dealer’s room, the art show, the exhibit hall with original Star Trek costumes, genre cars like the Batmobile and the DeLorean from Back to the Future, mock-ups of the lunar lander and rovers. I went to some panels on things like “What will future historians get wrong about our time,” the rise of theocracy, fixing things that go wrong in space, and what past sci-fi got wrong about the present. 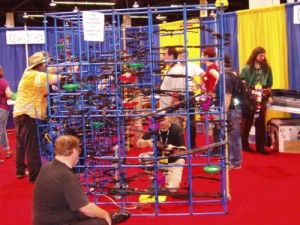 There was a group (IIRC, from a local college) with a bunch of remote-control robots. As I walked by, there was a college-aged group sitting and eating lunch from In-N-Out, one of whom had placed her hamburger (still mostly wrapped) on a little remote-control car, and was driving it around the floor, dodging obstacles (like feet). Then tragedy struck, and the burger fell off.

While I was in the art show, someone started up music nearby. The song sounded familiar, but I couldn’t place it until it reached the chorus. It was the “Make your own kind of music” song that was used in last year’s Lost season opener! The music turned out to be the accompaniment to a dueling artists bit. 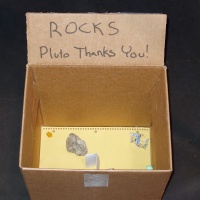 Someone had responded to Pluto’s demotion to “dwarf planet” and set up a display labeled Pluto Needs Rocks, all about a campaign to collect rocks and launch them at Pluto to increase its mass so it can clear out its orbit and get its status back as a planet. Yes, there was a collection box beneath the display. And yes, it had rocks in it. 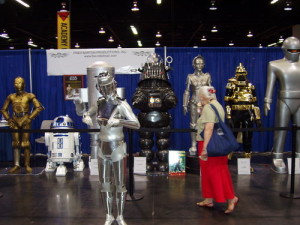 I ended up running into my parents and some family friends, and we set up a time to meet and go to dinner. I figured I had enough time to drive home, pick up Katie, and come back, as long as we met outside the convention. Unfortunately, the freeway was backed up, and I realized there was no way we could have made it back in time. (One of the family friends had something to go to after dinner.) I called to cancel, and by the time I got home, I began to realize I wasn’t really in shape to continue driving. I realized later I’d been running on DayQuil and willpower, and my willpower had just run out for the day. So I ended up collapsing on the couch as soon as I walked in the door.

I went to Worldcon 64/L.A.Con IV on Saturday. Mainly I went to a couple of panels, checked out the art show and the dealer’s room, and looked at some exhibits.

Out in the exhibit hall, near the art show, someone had set up this display: 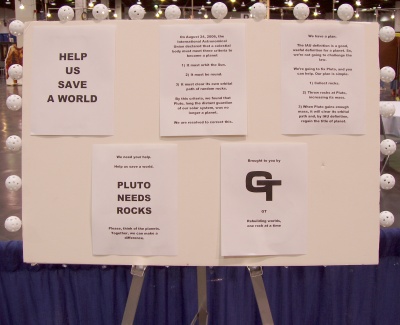 It’s too small to read at this size, so I’ve transcribed it: END_OF_DOCUMENT_TOKEN_TO_BE_REPLACED