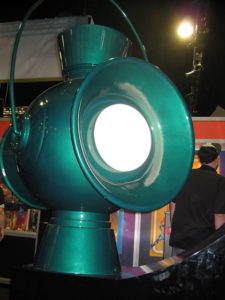 Yeah, I’m still working through this report. Here’s hoping I can finish before it all completely blurs together! Follow me back a few weeks, to Saturday, July 24 at the San Diego Convention Center. 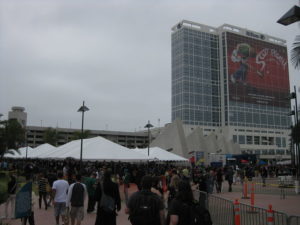 As usual, Saturday was the big day for big presentations. Katie got up early to wait in line for Harry Potter (and incidentally Sucker Punch and Green Lantern), figuring on taking the first shuttle to the convention center…which didn’t show up. After 30 minutes, it became clear that there wasn’t going to be room for everyone on the shuttle when it finally did show up, so she made the trek on foot. She picked up a spot on the lawn, out where they had canopies (not that they needed them with the morning gloom).

I slept in a bit longer before heading down to stand in line for Leverage, which was, well… Leverage was an experience in its own right. 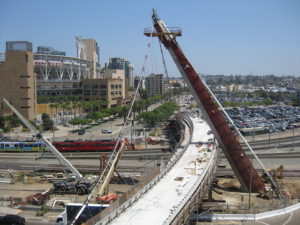 Afterward, I took the opportunity to do a little exploring over by the Hilton now that the sun had come out. Mostly I checked out the views of the convention center, but I also went up to the top of the parking structure to get a look at the pedestrian bridge that San Diego started building two years ago. That’s where I found a portable cell phone tower, showing that at least one network had made an effort to increase coverage for the event. 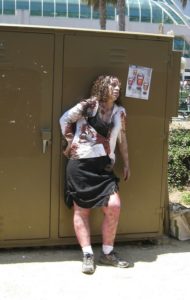 After another brief pass through the main floor, I headed out into the Gaslamp again. My plan was to go through the Scott Pilgrim Experience, especially since I’d heard that Saturday was the last day, but the line was hideously long. The line for “Stuff” wasn’t long at all, however, and it took me about two minutes to pick up a T-shirt and some download codes related to the soundtrack.

So I wrote off the Scott Pilgrim Experience (Cinematical describes what I missed) just like I’d written off the Hall H Experience, and kept going. Though I should have stayed a little longer: they were just setting up the truck with free garlic bread as I was leaving!

I had some time before Katie and I planned to meet at a shawarma place for lunch, so I figured I’d get some iced coffee first. 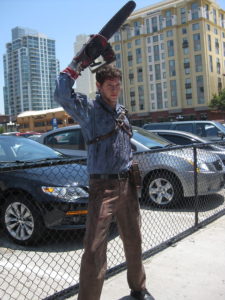 The convention always spills out into the city. Even beyond the Gaslamp crush of official and unofficial offsite activities, there are ads and banners everywhere…and convention attendees walking to and from restaurants, hotels and parking lots. At one point I walked by a couple dressed as Wonder Woman and Ash from the Evil Dead movies. Wonder Woman was drinking coffee or a smoothie or something, but I asked Ash to pose for a photo. I turned around and saw a couple dressed as Drusilla and Spike from Buffy the Vampire Slayer on the other side of the street.

So we met up at lunch, showed off swag (my Leverage: Mastermind shirt, her Harry Potter: Undesirable No.1 shirt), caught each other up on what we’d missed (the Green Lantern oath, Parker’s thoughts on Comic-Con, what the heck Sucker Punch is about), and showed each other pictures. Digital cameras have really changed the immediacy of photo sharing!

Back at the Con 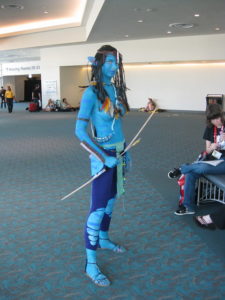 We each went our separate ways for the afternoon programming. I caught the No Ordinary Family preview, which looks promising, then figured I’d try getting into the discussion on Scott Pilgrim Vol.6. It was at least 20 minutes into the panel by the time I arrived, the series has been extremely popular, and the final volume had just come out a few days earlier; so I wasn’t really expecting to get in, and I wasn’t terribly surprised to find that it was full. I took the opportunity to dash off my first impressions of No Ordinary Family. Katie, meanwhile, caught a group of science-fiction authors discussing: “Welcome to the Future. Are you sure you want to stay?” 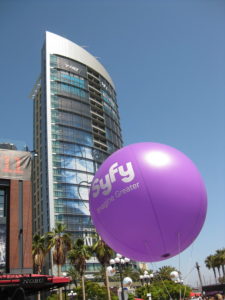 With no specific plans for the evening, but memories of Thursday’s cattle drive, we left about a half an hour before the floor closed so that we could catch a shuttle before the rush. We didn’t really need to, since the driver waited until it was full anyway, and didn’t pull away until almost 7:00. On the plus side, we spent that time in cushy seats instead of standing in a crowd, shuffling along. On the drive back to the hotel, we first heard vague rumors of the stabbing in Hall H earlier in the afternoon.

By the time we got back to the hotel and dropped things off, neither of us wanted to deal with getting back to the Gaslamp, or out to another part of town. Easy route: the hotel restaurant. It had a fixed menu for the evening, but at least it was food we could eat, and as I recall the steak was pretty good. The reason it had a fixed menu was the live music event…which had just wrapped up. Which was also why the restaurant was almost empty when we arrived. (And probably why they offered us extra parfaits for dessert.)

It was the most low-key experience I’ve ever had at a Comic-Con. And that was not a problem!

This was Saturday, July 24.
Next: Sunday. Castle, Merlin and Artists’ Alley.