The wind shifted during the day, and by mid-afternoon the sky near where I work was considerably clearer—even though the fire seemed to be getting closer.

Some geography: The Santa Ana Mountains run parallel to the coast, and form the northeast border between Orange County and Riverside County. Here are a couple of photos from older blog posts showing the hills and the mountains in the background (though from very different angles).

The fire “broke out”* in the foothills on the western side of the mountains. One side went straight over the line of hills and down toward the flatlands, threatening homes in northeastern Irvine last night. That was stopped, but it continued along the canyons to the end of this set of hills, and last I heard had reached the edges of neighboring Lake Forest.

I think the front may have gotten within 4–5 miles of where I work, though we couldn’t see anything but smoke in that direction until late in the afternoon. Every so often I’d wander over to a conference room that normally has a clear view. Off to the northeast, everything faded to brownish gray. It faded to the southwest as well, but at least I could see silhouettes of the hills in the opposite direction.

I did, however, watch ashes floating by horizontally, 4 stories up.

Toward mid-afternoon, the wind (and fire) shifted, moving the worst of the smoke plume away, and outlines became visible. I took this one around 5:30, and you can just see the (likely) charred and smoking hills. (Notice also the orange balloon off toward the left.) 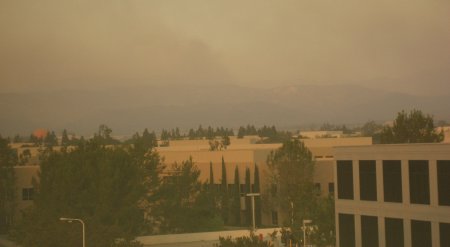 With all the smoke in the air, the sunset colors were intense. As the sun sank, it was a brilliant orange. 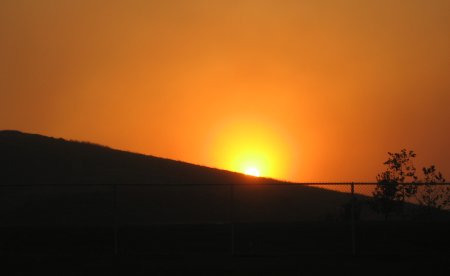 As it neared the horizon, dipping deeper into the layer of smoke, it turned almost purple, and was dim enough to look at directly. (Not that I stared—I’ve seen Pi after all!)

We got a break from the wind for several hours, which just ended minutes ago.

*Reports are that it was arson. What the hell is wrong with people who do this sort of thing? It’s not enough to set a bonfire, or even just burn down one structure—you have to burn down 15,000 acres of wilderness and possibly people’s homes?

One thought on “More Fire”